‘The stuff of nightmares’: when who you are becomes a crime

So crime is no longer about what you do, it's about you you are and who you associate with. Law lecturer Gabrielle Appleby traces the history of such "preventative" laws and asks some tough questions. 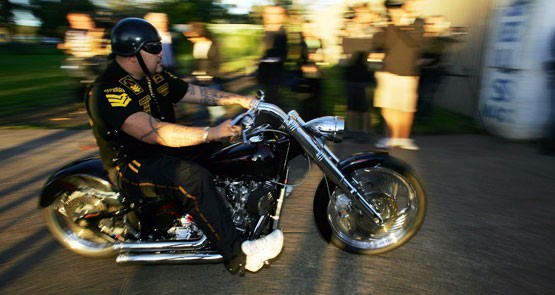 As states continue to roll out anti-gang legislation with gay abandon, it is easy to think that police are no longer concerned about what we do, but who we are and who we chose to associate with.

During the past decade governments have expanded and strengthened “status” and “association” offences. Despite human rights concerns, it is a trend that continues to build political momentum, bolstered by fear-mongering rather than proven operational effectiveness.

Nowhere is this more apparent than Queensland. In response to a bikie brawl on the Gold Coast last month, Premier Campbell Newman’s government used its legislative majority in the Parliament’s only chamber to pass several measures targeting members of “criminal” organisations. The government has declared 26 organisations, all motorcycle clubs, “criminal”.

The measures have included extraordinarily long mandatory prison terms for associates of a criminal organisation, new offences prohibiting members meeting in a public place, entering a clubhouse, wearing the club “colours” or recruiting into the club. Other measures reverse the presumption of bail for members and remove the privilege against self-incrimination. Rather than rely on existing legislation, some of which had been specifically introduced to target bikie-related violence, the government introduced new, untested measures.

In New South Wales the gang-related shooting of a girl last week has raised political interest in new offences targeting gangs. Premier Barry O’Farrell quickly flagged the introduction of mandatory minimum sentences for gang members caught carrying guns. This follows on the back of new legislation allowing the police to stop and search gang members without a warrant if a Firearm Prohibition Order has been made.

These trends have been building for some time. Today’s anti-gang laws can be traced to former prime minister Robert Menzies’ unsuccessful attempt to ban the Communist Party at the start of the Cold War. In a case that has become an iconic judgment in defence of the rule of law, the High Court struck down the legislation because it unilaterally declared the party illegal, with no opportunity for the court to review that assessment. Unfortunately, the constitutional brakes that the High Court was able to apply to Menzies in 1951 don’t apply to state premiers. States are subject to fewer and narrower constitutional safeguards.

The modern trend in criminalising status and association started in earnest with the federal response to the threat of terrorism after the September 11 attacks. The new federal legislation focused on preventative measures because of the enormous risk to life and property posed by terrorists. The measures were introduced as “extraordinary” legislation. Bob Debus, then New South Wales Attorney-General, said the powers “are not designed or intended to be used for general policing”.

However, it wasn’t too long before the states introduced similar measures in ordinary policing. State legislation targeted the public face of organised crime; bikies. Former South Australian premier Mike Rann declared bikies “terrorists within our community”. But Rann’s rhetorical analogy between organised crime and terrorism is flawed. Organised crime is motivated by profit, lacking the political, religious or ideological motives associated with terrorism. Organised crime-related violence is predominantly targeted at other organised criminals or their associates, with members of the public harmed as collateral damage, not because they were the primary target.

SA started the trend in 2008, introducing a system of control orders that could be made against members of associations declared to be criminal by the Attorney-General. The High Court struck down a key provision of the legislation because it required the courts to act at the dictate of the government. A similar fate awaited the NSW control order legislation. However, earlier this year the High Court upheld Queensland’s slightly modified version of the scheme. The Queensland law has now been largely replicated in other states, although no organisation has yet been declared criminal under it.

States haven’t stopped at control orders. Members of declared organisations are targeted by new offences, restrictions on access to certain industries, and mandatory minimum sentences. In NSW and SA, the old crime of consorting with criminals has been reintroduced, although the NSW consorting law is under challenge by the Nomads motorcycle gang on the basis it breaches the constitutionally protected freedom of political communication and association.

These preventative policing trends have deservedly attracted widespread criticism from lawyers and civil rights groups. Status and association offences offend fundamental civil and political rights including the right to freedom of communication, association and movement, the right not to be subject to arbitrary or unjust detention and the right to a trial before a fair, impartial judge.

Then there’s the increased reliance by prosecutors on police “intelligence”. Prosecutors are often relying on “confidential” information, procured by police while undercover or from ongoing police operations, to prove the risk posed by an individual or a group. Defendants are being denied the opportunity to test the veracity and relevance of information used against them. An English law lord once described a similar regime as “the stuff of nightmares”. This alone is such an egregious breach of the right to a fair trial that it throws serious doubts on the preventative model.

Many of our state governments, it seems, share none of these doubts. Politicians continue to talk up the threat of organised crime and the effectiveness of the measures they are introducing to combat it, with apparent disregard for any hard evidence behind either claim.

Debate revs up on bikie laws

Thanx for this analysis of most depressing developments.

AS a biker myself it is with interest that I hear reports of ordinary law-abiding bikers in QLD being harassed by the local constabulary. When I say harassed I mean pulled up by cops to show papers and describe what they are doing, where they are going, and for what reason. This is happening to bikers who we would not class as 1%ers or members of criminal gangs. You don’t even to be wearing colours to be targeted and patted down. One of the social biker clubs with a national membership suggested that each member ring the local cops every time they hop on their bikes to give them their itinerary. The cops probably hate this law already but when they get 100s of phone calls a day informing them of supermarket trips or a jolly to the coast then maybe they might revolt and basically ignore enforcement. These new laws are for publicity only and will do nothing that could not have been done previously.

Does this mean that if Abbott and co keep ‘consorting’ with Andrew Bolt, Alan Jones, Ray Hadley et al, then they will become..well at least tarred with the same brush, if not worse.

Dr Appleby makes the common mistake of believing that bikies are misunderstood individuals who like to ride motorcycles. Per anecdotal evidence the Qld cops believe that all persons who ride bikes are criminals. Both parties are wrong.
Bikie gangs are criminals. Bikers, are guys who like to ride motorcycles, often in similar apparel to Bikies, but they are not criminals.The Qld police should recognise the difference.
Bikies fully exploit this confusion. They use the naivety of civil liberationists to continue their totally nefarious activities of drug manufacture and distribution, extortion and prostitution, in the knowledge that people they rate as stupid will defend their rights.

Mikeb – you, Pedantic, Balwyn and Gabrielle Appleby are right to point to the over-reach and the ham-fisted and unimaginative application of these laws for purposes not intended by many – probably most – of the parliamentarians who voted for them. However, there is a new development that has taken place since the early 90s. There has been a change in OMG membership profiles such that individuals who share characteristics with those most likely to commit jihadist-motivated terrorism and crimes are now over-represented in OMGs. 20 years on a much greater proportion of the proceeds from OMG crime is being used to fund Islamic militancy (in Syria for example). And this development blurs the distinction between prevention of terrorism and dealing with OMGs.
OMGs are not what they were 20 years ago. My guess is that our police and security services are focusing increasing attention on OMGs because many of the gangs are different in new and significant ways from the OMGs as still understood by the general public. Thousands of wholly innocent bikers are victims of the way the laws are applied, and used as cover for OMGs.