The Rudd years: highs and lows

He was prime minister twice, and rarely off the front pages since 2007. Crikey runs through Kevin Rudd's successes and failures. You be the judge of his performance ... 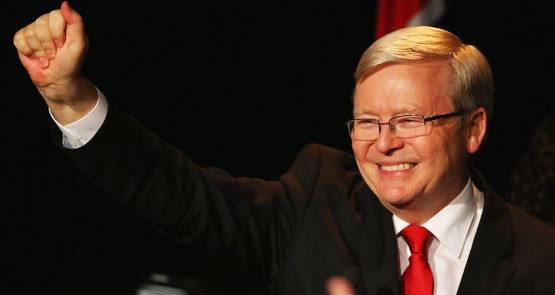 Kevin Rudd was elected to Parliament in 1998 and rose to the position of prime minister twice: in 2007 and again in 2013. Crikey reviews his highs and lows since becoming Labor leader in 2006.

Even Kevin Rudd’s fiercest critics praise his performance as opposition leader. The Howard government was already struggling in the polls by 2007, but Rudd proved a masterful campaigner and delivered the broad appeal needed to make Labor electable. He re-energised the Left with progressive policies on climate change, refugees and industrial relations; at the same time, many conservatives accepted the bookish churchgoer as “Howard lite”. Voters in the key state of Queensland flocked to him as a hometown boy made good; an early Facebook presence, coupled with appearances on FM radio and Rove Live, appealed to younger voters. Rudd achieved a two-party-preferred swing of 5.44% to Labor at the 2007 election and maintained a phenomenal approval rating — peaking at 71% in April 2008 — for the first two years of his prime ministership.

Rudd’s first act as prime minister was ratifying the Kyoto Protocol, a move that drew spontaneous applause on floor of Bali climate change conference. He later increased the renewable energy target to 20%.

On the first sitting day of Parliament in 2008, Rudd delivered what many regard as the pinnacle of his prime ministership: the apology to the Stolen Generations. Although lauded now, it was a controversial step at the time with some Liberal MPs boycotting the event and conservative commentators Alan Jones and Andrew Bolt fulminating against it. “Decency, human decency, universal human decency, demands that the nation now step forward to right an historical wrong,” Rudd told Parliament. “It is time to reconcile. It is time to recognise the injustices of the past. It is time to say sorry. It is time to move forward together.”

Rudd also abandoned the Howard government’s WorkChoices industrial relations laws, replacing them with a Fair Work Act which favoured workers and unions. He was proud of his decision to boost the aged pension by $30-a-week and lift funding for organ donation by $150 million.

In his specialty area of foreign affairs, Rudd is widely acknowledged as playing an important role in making the G20 leaders’ meeting the primary forum for tackling the GFC. This gave Australia a bigger say in global economic policy. Later, as foreign minister in the Gillard government, Rudd was one of the first ministers in the world to advocate a “no fly zone” in Libya. The zone was later implemented and contributed to the downfall of the Gaddafi regime. In his second incarnation as prime minister, Rudd signed an offshore processing deal with Papua New Guinea that has helped slow the arrival of asylum seeker boats.

Labor came to power in 2007 promising to improve Australians’ cost of living, but the populist Fuel Watch and GroceryChoice schemes both fell over within a year. And while the government’s economic stimulus programs saved jobs, they were beset by implementation problems. The home insulation scheme saw shonky operators with little or no training flood the market; four young installers died working on the program, which was later withdrawn. Media reports also highlighted examples of waste in the Building the Education Revolution “school halls” program.

Despite describing climate change as the “greatest moral, economic and environmental challenge” of our time, Rudd walked away from plans to introduce an emissions trading scheme in April 2010. Australia would now wait on the world to act before introducing an ETS. This decision saw Rudd’s popularity nose-dive, as voters questioned his conviction.

In 2008, Labor dismantled the Howard government’s “Pacific Solution” on asylum seekers: offshore processing, temporary protection visas and boat turnbacks were all ditched. These moves were praised by asylum seeker advocates, but critics argued the changes contributed to a rising number of asylum seekers attempting to reach Australia by boat — some of whom drowned. The number of asylum seekers arriving by boat increased from 148 in 2007 to 6555 in 2010, at a cost of billions to the Australian budget. Labor later abandoned its opposition to offshore processing.

In May 2010, following the Henry Tax Review, Labor announced a plan to implement a Resources Super Profits Tax: a 40% tax on high mining profits. Although polls later showed the idea of such a mining tax was popular with voters, Labor’s plan became a political nightmare when the resources industry mounted a lavish advertising campaign against it. Labor figures later acknowledged the scheme had been rushed through without enough consultation with industry, or enough time to explain the package to voters. Julia Gillard later watered it down to a Minerals Resources Rent Tax, which earns far less revenue.

These policy blunders, Labor’s declining popularity in the polls, and frustration at his increasingly haphazard leadership style led Rudd’s Labor colleagues to remove him as leader in June 2010.

Most Labor figures agree that Rudd’s return as prime minister saved seats at this year’s September 7 election, but there was alarm at rushed policies put forward during the campaign. These included a vague plan for special tax concessions for the Northern Territory and a proposal to move Australia’s navy base from Sydney to Queensland.

Small nit. Typo alert. It was 2007 not 2010 when Rudd scored the big swing.
Large nit. Insulating 1 million houses was not a failure,
despite what the dinosaurs might say. (See Possum Comitatus for details.)

Pink Batts scheme a As even reprts on Crikey show this scheme was succesful…..Just a very succesful propaganda campaign was waged..Why perpetuate this myth

Same goes for the BER ……Audit report was good although in NSW there was a slightly higher incidence of rorting………The failure was the media to allow a disinformation campaign to run so well.I’d expect perpetuation of these myths to come from failed news media such as News Ltd but I would prefer it if Crikey correspondents were not so blinded

This report fails to mention that Rudd announced on election night 2007 that he would select his ministry (and to hell with the factions). He announced this for non-Labor voters thinking they needed something more than the usual sop of “I will govern for all Australians”. I think this was the moment, within the first hour of his prime ministership, that the Labor Party turned on its leader. For some, this would have been a ‘high’ point but in terms of Rudd’s future it was the main thing that brought him undone. It was totally unnecessary to tell the whole world when no one outside the Caucus, apart from the ‘faceless men’, would ever be able to defend him from the seemingly obvious retaliation that was inevitable, given that this is the ALP we are talking about. The Party hasn’t learned anything of course. The factional vendetta against Rudd, entirely predictable in that party, was so overwhelming in its vengeance that it took out Gillard too, as mere collateral damage. The ALP is to blame for the political stupidity of the past six (or is that ten?) years. Just ask Mark Latham.

I am a fierce critic of Kevin Heiner Rudd, maybe not identified as among the fiercest. I certainly do not praise his performance as two time Labor leader. I also question again why he is not being pursued by so called Main Stream Media you would be among them Matthew, for answers about his time as Chief of Staff for Wayne Goss during the destruction of important documents, which is now known internationally as the Heiner Affair and an on going issue! The last big thing Kevin Heiner Rudd did was misled his trusting Griffith constituents. In my opinion Rudd remains together with Gillard as a pair of mismatched Labor Party bookends. Between them they and the Labor Party team players continue to support so much which is wrong with the national Labor Party team. Just for clarity I am not impressed with either of the two parties not much preferred! Perhaps their supporters should have a good look at themselves in the mirror? Edward James