Clive Palmer has chosen to not vote on matters that could be perceived as being in his interest. But ACIL Allen governance expert Stephen Bartos points out it is not the man himself who matters,but his senators, who hold the real power. 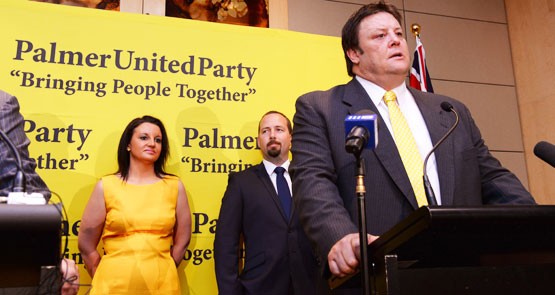 Newly elected member for Fairfax Clive Palmer made his first day in Parliament memorable, not through his vote but by not voting, at least eight times.  Most notably, he did not vote for repeal of the carbon tax. This, he claimed, was in no way due to a conflict of interest. As one of politics’ most famous quotes says, “he would, wouldn’t he”.

But Palmer’s own vote will not affect outcomes in any case. One vote, except when there is a hung parliament, makes no difference in the House of Representatives.

By contrast, the Palmer United Party senators will potentially have much more power, especially now Victorian Senator-elect from the Motoring Enthusiast Party, Ricky Muir, has pledged his support for the Palmer United Party. There are two certain PUP senators — Glenn Lazarus from Queensland and Jacqui Lambie from Tasmania — and potentially a third from Western Australia (Zhenya/Dio Wang), depending on what the High Court decides to do with the Senate election in WA. That is a bloc of three or four senators, enough to make a real difference to the outcome of Senate votes.

They owe their positions to Palmer, although he maintains they are individuals, saying: “each individual has to look into his own heart and say, ‘do I think I have conflict?’ … and if you do think you have a conflict you should do the right thing.”

Technically, Palmer is correct. The conflict-of-interest rules are about individual pecuniary interests, not parties. The House of Representatives Practice (2012) says:

“Standing order 134(a) states that a Member may not vote in a division on a question about a matter, other than public policy, in which he or she has a particular direct pecuniary interest. Public policy can be defined as government policy, not identifying any particular person individually and immediately.”

It notes that under this definition expulsion of a member of parliament for conflict of interest is highly unlikely, because almost everything that is debated is public policy. In other words, Palmer under the rule could vote on any tax bill (for example) unless it proposed a tax penalty or tax concession for Clive Palmer by name, or applied solely to a company he owned and no other company. The chance of that is minimal. Similarly, he would be able to vote on any spending or regulation bill provided it did not immediately identify him or his companies.

But even in the case of legislation that would directly affect Palmer’s interests, his senators would not be bound by the same rules. The PUP senators don’t own mining and energy companies, even though their party founder does, and they will be free to vote how they want. Our parliamentary rules never envisaged a situation where a wealthy individual would use that wealth to create a party in his own name and propel others into the Senate. As observed in Crikey previously we have to look back to the history of the British Parliament, decades prior to Australian Federation, to find any precedents.

When the new Senate commences from July 1 next year, PUP senators will face a hard choice: they could take the position that a conflict arises only if it affects their own personal pecuniary interests, or they could be guided by Palmer’s register of interests and take that into account. It will depend on how much public and media pressure they feel under to take the broader community view of conflict of interest.

We should also not discount the possibility that over time the influence Clive Palmer wields over “his” senators will diminish. When they arrive in the Senate they will be surrounded by people who will tell them that they were elected not due to the PUP vote but because of their own sporting talent, popularity, unique understanding of the people of Tasmania/Queensland/WA, intelligence, wisdom, insights, or whatever else might appeal to the senator in question.

Senator Mal Colston, for example, decided to leave the Labor Party and sit as an independent after the Howard government plied him with just such flattery. If the same applies with PUP senators, they might be camp-drafted out of the party and turned to other causes.

If that does not happen, though, the decisions of the PUP in the Senate have enormous potential to involve conflict of interest: arising not from the formal rules but from public perception.

It was not “one of politic’s most famous quotes” as inaccurately paraphrased above.
It was during a criminal trial, procuring, when Mandy Rice-Davies said, in reply to some tory hypocrite’s barrister putting it to her (sic!) that he denied that he’d even met her, “well, he would say that, wouldn’t he?”.

hi AR – suggest you check your sources (even Wikipedia gets this one right). The phrase you reproduce is a common mistake. As you point out, the quote (which is direct from the transcript) comes from evidence given by Mandy Rice-Davies in the court case arising from the Profumo affair. It is regarded as a political quote because it was a political case, and was said about a politician. I was in London at the time, can assure you it was a very political context in which the quote gained currency.