Kevin Rudd dropped his bombshell in Parliament at 8.30pm last night. Our reporter was in a bar nearby when the text messages landed -- signalling the end for one of our more enigmatic and controversial pollies. This is how the day unfolded. 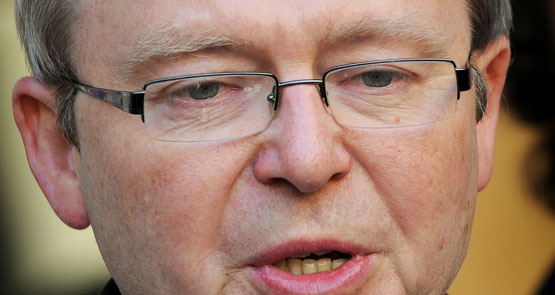 It was a very odd first day of Parliament yesterday, capped off by a bombshell announcement by one of the country’s most unusual politicians, Kevin Rudd.

Only a few people, chief among them Anthony Albanese, knew of Rudd’s intentions. Albo had arranged a dinner with a few of Rudd’s closest associates without telling them the reason. Even Opposition Leader Bill Shorten, the alleged architect of Rudd’s demise in 2010, was only given 10 minutes’ notice of the former PM’s resignation speech.

Wednesday nights of sitting weeks are the traditional pub night for politicos, and by 8.30pm, as Rudd rose to his feet to make his emotional speech, the press gallery was almost empty.

Down in the sitting-week night spots of Kingston and Manuka, the bars and restaurants were packed with journalists and staffers when the first text messages landed. At the popular Kennedy Room, as a few Billi Billi shirazes were going down, mobile phones started flashing like strobe lights: Rudd has gone!

The bar flies followed it on Twitter. After the announcement, the member for Griffith, who had spent the day at the back of the chamber, tapping away on his iPad, went off to an Indian restaurant in Manuka. He was joined by Albo, Chris Bowen, Joel Fitzgibbon and Sam Dastyari. By 11pm, most of the Laborites had retreated to the delights of the Public Bar, to rehash a political career like no other.

The key to Rudd, of course, has always been his rampant narcissism. After the last election, the Australian Financial Review’s Pam Williams published a story revealing that the Coalition had commissioned a psychiatric evaluation of Rudd, diagnosing him as a “grandiose narcissist”.

People of that ilk take all the glory for their successes, while failure is the fault of others.

Last night Rudd, like his demeanour on election night, showed no indication that he had actually led the party to an election defeat. He said that he was able to “save the furniture, and in fact do considerably better than that.” However, his skin is clearly paper-thin.

“Recent statements since the September election have been particularly hurtful, ” he said, and the “slings and arrows of outrageous fortune” have hit home. It’s a good quote, because in Hamlet, the mad Prince of Denmark spent his adult life seeking revenge on all the people around him for real and imagined wrongs.

“Last night Rudd, like his demeanour on election night, showed no indication that he had actually led the party to an election defeat … his skin is clearly paper-thin.”

For those of us who don’t normally work at Parliament House, stepping through the front door is a little like falling down a rabbit hole. Wednesday was the first real sitting day of the Abbott government. For the first 90 minutes, there was an idiotic argument about name-calling, with the newly-minted PM calling Shorten “Electricity Bill” and the Greens referring to Abbott as “Typhoon Tony.”

It was like reading Alice Through the Looking Glass, where Humpty Dumpty says that “when I choose a word it means just what I choose it to mean, neither more nor less”.

As the 44th Parliament of Australia resumed, it was as if two groups of feral dogs had been let loose in the chamber, with Christopher Pyne and Tony Burke leading the attack. Abbott had already said the first order of business would be introducing a bill to repeal the carbon tax, a move guaranteed to get everyone off on the wrong foot.

Abbott already knows that he won’t be able to get it through the Senate till July, so what was the point? Is he so ideologically driven about climate change that he is going to force the country to a double dissolution?

Labor had clearly learned much during the three years of the last Parliament, and had taken a leaf out of Abbott’s book in trying to suspend normal parliamentary process. It soon descended into an all-out brawl, loosely monitored by the new Speaker, Bronwyn Bishop, who showed herself to be more partisan than her predecessors, clearly favouring the Coalition.

Several times when Labor’s Tanya Plibersek and Burke raised a point of order, seeking to point out an inaccuracy in something the government had said, they were overruled by Bronny.

The ALP was very vocal while the PM was speaking, constantly shouting and heckling him. But we all know that governments are capable of passing legislation — even the last, hung Parliament managed to pass almost 600 pieces. So why do we have this absurd theatre? The whole point of debating is to persuade the audience of your point of view. Listening from the press gallery, I was amazed at how brutal it was, and how little it achieved.

Finally, Tony Burke said, despairingly, “where is the idea of the adults being in charge of this government?”

With a birds-eye view of the action, I was thrilled to see that the new Liberal member for Lindsay, Fiona “Sex Appeal” Scott, had brought her favourite pair of shoes from Penrith, some very white high-heeled pumps. Many of the Liberal ladies sported the all-purpose conservative hairdo, the blonde-streaked shoulder-length bob — as for the men, the less said about their hair, the better.

The most famous new member of the house, Clive Palmer, was quiet as a mouse, but that was because he had already conducted his favourite activity, a press conference, in the courtyard. Why bother debating 149 other people when you can harangue 20 journalists, personally referring to the beleaguered representative of The Australian as “Rupert”?

Palmer’s press conference was followed by one conducted by crossbenchers Bob Katter, Adam Bandt, Andrew Wilkie and Indi’s Cathy McGowan. Poor Katter, stripped of his ability to make or break governments, is no longer the drawcard he once was, so attendance was rather thin.

Rudd ended his speech last night by saying that he had looked back at his first speech in 1998: “You will be pleased to know that none of us have changed one bit in the years since then.”

In a sense that is true. Rudd entered Parliament without a faction or a support base — always, inexplicably, much more popular with the general public than with his own side. That didn’t change, even when he became prime minister.

Soon after that, the woman who replaced him, and who he later replaced (and someone with whom there may just be some lingering and reciprocal malice) Julia Gillard, had her say. “Best wishes to Kevin, Therese and their family as they embark on the next stage of their lives,” she tweeted.

* Crikey reporter Margot Saville has ventured to Canberra for the first sitting week of the Abbott government. Bernard Keane is on leave.

When all is said and done, Kevin was undone, not by his personality, nor his policies, but by the arch psychopath Tony the attack dog Abbott. How else can it be explained how Kevin, being the most popular Prime Minister that Australia has ever had, just before Abbott became opposition leader, to languishing in the polls only a few months later. It started with the “Kevin O Lemon ” campaign and only got nastier from that point on.

As for Kevin leaking to the media, don’t forget who the master phone hacker is and where the stories were published!

It’s a shame none of the media report on the gall bladder operation and heart valve operation Rudd had in 2010 after he was replaced.

You’d think that might just be relevant to work performance, including demeanour.

How is it these critical factors are omitted while a Coalition smear is reported via a mate in the AFR?

I put the same question generally to David Marr at a Glee Books book launch some years back regarding fairness and he just waffled. And this article is not much better really.

How is it indeed that media types airbrush the sincere malice of Murdoch tabloids so soon? Cowardice?

This looks quite relevant to me – http://larvatusprodeo.net/archives/2010/07/on-kevin-rudd-and-gallbladder-operations/

As does this brief coverage of “emergency surgery” – http://www.perthnow.com.au/news/former-prime-minister-kevin-rudd-to-surgery-after-abdominal-pains/story-e6frg12c-1225899106314

You’d think Mark Latham would get it too.

Another reason for fewer journos attending Katter’s press conferences is the fact that, in the wake of Palmer, he no longer seems quite so colourful.

When all is said and done KR was very good at ideas but pretty poor at leading a team to deliver them. It will soon be all forgotten, now that the rightful heirs of power are back in control, will fix things up, clean out all the cupboards that KR and JG stuffed full of problems. Perhaps some time in the distant future Australia might again experiment with a Labor leader.
Rubio is right, though, the Murdoch Press was pretty relentless in bringing him down.