Bye bye Kevin Rudd: how the day unfolded in Canberra, his successes and failures, and who will win Griffith? Plus we crunch some numbers on Direct Action and take a look at James Packer's sudden interest in the arts. We bring you Campbell Newman: bikie's pal. And finally, should restaurants be allowed to seat ugly people at the back?

You might think we’d write today’s editorial on Kevin Rudd quitting politics. After all, we’re unashamed political junkies. You probably are too.

But we’d like to start this edition on another topic, one that has largely faded from sight due to the Rudd drama.

Peris’ speech is a historic and moving moment in Australian history. It represents a significant step towards better representation for Aboriginal Australians. This moment is long overdue, and it deserves to be celebrated.

So here are some excerpts of Peris’ speech (the full speech is here), and there’s a video link, too. It might be the most important thing you watch today — and that includes anything to do with Kevin Rudd.

“Accolades, achievements and celebrations have been a part of my life. But in my heart, I know that part of my life is virtually meaningless compared to the ability to survive shown by my grandparents and my mother. I cannot even imagine or comprehend how it would have felt to live life during those days. These stories are part of the truth of Australia’s history. It is what it is. The past is the past, and no matter how hard we try we cannot change that history. But let’s start to undo the wrongs with what is right and just …”

“I say this to all of my indigenous brothers and sisters, and to all people — within every one of us, lies the ability to reach deep inside ourselves and draw upon our inherited strength that our ancestors have given us. There lies a spirit that needs to be awakened.” 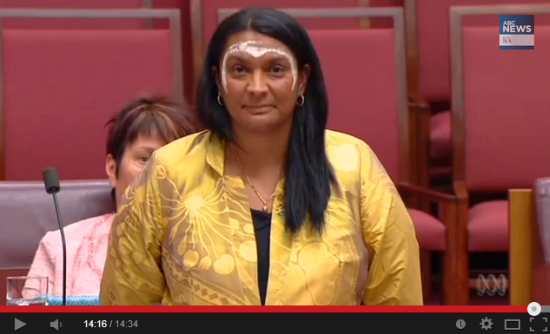 Well done Crikey. You picked the most important speech by far.
(Also the most moving one.)

Thank you for leading with this speech.

I’d rather read the Micronesian phone book than another word about Krudd. Good riddance – why did he do the right thing 3 years ago? Oh, right coz he is an egotistical, self absorbed, narcissist without a shred of decency, empathy or belief in anything except his own exceptionalism.
Rot in Hell, asap.

AR, I wonder if you voted Labor? Did you vote for Rudd over Howard back then? Were you happy that Labor dumped (on) him in 2010? Or have you been a Coalition voter all along?

No doubt Trish Crossin feels aggrieved that Nova Peris has taken her place. However, Ms Crossin’s forced sacrifice has addressed an inequity in representation that Ms Gillard recognised and redressed.
Ms Crossin would be better served by history if she recognises that fact and then her achievements will also acknowledged, as one who was substantial enough to be give up an important role, not those of a spoiler.