When beauty mags get ugly. Interesting tip from a fashion insider:

“Beauty editors are being paid in vouchers and gifts to mention certain products in their magazines. It’s a HUGE scam and those smaller clients don’t get a look-in! Someone should investigate the beauty editors.”

We’ve asked around and yes, beauty editors have for years been sent free product. The premise is they test and review it legitimately, but the issue over the years was that coverage favoured paid advertisers so the little companies didn’t get a look in. But our insiders reckoned there are bigger problems around the ethics, influence of advertisers and non-disclosed sponsorship in the beauty/fashion media. Firstly, publishers of women’s magazines sometimes put pressure on staff to write about advertisers. Secondly, some staff get flown to exotic destinations and pampered in return for favourable coverage. These free trips are often not declared to readers. Apparently this has been happening for years. Readers, of course, are the last to know they’re reading advertising disguised as a story …

Crikey has been delving into the fashion world of late. If you’ve got any tips, let us know.

T-shirt statement. Speaking of matters sartorial, we received this sighting:

“Spotted on ordinary commuter at Central Station, Sydney: A ‘MINORITY GOVERNMENT IS DICTATORSHIP’ T-shirt. An overdue critique of Cameron-Clegg, I believe.”

Is our reader teasing? Seems more likely to be a reference to the previous Labor/Green/independent minority arrangement.

Oz rails against journalists who tweet. Interesting editorial in The Australian today taking aim at journalists who tweet, aka “activist reporters … and narcissistic tweeters”. The theme is that the practice of journos tweeting — and the sinners are all at Fairfax, apparently — is juvenile and dangerous to reporting.

Which is very interesting, but perhaps the Oz needs to warn its own reporters that they are on “a path to ruin”? 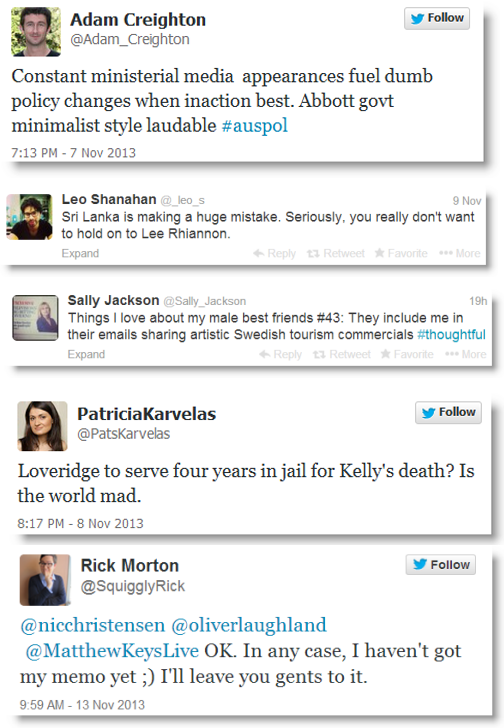 We don’t want these reporters to stop tweeting — Twitter allows journalists to better interact with the public, to share and harvest ideas. Sure, there’s rubbish on Twitter, but it’s a wonderful, messy conversation anyone can be a part of. Crikey’s reporters tweet, and we’re delighted they do. The Australian’s leader-writer should lighten up.

CPR fail. Today is not a good day for a heart attack in central Melbourne, folks.

“Due to today’s inclement weather the free cardio-pulmonary resuscitation clinic which was to be held in the Bourke Street Mall from 11am has been postponed. The clinic will be rescheduled at a date to be advised.”

The day the music died. Several readers have alerted us to this Facebook post doing the rounds, so we’ve looked into it for you:

“AND IT BEGINS! I hate to say I told you so … and for anyone who voted for Newman and the LNP, you should be ashamed of yourself. The new Qld non-association laws (bikie laws) were used to disperse drumming circles at Stradbroke Island beach after the Island Vibe music festival! People approaching the circles were told by police that they would face arrest if they congregated in groups of more than 20 … I was at Island Vibe and the after parties on the beach were shut down by police … Not drunken riots by any means, just peaceful people gathering to celebrate life with music on a beach out of earshot of Straddie residents.”

We put this to Queensland Police — don’t jail us, we’re not bikies, honest! — and received this response:

“On Saturday October 26, North Stradbroke Island police issued a noise abatement direction to a person playing amplified music from a van on Home Beach. Police also spoke to a group of people and asked them to move on after a request from a Stradbroke Island camping company. At no time during the interaction were powers under the Vicious Lawless Association Disestablishment Act or the Criminal Organisation Act used, nor was it implied they would be used.”

You can check out the legislation here. So it seems that no, police didn’t use the bikie laws to kill the beats. And having heard some drumming circles over the years, we do have some sympathy for the cops on this one …

Youthful Greens identity. Crikey enjoys a good auction of pollie memorabilia, and Bob Brown’s latest fire sale is no disappointment. We enjoyed this pic for sale of Brown on the election trail with Greens candidates in 1996. That’s a very fresh-faced Ben Oquist on the left — he must be in his early 20s. Oquist went on to be Bob’s right-hand man in Federal Parliament (and Christine Milne’s, for a while — he left in interesting circumstances after the recent election). If you know who the two women are, let us know. 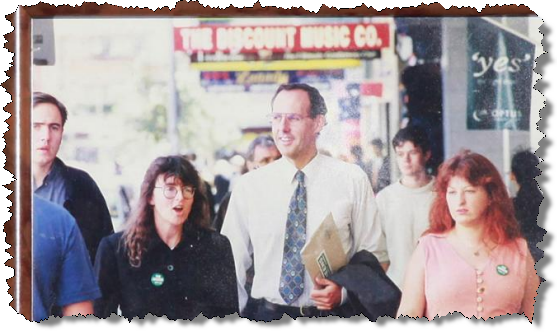 You can also pick up an empty wine bottle, a commemorative Franklin River plate from 1982, and some Gunns number plates (check out the auction items here. Proceeds go to the Tasmanian Greens and the Bob Brown Foundation). Crikey loves photos of pollies from days of yore, so if you find any in those old photo albums, send them in. Extra points for mullets (Greg Barber, this means you).

The hard one to guess will be the guy immediately to the right!

The guy immediately to the right a young Dirk (surname ?) who was active in the Wilderness Action Group of Sydney TWS in the 90ies. Or possibly Peter “Rusty” Kipatrick with hair dyed black (?) as you do.

As for the lady on the right, I would guess a Greens candiate from maybe Kiama, or Berry, even possibly Queanbeyan.

the woman on the right maybe Victoria Kearney who was a Federal election candidate in 1996, or another of the women listed here for the Greens http://en.wikipedia.org/wiki/Candidates_of_the_Australian_federal_election,_1996#New_South_Wales

“Yes is me and so happy to have bought at auction held yesterday. .Ian Mc sent me the alert”