The Australian doing hard time overseas (no, it’s not Schapelle)

Jock Palfreeman says he acted in self-defence when he took a life. Bulgarian courts say otherwise. Now Palfreeman alleges he was assaulted by prison guards -- so why isn't the media interested? Freelance writer Andy Fleming investigates. 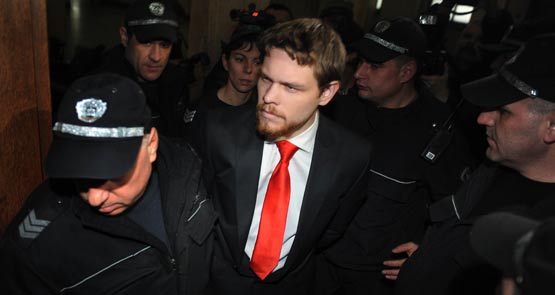 Jock Palfreeman (pictured), a 26-year-old Australian serving a 20-year sentence for murder in Sofia Central Prison, Bulgaria, is not a household name in Australia. He should be. Now about to enter the seventh year of his incarceration, Palfreeman has in the last two years established a prisoners’ union, the first of its kind in Bulgaria, and been engaged in a constant effort to maintain the legal rights to which he believes he and other prisoners are entitled.

According to the Bulgarian courts, Palfreeman attacked Andrei Monov in an unprovoked fashion and murdered him in December 2007. Palfreeman claims to have acted in self-defence, intervening when he encountered Monov and a group of his friends assaulting two Roma.

Palfreeman’s organising efforts have not endeared him to prison authorities, and on October 17, Palfreeman alleges that he was one of a group of 11 foreign prisoners subject to a serious assault by prison guards. The assault, he says, followed a simple misunderstanding by one guard during morning roll call (8.30am), in which the guard — Palfreeman suggests deliberately — failed to notice his presence. According to Palfreeman, at about 8.50am:

“The guards took all of us into the corridor and started viciously beating all of us. They used their boots, batons and also punches with their fists, they also took us by the hair and rammed our heads against the wall, myself included. They lined us up against the wall and about 50 guards started beating everyone from behind. We were 3 Iranians, 6 Iraqis, 1 Sudanese and myself …

“During the attack I was shouting, ‘this is a crime’ and other prisoners were shouting ‘Why?’, because they did not speak Bulgarian, all they could say was ‘Why?’.”

Following this alleged group assault, Palfreeman wrote that he was personally subjected to another beating by the same guard present at morning roll call, and that:

“After this individual guard had finished beating me the commanding officer started threatening us, he said ‘I don’t care about the human rights organisations, I don’t care about your embassies, this is Bulgaria and we will beat you when we want’ … “

Palfreeman’s account of the assault has received no mainstream media attention to date, and since the publication of his open letter on October 29, I’ve received no further word from Palfreeman as to his condition, that of the other prisoners allegedly assaulted, or any news of any formal investigation into his claims by either Bulgarian or Australian authorities. This is especially concerning given that, on the day of the assault, Palfreeman stated: “I called a lawyer, the Bulgarian Helsinki Committee and the Australian consulate”. Later that day Palfreeman was “allowed visits from the Bulgarian Helsinki Committee, a lawyer and the Honorary Consul of Australia,” and wrote that:

“An ‘investigation’ was carried out and concluded by the prison administration but has yet to be revealed, the Bulgarian Helsinki Committee have conducted their own investigation as well as the Ombudsman’s office of Bulgaria [and] the matter has been referred to the regional prosecutor’s office …”

While Palfreeman’s case generated some early press, he is no Schapelle Corby. This is despite the fact that a small campaign seeking first a retrial and now an appeal to allow Palfreeman to serve the remainder of his sentence in Australia has been developing, most recently in the form of a public meeting in Melbourne at which journalist Belinda Hawkins, lawyer Julian Burnside QC and actor William McInnes spoke.

However, it seems unlikely the move will succeed. The victim’s father is a Bulgarian Socialist Party MP and has previously vowed Palfreeman will spend the rest of his life in Sofia Central prison. But increased attention on conditions inside the jail, and events such as Palfreeman’s alleged beating, must surely begin to reinforce claims that his own rights would be secured by the Australian government if it could arrange a transfer.

In the meantime, Palfreeman may choose to continue his campaign on behalf of the Bulgarian Prisoners’ Rehabilitation Association, demanding that the prison officials responsible for the alleged assault be sanctioned. He’s indicated that failing this outcome, he’d call for “the resignation of the Director Peter Krestev, so that law might prevail within Bulgarian prisons”.

*Andy Fleming has been following and blogging about Jock Palfreeman’s case since his arrest in December 2007. He has been in semi-regular correspondence for several years but has never met Palfreeman. Their only contact has been a result of and subsequent to Palfreeman’s arrest, trial, conviction, sentencing and imprisonment.

This case is a distressing one to read about let alone having to live through as Jock and his family, particularly his poor father have to do. Thank you Andy for keeping the matter in the public domain albeit to a limited extent. I would be pleased to know of any practical means of support that might be available.

Oh I see, thanks Alex.

Where is DFAT in all this? Keeping the minister briefed and nothing more?