iSentia index: the Coalition settles in

Tony Abbott bounces back to a more prime ministerial lead in the media mentions numbers this week, up 50% from last week's hide and seek effort.

Tony Abbott bounces back to a more prime ministerial lead in the numbers this week, up 50% from last week’s hide and seek effort. Nevertheless a lot of the coverage was about what the Government is trying not to talk about, with number two and three on the list, Scott Morrison and Julie Bishop, having a hot week trying to fend off discussion about the deteriorating relationship with Indonesia following spying claims and the failure to turn around a number of asylum seeker boats.

Bronwyn Bishop leapt up the list as she finally achieved the Speaker’s chair she has coveted for quite a few years, promising to be totally impartial, which the ALP found hard to believe. You can guess she probably won’t be ringing up Peter Slipper to ask him for tips.

Kevin Rudd wasn’t out of the list for long, but most of his coverage was retrospective discussion about the election campaign, while Chrises Bowen and Pyne bounced back — Bowen thanks to a bit of showmanship over the debt ceiling and Pyne mainly as Leader of the House with Parliament resuming, but also announcing some Gonski giveaways. And Warren Truss made a rare appearance in the list, trying to put some heat on Joe Hockey not to sell GrainCorp, but Joe won’t be bullied by “anyone, meaning anyone”, according to Joe. 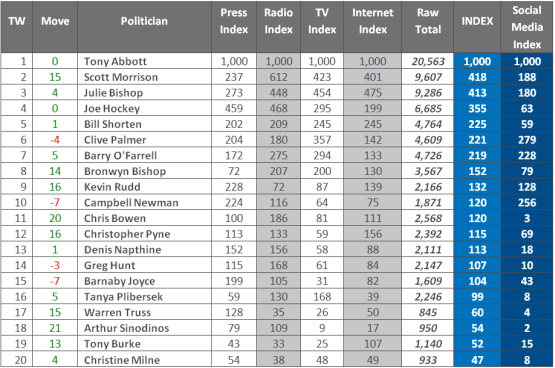 Talkback numbers bounced back strongly as well, but basically the same list as last week. Interesting to note that Scott Morrison didn’t make the list and Chris Bowen and Greg Hunt got no mentions at all. Generally asylum seekers, taxes and climate change are the three favourite topics on talkback … but perhaps callers aren’t so keen now that the Coalition is the Government?

Scott Morrison may not have registered much on talkback but he was copping a fair hiding on the far more left-leaning microblogs, as was his boss — but that’s nothing new.

Slater is the latest sports star to be involved in a nightclub “incident”, but this time he’s being defended pretty stoutly by teammates and no word of recrimination from the administrators.