Pssst, want to buy a drug house? ... lanyard intrigue as Parliament sits ... ABC rethinking how it buys and makes content? ...

Putting the “real” in real estate. Tips loves this ad on realestate.com.au for a house in South Australia that would be ideal for … well, growing or manufacturing drugs. 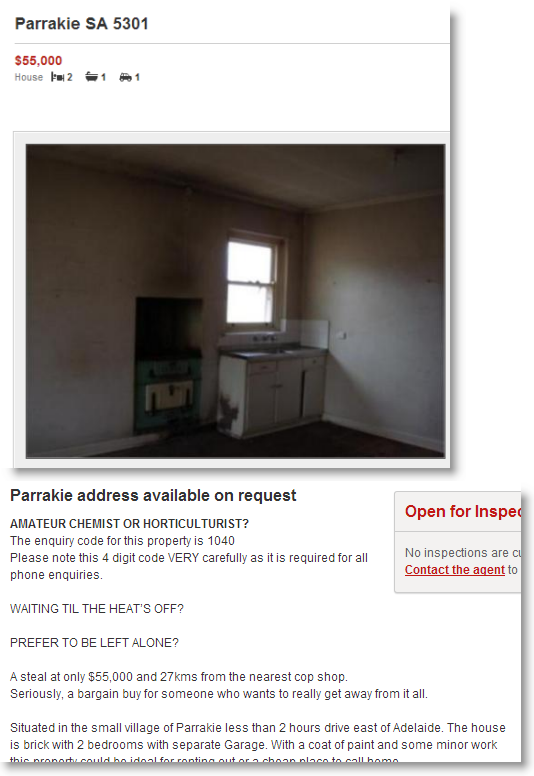 How long ’til some wowser tones down this ad? Crikey likes it the way it is — an inspiring example of entrepreneurial marketing. If you spy any interesting ads, let Tips know.

Lanyard revolution. Canberra is the place to be today as the 44th Parliament sits for the first time — and we hear big change is happening at Parliament House. The old-school lanyards (the necklaces doled out to put around your neck and hold your parliamentary pass, which you need to navigate Parliament’s back corridors) were black. Now we hear they have now gone rainbow: green for departmental, yellow for media, “a lovely patterned blue” for parliamentary staff, and we’re not sure what orange is for (lobbyists?).

Is this all about alerting wet-behind-the-ears backbenchers to whom they may be speaking? (You don’t want to get Phil Coorey confused with the bloke who delivers the printer cartridges and spill all your secrets.) Perhaps we should ditch the conspiracy theory — some reckon it’s because there’s an international roll-out of colour-coded lanyards. Meantime, Ms Tips has a One Direction lanyard in the drawer for when it’s needed in the Crikey bunker.

Tweeting up a storm. Speaking of Parliament, MPs of all persuasions are hitting up social media today. Coalition MPs seem to be feeling more chipper than Labor’s Tony Burke … 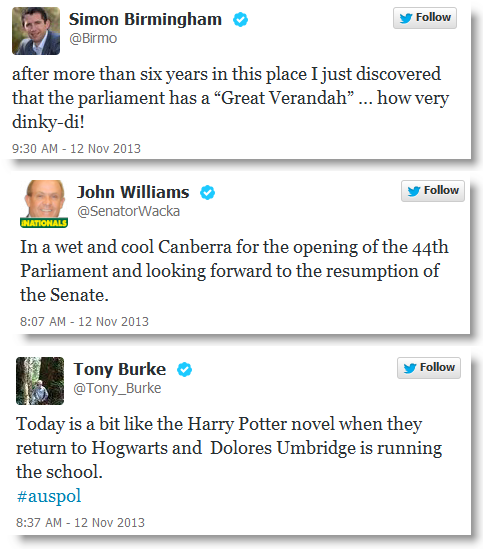 … while giant-killing independent Cathy McGowan had a tea with Clive (the pair will sit next to each other in the chamber): 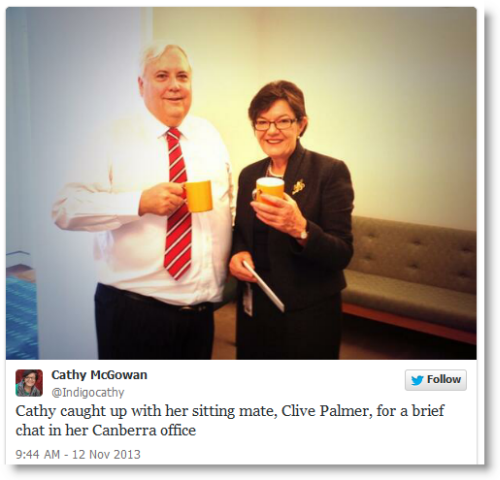 Guess who, don’t sue. There was a lovely and inspiring tale of an Australian businessperson who forged a successful career at a fairly young age in the media lately. Just one little problem. A mole told us “we did a lot of work for this individual. They chose not to pay their bills. I wonder if we contributed to their success.” Funnily enough, “don’t pay your bills” was not listed as this person’s key to success in the article …

Revamp of ABC content? Is there a bigger plan to reorganise the structure of ABC TV? Yesterday we reported a tip that ABC TV’s newish director, Richard Finlayson, was frustrated by the resignation of Jennifer Collins (she left for a job at a private sector production house, Screentime). Finlayson seems to have been about to offer her a gig as head of content. Seeing there are three heads of content (factual, fiction and indigenous), a promotion looked a bit light-on if it was one of those. But there’s talk he was creating an overarching head of content for all of ABC TV, like the broadcaster tried a few years ago with Courtney Gibson, who was hit by The Make A Wish furore at The Chaser.

But there’s talk coming from the private sector that Finlayson and his boss, Mark Scott, might have something even bigger in mind — the revamping of the way the ABC buys and makes content. That would involve moving away from the strong outsourcing approach former ABC TV director Kim Dalton took. Stand by, as they say in telly — the news could be revealed at the ABC’s 2014 launch in Sydney on November 26.

Bolt’s blog. Is anyone moderating Andrew Bolt’s blog? If so, did it not concern the moderator that a commentator calls a Greens Senator a jihadist and suicide bomber? We read this rubbish so you don’t have to …

And they’re racing. The problem with horse-racing types is they just can’t go slow. There was talk on 3AW this morning that a strapper who came from overseas for the Melbourne Cup was put in up a flat and provided with a car — and racked up $10,000 in speeding fines. Who will pay?

Bolt’s blog. – We read this rubbish so you don’t have to …
Thank you. Thank you very much!!