Defamation lawyer Clive Evatt has media editors trembling in their boots, and he's not afraid to embark on multi-year cases that end up in the High Court. But is he a friend to the battler, or just a provocateur? 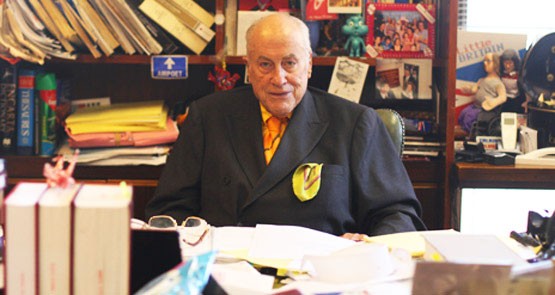 Clive Evatt is a taxi driver: flag him down, and he’ll take you where you want to go. This 82-year-old defamation lawyer has become legendary for representing the clients other lawyers won’t go near — and squeezing millions of dollars out of the media on their behalf.

Past clients include a serial tax dodger, a disgraced bookmaker, a former terrorism suspect, an accused war criminal and Gypsy Fire, a dancer wrongly portrayed as Bob Dylan’s sex slave. He took on shopping giant Westfield after security guards harassed a shopper over the length of her miniskirt. When a Gold Coast Bulletin crossword clue described nightclub owner Abe Saffron as a “Sydney underworld figure, nicknamed Mr Sin”, Evatt took the paper to court and won.

“His impact is unbelievable — he has kept the defamation industry alive in New South Wales,” legal affairs commentator Richard Ackland said. “He’s never to be underestimated. Even defendant lawyers would say they love Clive because he keeps them in business.”

Evatt is currently leading a $10 million defamation action on behalf of Stephen Dank, the controversial sports scientist at the centre of the Essendon Bombers and Cronulla Sharks peptides scandals. He’s also representing twice-jailed Holocaust revisionist Fredrick Toben against both The Australian and Greens leader Christine Milne over an article accusing him of encouraging anti-Semitism and fabricating history.

The Toben case was troubling Evatt the day Crikey visited him in his Sydney CBD chambers. The previous weekend, four Jewish men and a woman had been hospitalised with concussion, fractured cheekbones and bruises after being allegedly attacked and verbally abused while walking home from a Bondi synagogue.

“I’d hate to think appearing for him could in any way lead to physical violence,” Evatt said. Yet he is forging ahead with the case. It’s a question of freedom of speech — and anyway, he estimates Toben has a 75% chance of victory. That’s what matters, not whether he shares Toben’s views on the Holocaust.

“I don’t know whether a lawyer believes in anything,” he said.

Evatt’s office is a glorious tip, a living canvas and an OH&S nightmare. If Margaret Olley had taken up law rather than painting, this is what her chambers would have looked like. There are six fixed-line phones within arm’s reach, only one of which appears operational. A portrait of Lenin hangs on the back of the door; a set of Little Britain dolls leers on a table behind his desk. You can barely move between the walking canes and plastic tubs stuffed with legal texts. In the middle of the jumble is Evatt himself: bald, frail and stylish in a yellow shirt and orange tie.

And is that really a photo of a naked woman, her breasts obscured by a bag of golf clubs? Closer inspection reveals it is a charity calendar:”Top Shots: Women of Professional Golf”. It’s a memento from a 2008 case Evatt fought for golfer Nikki Garrett, who posed for the calendar with a carefully arranged lavender sweater covering her breasts. Zoo Weekly republished the photo with a caption describing her as “arguably the hottest hole on any green she plays”. The men’s magazine ended up forking out $150,000 after Evatt argued, among other imputations, that the magazine had suggested Garrett was “so lustful she likes having sex on a golf course”.

“She is a really nice woman, and it’s not even a terribly sexy pose,” Evatt said, flicking through the calendar. “Certainly not as bad as the others.”

If anyone was destined to be a lawyer, it was Evatt. His sister Elizabeth was the first chief judge of the Family Court; his father, Clive senior, was a barrister and NSW Labor politician; his uncle HV “Doc” Evatt was NSW chief justice and federal ALP leader. Clive’s first legal love was not defamation but breach of promise (also known as heart balm). This common law tort allowed a person, almost always a woman, to recover damages for a broken marriage offer. “They were the great cases,” he sighed. “The plaintiff never lost; you won every case.”

But in 1967 disaster hit. After 11 years at the bar, Evatt was suspended for professional misconduct. A year later, the High Court struck him off the NSW roll of barristers for assisting solicitors to charge excessive fees.

Evatt’s years in the legal wilderness weren’t wasted. He helped form a spectacularly successful professional punting syndicate called the Legal Eagles, and studied fine art at university. When he had a big win at the track, he would fly to London that day to buy Surrealist paintings. In 1972 he opened the legendary Hogarth Gallery in Paddington, which displayed and sold traditional Aboriginal art long before it became fashionable. (Disillusioned by the rise of conceptual art, Evatt has vacated the art game and now focuses on the toy and railway museum he runs in the Blue Mountains.)

Evatt was readmitted to the bar in 1981, 15 years after being struck off. To his dismay, breach of promise had been abolished, so he took up defamation (the law that allows people to sue for false statements that harm their reputations). Evatt says it was a way to avenge his relatives, who were smeared by the press as Communist sympathisers. “My father and my uncle really copped it from the media,” he says. “They were pretty cruel about them, and I welcome the chance to kick back at them.”

To many journalists, editors and media proprietors, Evatt is a pest who specialises in winning payouts for shonks and scoundrels. He will represent clients on a no-win, no-fee basis and appeal adverse verdicts all the way to the High Court. Tangling with him can mean years of expensive legal action; even if a media outlet wins a court case, it could still lose millions of dollars if his client is too poor to cover costs. It’s often cheaper to give in and settle, even if the outlet stands by its story as fair and accurate.

Evatt tells a different story. He paints himself as the battler’s best friend, the Robin Hood of reputation. Taking on the media over cruel and inaccurate stories, he argues, is to fight for social justice. He points to a current case in which he is representing a Sydney fish-and-chip shop owner slammed by 2GB’s Ray Hadley as “vile” and a “grub” for standing by a husband convicted of aggravated indecent assault. Evatt has nicknamed Hadley “Judge Dredd” after the comic strip character who convicts, sentences and executes offenders on the spot.

“I like to act for the poor person who otherwise would never be able to sue,” he said. “I see defamation as a brake on the media. They have no authority to defame or denigrate innocent people.”

Richard Ackland isn’t sold. “Lawyers always love giving justifications of noble causes,” he says. “Clive is a mischief maker. I think Clive loves the hunt, and it’s been very rewarding for him. He’s a charming rogue.”

Defamation cases are unique in Australia because, unlike other civil trials, they are still heard before a jury. This delights Evatt, who is regarded as one of the best jury advocates in the country. Like Billy Flynn, the slick lawyer in the musical Chicago, he knows the law is a form of show business. To win a jury over, you’ve got to razzle dazzle ’em.

“The court is like Clive’s living room,” said a media lawyer who has gone up against Evatt in many cases. “He presents himself as this confused battler siding with the little guy.” The lawyer recalls Evatt deliberately mispronouncing degustation — “What does it mean? Disgusting?” — to win favour with working-class jurors; he also remembers him coughing and tearing paper to distract the jury when an opponent lawyer was speaking.

Another top barrister said: “His general style is organised chaos. He gives the impression he’s fumbling and bumbling around when up against QCs and big legal teams to win sympathy with the jury. Clive gives very candid assessments of his clients, sotto voce — ‘how will I go representing this maniac?’ It’s all about disarming you. Clive likes people to underestimate him, and many do.

“He has a very sharp turn of phrase and can get the most damaging answer from a witness in two questions when other barristers would take 22.”

While Evatt relishes seeing media outlets make massive payouts, he insists he doesn’t hate the press. In fact, he’s that rarest of breeds: a defender of phone hacking. “I’ve got absolutely no axe to grind against Murdoch. Just to show you how sick I am, I don’t believe the journalists at the News of the World were doing anything wrong. They were hacking into the messages of celebrities, and I can’t see what’s wrong with that.”

It’s unclear to what extent Evatt, who loves playing the provocateur, genuinely believes this. He continues: “What’s wrong with a bit of bias in a newspaper? I admire Rupert Murdoch for what he’s done; he’s built up great newspapers. My favourite paper is The Australian — I think it’s a great paper. And in its way The Daily Telegraph is a good paper, although it’s a bit dumbed down. It has great book reviews that actually tell you whether a book is worth reading.”

But he’s no fan of today’s restaurant reviews: “They are pathetic — there’s no bite.” Evatt admits he may be partly to blame for this. He went up against the SMH over a 2003 review describing restaurant Coco Roco as “a bleak spot on the culinary landscape” with flavours that “jangled like a car crash”. After nine years of legal battles — including several trips to the High Court — the restaurateurs won.

That was one of Evatt’s biggest wins — as was securing $90,000 in damages for former Daily Telegraph sports journalist Ray Chesterton when John Laws called him “ankles” on air. Evatt argued that “ankles” was a colloquial term for a despicable person (“lower than a c–t”).

But there have been losses. Big ones. After a six-year legal battle that morphed into a quasi war crimes tribunal, The Australian won a High Court case against Evatt’s client Dragan Vasiljkovic, a Serbian military commander accused of overseeing torture and rape in the Balkan conflict in the 1990s. And in August Fairfax triumphed over bookmaker Tom Waterhouse, represented by Evatt, in a case concerning a critical Peter FitzSimons opinion piece.

But the losses leave him undeterred. At an age when most people are well into retirement, he continues to take on 20 to 30 cases at once and works from 7.30am to 6.30pm.

“I don’t want to play bowls all day,” he said. “I’ve got arthritis, my mind went long ago, but I’ll keep plodding on. I don’t have the upper echelons. I am down with the plebs, and I enjoy winning for them, even if it’s hard.”

“to win favour with working-class jurists” You mean “jurors”. A jurist is a legal scholar.

Perhaps a series based on Evatt would give ABC’s ‘Rake’ a run for its money.

“I like to act for the poor person who otherwise would never be able to sue,” he said. “I see defamation as a break on the media. They have no authority to defame or denigrate innocent people.”
I respectfully suggest that he meant that defamation suits are a BRAKE on the media.

Thanks Thomas and Hugh (Charlie). Fixed.