Sri Lanka hoped that hosting the Commonwealth Heads of Government Meeting would showcase its development since the Tamil war. But it hasn't quite worked out that way. 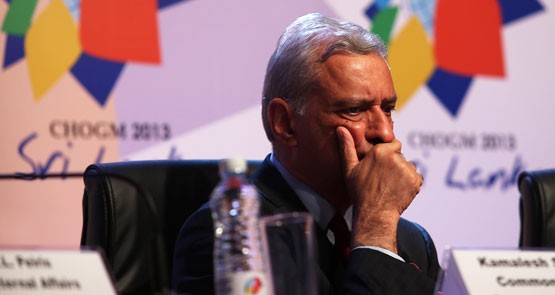 Sri Lanka’s hosting of the Commonwealth Heads of Government Meeting has gotten off to a troubled start, with Indian Prime Minister Manmohan Singh withdrawing his participation over the host country’s human rights record. This follows a decision by Canadian Prime Minister Stephen Harper to also boycott the event due to human rights concerns.

British Prime Minister David Cameron is attending the event but has called for an independent international investigation into Sri Lanka’s human rights record if there is no meaningful progress by the Sri Lanka government. This marks an escalation of British pressure on Sri Lankan government, as it is the first time that the UK has called for an international investigation into the deaths of some 40,000 people in the closing stages of Sri Lanka’s Tamil separatist war.

While Australian Prime Minister Tony Abbott is attending, his own visit has been overshadowed by the detention of Greens Senator Lee Rhiannon and New Zealand Greens MP Jan Logie. The two Greens politicians were attending pro-democracy meetings when they were detained and questioned, before being deported.

Singh withdrew from the CHOGM under pressure from Indian politicians, in particular from the large Tamil Nadu state in south-eastern India. While Sri Lanka’s Tamils are largely separate, the two groups have retained close cultural contacts, and the Tamil Nadu government provided support to Tamil Tiger rebels in the 1980s.

India is also concerned about the growing influence of China in Sri Lanka, given Sri Lanka’s strategic proximity to India. China helped arm the Sri Lankan army for its final push against the Tamil Tigers in 2009 and has since invested heavily in the country, including helping to build a port in the south of the country.

Since the Sri Lankan government crushed the Tamil Tigers, there have been increasing concerns about broader human rights issues. These have included forced disappearances, sexual violence against Tamil women, attacks on Sri Lanka’s media and what is said by critics to be an increasing closure of Sri Lanka’s democracy.

Abbott will attend CHOGM, in part not wishing to offend a government that has been quite willing to assist with stopping asylum seekers leaving Sri Lanka for Australia by boat. However, the conditions that compel at least some Sri Lankans to leave their homes for the risky journey to Australia will now receive closer attention by the international media.

The Sri Lankan government had hoped to showcase the country’s development since the end of the Tamil separatist war. Increasingly, however, the international media is focusing on stories a little more critical than an otherwise largely anodyne meeting in a country that has such a bloody recent history.

*Professor Damien Kingsbury is director for the Centre for Citizenship, Development and Human Rights at Deakin University. He is author of Sri Lanka and the Responsibility to Protect: Politics, Ethnicity and Genocide, Routledge 2012.

CHOGM’s in tents experience comes to an end

CHOGM: Barnett’s evocation of security on the money, but target is not

That last para pretty well sums up the only positive of this particular CHOGM.

The current Sri Lankan Govt hasn’t managed the difficult path from civil war to peace at all well.

Such a lovely country, reduced to such a bloody mess.

Abbott will go, he needs the PR and photo-ops.

Why Australia has talked itself into believing that spending billions to keep out the very few refugees who ever get here and billions more to jail and traffic those who do is sensible and rational beats me, but the MSM have been part of the lazy racist conspiracy that enables it.

When not presented with daily pressers the morons all go to sleep.