The Daily Telegraph has called out Tanya Plibersek for using taxpayer funds to fly her family to part of her electorate for constituent business -- although that is easily within the rules. So what did she do wrong then?

McKenzie blasts The Oz over Leightons. Fairfax investigative reporter Nick McKenzie has lashed out at The Australian for its coverage of the Leighton Holdings bribery scandal, accusing the paper of sour grapes, unbalanced reporting and undermining journalists’ confidential relationships with their sources.

Ex-Leightons boss Wal King is suing Fairfax for defamation over their articles, based on internal company documents, alleging he was “in the know” about alleged corruption and cover-ups at the company. Nick McKenzie and Richard Baker’s most explosive report was based on a note written by acting Leightons CEO David Stewart in November 2010 alleging King approved $42 million in kickbacks to Monaco-based company Unaoil.

King declined to comment to Fairfax before publication, but has since vigorously denied the allegation.

Following Fairfax’s initial reports, The Australian’s senior business writer Damon Kitney has run a series of stories based on King’s angry correspondence with the company.

McKenzie told Crikey: “It’s a pity The Australian seems more concerned with uncritically running Wal King’s side of the story than with doing any digging of their own … It’s a pity the reporter in question would so uncritically run one version of events without bothering to contact either myself or Richard Baker.”

McKenzie says he is particularly angry at today’s story, which highlights the prospect of the Australian Federal Police investigating how Fairfax Media gained possession of confidential documents. Wakley Award winners McKenzie and Baker have been in court several times this year battling attempts to force them to reveal their sources.

“Every journalist should be wary of parties engaging in source witchhunts,” McKenzie said when contacted this morning. “Richard and I have a proud record of protecting our sources in all circumstances. The act of going after sources is designed to silence dissenters and stop good journalism. It should not be encouraged. Had The Australian broken the story itself, one wonders whether the coverage would have been entirely different.” 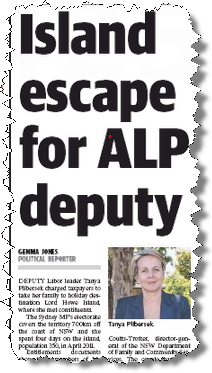 But Plibersek’s travel claims, for a trip she took in April 2011, appear to be were entirely above board. According to the report, the Sydney MP took a four-day trip with her family to Lord Howe Island, located 700 kilometres off the coast of NSW — the island is part of her electorate. She had a series of meetings with constituents. In a response to the Tele’s enquiries, Plibersek’s spokesman said the MP attended to a number of duties while on Lord Howe Island, including an Anzac Day memorial service and a meeting with members of the island’s board.

Parliamentarians are entitled to claim costs related to domestic travel, car costs, travelling allowance and family travel for “official business” made within their electorates. The Parliamentary Entitlement Act states:

Plibersek’s claim of $908 was entirely within the rules of what can be claimed by parliamentarians, as the Tele concedes: “There is no suggestion Ms Plibersek’s claim was outside rules governing MPs’ expenses”.

As recent media reports have shown, Attorney-General George Brandis and Deputy Nationals Leader Barnaby Joyce took a more creative view of travel allowances, clocking up thousands in taxpayer-funded entitlements to attend the wedding of shock jock Michael Smith two years ago. Brandis repaid $1683 in September when Fairfax Media exposed the spend, which covered flights, hire cars and incidental expenses incurred on the trip. Joyce recently repaid $600, which had been spent on transport in a Comcar to his hotel.

We have to ask the Tele, what exactly did Plibersek do wrong — and is travelling for meetings in her own electorate really the same thing as jetting off to a rugby match on the taxypayer dime? — Virginia Millen

BSkyB shares fall after soccer loss. A rude, $US2.4 billion-plus shock for the Murdoch empire came on Monday when UK investors gave BSkyB shares a right towelling after pay TV rival BT outbid it for the UK TV rights to the major European football competitions the Champions and Europa leagues.

BSkyB shares tumbled 10.9% in trading overnight, cutting the pay TV giant’s value by 1.6 billion pounds, or close to $US2.5 billion. Shares had closed at a 12-year high on Friday (and close to 125 billion pounds in value) on rising speculation that Murdoch might be thinking of a renewed bid for the company after 21st Century Fox last week revealed plans to boost earnings by 50% in the next three years.

It was the biggest fall in five years for BSkyB shares and came as a reaction to the company’s first major auction loss to BT. BT will pay 900 million pounds for the rights to the two competition from 2015. That gives it the rights to show 350 games a season (many of which won’t interest UK TV viewers). Its bid was more than double of the amount paid in the current contract by Sky and ITV.

Murdoch’s 21st Century Fox owns 39% of BSkyB and has management control. Murdoch tried to buy the other 61% two years ago, but the News of The World phone hacking scandal forced him abandon that ambition. — Glenn Dyer

Bolt and the cat’s miaow. Andrew Bolt joined 2GB’s Steve Price yesterday to “discuss the latest in news and politics”. The pair speculated how Bronwyn Bishop will go as speaker when Parliament sits for the first time under an Abbott government today. The show ran a grab of former speaker Anna Burke’s thoughts, when she was asked about the sometimes adversarial Bishop in the big chair. Burke said: “It’ll be interesting to see … I think she’ll have it easier, she won’t have to put up with herself.”

Bolt responded with a cat’s “miaow”, then realising how it sounded, followed with: “Am I allowed to say that? Sorry, I take that back. How sexist.”

60 Minutes apologises. American TV current affairs program 60 Minutes apologised at the end of its program on Sunday night for its incorrect story on the 2012 attack on the US government mission in Benghazi, Libya. Correspondent Lara Logan, who reported the October 27 story, said the CBS flagship news program had been misled by the main source, British security contractor Dylan Davies. Davies, who has written a book under the pseudonym “Sergeant Morgan Jones”, told 60 Minutes he had fought his way into the compound while the September 11, 2012, attack raged and later saw the body of ambassador Christopher Stevens, who was killed that night. Davies’ story was exposed as a lie when it was revealed that his account on 60 Minutes and in his book was different from what he told the FBI investigators.

60 Minutes had strongly defended the story after airing it on October 27. But when Davies’ lie was exposed, the program retracted the report late last week, and Logan went on CBS’s morning and evening news programs to apologise. Sunday’s 90-second on-air retraction was supposed to be a more comprehensive explanation. But that hasn’t satisfied some critics. — Glenn Dyer

Front page of the day. New York Magazine has printed the stories of 26 women who have had abortions, echoing a landmark article along the same lines in Ms Magazine in 1972, when abortion was still illegal in the US. The stories of pain, shame, stigma, support, family and love show that not a lot has changed in the intervening years. 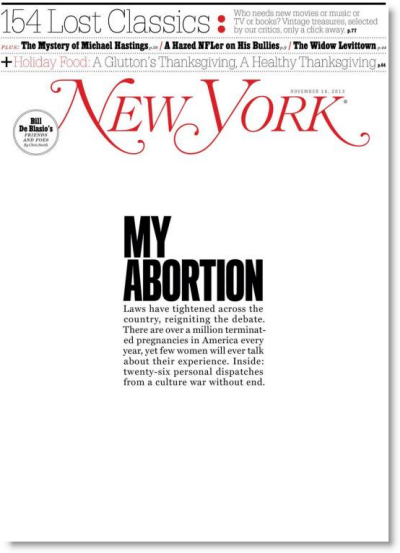 “Jammer” Jones – which foot did she shoot this time?