With Indonesia, the relationship is going from bad to worse

Relations between Australia and Indonesia have reached a nadir. And it's entirely the fault of Australian policy. The government's turn-back-the-boats policy is now in tatters. 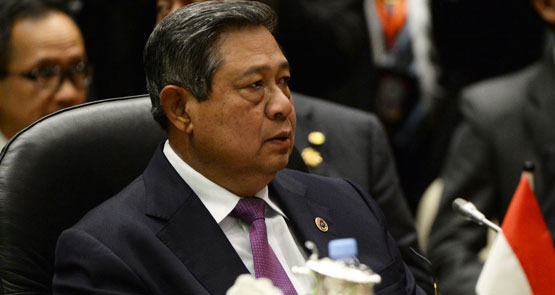 Australia’s relationship with Indonesia is at one of its historic low points, despite claims to the contrary by Prime Minister Tony Abbott. What is unusual about this most recent contretemps with Indonesia, with which Australia has previously had several difficulties, is that, unlike in the past, the current problems are entirely a consequence of Australian policy.

Australia’s alleged spying on Indonesia is both bipartisan and largely necessary. But Foreign Minister Julie Bishop has not yet moved to allay concerns in Jakarta by saying Australia’s intelligence program will be reviewed and offensive activity ceased (even if it will not).

However, the Australian government’s handling of the asylum seeker issue has been purely a matter of domestic political choice. It is an “own goal” that was part of the planning for the game.

That policy is all but in tatters, following Indonesia refusing to readmit 63 asylum seekers bound for Australia. According to Indonesian authorities, this is the third such refusal to accept back asylum seekers; Immigration Minister Scott Morrison has finally acknowledged it was at least the second such rebuff, not having acknowledged previous problems in his less-than-frank weekly briefings on the asylum seeker issue.

Indonesia’s Co-ordinating Minister for Legal Political and Security Affairs, Djoko Suyanto, is expected to soon formalise Indonesia’s permanent refusal to accept asylum seekers from Australian rescue vessels, other than in emergency situations. This would appear to end the government’s plan to return asylum seekers “when safe to do so”. Indicating Indonesia’s growing frustration with Australia, on Friday, Djoko said:

“The Indonesian government never agreed to such wishes or policies of Australia. This has been conveyed since the time of Kevin Rudd, and there is no change of policy regarding asylum seekers wanting to go to Australia under the current Abbott government.”

Following Djoko’s statement, the Australian government backed down on its push to have Indonesia accept the asylum seekers.

Anger in Indonesia over Australia’s attempt to return the asylum seekers has further damaged relations already seriously strained over allegations of Australian spying in Indonesia. Indonesia’s presidential spokesman Teuku Faizasyah has again reconfirmed that spying on Indonesia is “unacceptable”.

In response, he said that Indonesia “will take steps that cannot be disclosed to the public”. Indonesian Foreign Minister Marty Natalegawa has already identified co-operation on people smuggling and terrorism as areas that will be “reviewed”.

The government’s closely controlled media management strategy also appears to be coming unstuck over these two issues, with Indonesian authorities either contradicting or providing alternative accounts of matters that the Australian government is only reluctantly revealing.

The issue of Australia spying on Indonesia is far from resolved, and the asylum seeker issue is now front and centre. No doubt, where Indonesia is concerned, the government must be hoping that bilateral policy issues don’t come in threes.

*Professor Damien Kingsbury is director of the Centre of Citizenship, Development and Human Rights at Deakin University

Perhaps the third issue is the upcoming Indonesian elections.

When the new government told us that we weren’t going to be given any information about refugee boat arrivals I read interviews with Christmas Island residents who said they’d be happy to let us know what was going on there. Can somebody tell me why that seems to have never happened? Have these whistle-blowers suddenly got cold feet? Have they been threatened? Bribed? Or are our news media playing Abbott’s game and keeping us in the dark?

The results from the ministrations of a patronising and paternalistic government.
Probably exacerbated by the antics of the Bishop Princess of Plagiarism misrepresenting certain realities, after which the Indonesians have to “leak” to set the record straight?

‘What is unusual about this most recent contretemps with Indonesia, with which Australia has previously had several difficulties, is that, unlike in the past, the current problems are entirely a consequence of Australian policy.’

It is not just the policies. It is the Liberal Government people. They are arrogant and insensitive. They just have to be, in the eyes of Indonesians, serial misrepresenters at best, and serial liars at worst.

Bishop serially misrepresented the content and tone of her meetings with Natalegawa. He retaliated by publishing a record of meeting – a serious diplomatic no-no. Bishop now nominates Natalegawa as a ‘good friend’. Sure.

Bishop, before the elections, announced that the Coalition policies were implementable regardless of what Indonesia thought. Sure.

Morrison says that he can’t see ‘rhyme nor reason’ in the way Indonesians make decisions about accepting rescued asylum seekers. Sure. The Indonesians are crazy, right?

Morrison says that he approached the Indonesians to accept rescued asylum seekers in confidence. Then he announces that this is what he has done. How confidential is that?

Bishop and Abbott repeatedly announce ‘respect’ for Indonesia but have done nothing to take disrespectful policies – paying Indonesians for information (on ground spying!) and buying Indonesia boats being a couple that could safely be ditched. But all three insist that none of the policies are off the table.

Finally, there is the birds-of-a-feather issue. Abbott was interviwed by Alan Jones this morning, for example. The Indonesians know perfectly well the track record of Jones, Hadley, Barnardi and sundry burka-baiting Liberals. Abbott hangs around with these people all the time. He keeps them in his Party. But Abbott cannot go ‘barley charley’ to the Indonesians on that. There is no confession, penance and absolution in that particular space. So, it turns out that if you lie down with islamophobic dogs, you get up with an international flea in your ear.

This is all to the cost of our national interests – if the anxious pleas from Australian business interests are to be believed.

Recently, Abbott rabbited on overseas (casually smashing yet another traditional convention) about the previous Labor Government being ‘wacko’.