ABC talent heads for the door before promotion? ... bikies don pink onesies in Newman protest ... which ministers enjoy a ciggie on parliamentary grounds? ...

ABC reshuffle. Did last week’s surprise resignation of Jennifer Collins as ABC TV’s head of entertainment upset a re-organisation at the public broadcaster? There’s a rumour that the director of ABC TV, Richard Finlayson, was preparing to offer Collins a job as head of content (presumably either head of fiction or factual content). Collins was highly regarded at the ABC and is believed to have been interviewed for the director’s job at ABC TV. But she departs next month for the private sector, namely the head of non-fiction at Screentime (Underbelly, Brothers in Arms, etc). It’s owned by Banijay Group, a European production house created in January 2008 “by a team of experienced professionals lead [sic] by Stephane Courbit and powerful private investors : the Agnelli family (Fiat), the De Agostini family, Jean-Paul Bize (AMS Industries) and Bernard Arnault (LVMH),” according to the Banijay website.

Newman v bikies.Bikies (and civil libertarians, and Anonymous) are not happy with the Queensland government’s draconian anti-bikie laws. This is our favourite protest to date: 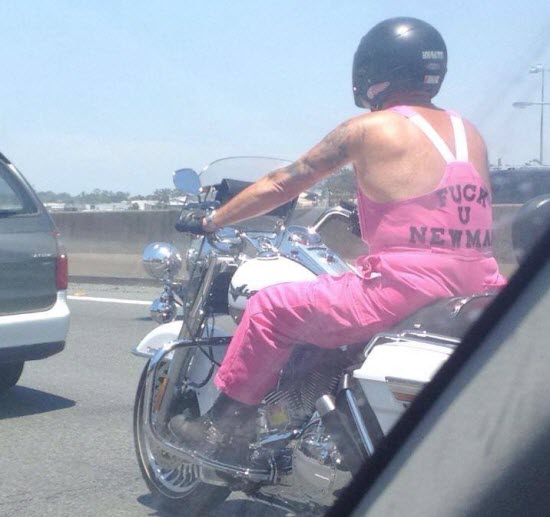 Another tipster from north of the border told us this: “something I heard today just went beyond the ridiculous — the police officers standing guard outside the premier’s building (presumably to ward off all the evil bikies) have been instructed not to smile at anyone, including people they know.” Oh well, what do you expect from the state that gave us Joh Bjelke-Petersen?

This government is smokin’. Last week we hinted that Treasurer Joe Hockey doesn’t mind a cigar. A few cheeky parliamentary moles passed on the goss on which ministers like a ciggie, but it seems the location may have to change:

“With regard to smoking Tories, in opposition their favourite spot for a crafty durry used to be a courtyard off the south of the Reps wing of Parliament House. They may decide to move now, given the spot can be seen clearly from the Health Minister’s office …”

We got quite a few tips about one particular minister (and Q&A fave) who “can be seen sucking down cigarettes on a daily basis in the House of Representatives Courtyard”. You wouldn’t think it, given his schoolboy looks … but we wouldn’t want you to think that smoking is a Liberal trait. Ms Tips remembers covering state politics 10 years ago when all key ministers in the then-Labor government smoked like chimneys; they’d take a flight somewhere and upon arrival, dash outside like Olympic sprinters and desperately suck on ciggies.

Over in the States, it’s fair game for the media to report whether a president smokes or not. US President Barack Obama was a smoker, but he has largely or entirely kicked the habit (depending on who you listen to). The White House sometimes releases medical reports from the president’s doctors detailing his bill of health, an interesting practice that doesn’t happen here. We’d call for it with Prime Minister Tony Abbott, except we suspect it would be a dull document detailing his excellent health.

Parliament resumes. All eyes will be on Canberra tomorrow as the 44th Parliament sits for the first time. Will the newly elected member for Fairfax, Clive Palmer, really take his seat on the green leather? Looks like it — this update from News Corp reporter Malcolm Farr this morning (this could be a hashtag to watch):

Wake Up spied. Last week we told you the stars and staff of struggling Ten morning show Wake Up were to be treated to lunch at Sydney’s Rockpool on Friday. There might have been a change of plan:

“The Wake Up hosts and Lachlan Murdoch actually had lunch at a rather empty Blue Eyed Dragon in Pyrmont. The restaurant is situated in a converted church hall and they all sat up on the old stage with an empty restaurant below which was rather fitting considering the week’s ratings.”