The science of efficiency: CSIRO cuts are worse than you think

The CSIRO does important work, and the cost to Australia will be immeasurable if scientists lose their jobs. Science writer Stephen Luntz explains what it's like to be a scientist in tough times. 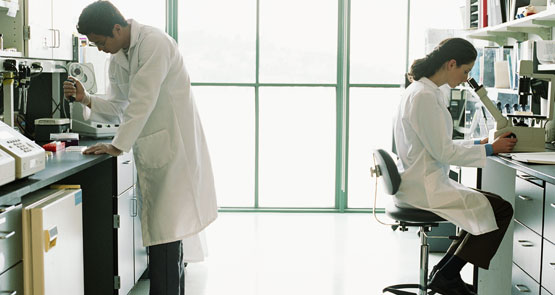 Following closely on the decision to scrap the minister for science, there has been outrage at news that up to 1400 CSIRO employees will not have their contracts renewed.

Some context is useful to see just how awful this decision is. The first thing to understand is the exceptionally tenuous position of most early-career scientists in Australia. After finishing an undergraduate degree and honours, the next stage for those interested in expanding society’s collective knowledge is usually a doctorate.

PhD theses are extremely important to our understanding of the world. Roughly 10% of the 200 papers I cover each year at Australasian Science Magazine have PhD students as the lead author (although the work is often only published in a peer-reviewed journal after the doctorate is granted). Students make significant contributions to plenty of other work as well, but they’re not paid like it. It’s possible to live on the scholarships most doctoral students have, but not live well unless you’re very lucky with rent. Almost all PhD students are still working on their theses when the money runs out. Going into deep debt while working 60-hour weeks writing up is a sign of true commitment.

For students in many other fields, graduation usually means a degree of security in a well-paid job. Scientists, however, usually find themselves on what is sometimes called “the postdoc circuit”, needing to bring in their own funding just to get paid, let alone access research facilities. CSIRO (the Commonwealth Scientific and Industrial Research Organisation) has traditionally been something of a haven from this, with less time spent on ceaseless writing of grant applications and more chances to do long-term work. Although contracts are often short, there was an expectation most would be rolled over if the work was going well, rather than depending on the vagaries of funding bodies, which can only approve 20% of the submissions they receive.

The hundreds of CSIRO scientists about to find themselves out on the street are not, in most cases, on temporary contracts because they are no good, but because that is how science works here. Many will be partway through a project when their positions unexpectedly end. Without a chance to finish, their work may never be published, wasting the money taxpayers have invested and blighting their chances of getting a position somewhere else.

One of Australia’s most-awarded scientists published a paper recently offering hope for remedying a particularly tricky problem researchers have been fighting for more than 60 years. He told me in confidence he had run out of money to pay the researcher who had done most of the work and was “paying him out of my own pocket”. Unless senior CSIRO figures are similarly generous, the losses will be incalculable. Some institutions are experimenting with crowdfunding, but this is only an option for particularly cheap projects on popular topics.

Not every project will prove as economically important as the work that led to wi-fi, or saved the racing industry, but the collective value of everything being done at CSIRO to Australia will prove vast, even if one ignores the projects that are precious in ways no monetary value can capture.

“Don’t worry,” the Coalition will assure us. “Progress won’t halt. If research is important enough it will be done overseas.” Leaving aside the moral bankruptcy of a nation riding high on the resources boom expecting poorer nations to solve the great problems of the world, this does not consider the fact that many of the topics CSIRO tackles will be ignored elsewhere, because they are unique to Australia.

If Australians didn’t find a solution to the rabbit plague that was pushing our agricultural industries to the edge, no one else was going to do it, just as no one else will work out how to stop cane toads. If CSIRO and the universities it works with don’t figure out what the impact of global warming will be on water flows in the Murray-Darling Basin, we can’t expect American or European institutions to take up the slack. If CSIRO does not keep watch against new infectious diseases, or discover the best time to conduct fuel reduction burns under Australian conditions, or find a way to detect mineral deposits under the unusually thick layer of surface materials that covers this ancient continent, no one else will.

It is for these reasons CSIRO exists. A large portion of these problems are about to go unsolved.

*Disclosure: Stephen Luntz has worked for the Greens on electoral matters

The science behind our vanishing beaches

On the other side of the world, a zoologist is counting The Australian’s climate deniers

Absolute vandalism for what, to solve a budget emergency that doesn’t exist, while Hockey blows billions on tax rorts and a multi-billion dollar currency punt.

I agree that this is a very poor outcome. If the Government wants to cut CSIRO’s budget it should do so in the normal budget process so the organisation can do it most sensibly.

I believe that this is part of The Revenge of the Bogans whose precious self esteem was dented at school by the smart kids.
Conservative politicians abetted by Murdoch and his ilk take advantage of this at colossal long term harm to the Nation.

For the Murdoch conservatives now government a supreme effort has to be made to achieve mediocrity; an easy first is to curtail the CSIRO. Good science, research and development does not run in tandem with aspirations of mediocrity.

Perhaps the only “positive” to come out of this debacle, is that even your average bogan might think that disembowelling the CSIRO is probably going a bit far.

I’ve even heard the odd muttering around the rural traps, bemoaning slashing budgets that could (gasp) impact the farmers!

Still, every time I think Abbott’s band of vandals couldn’t be any *more* foolish or clueless, they proceed to prove me wrong.