One of the co-founders of New York’s celebrated High Line, Robert Hammond, is in Australia explaining the fascinating story of how a disused elevated railway line on Manhattan’s west side was turned into a beautifully landscaped linear park. Given its high international visibility and iconic status, it’s not surprising cities around the world are keen […] 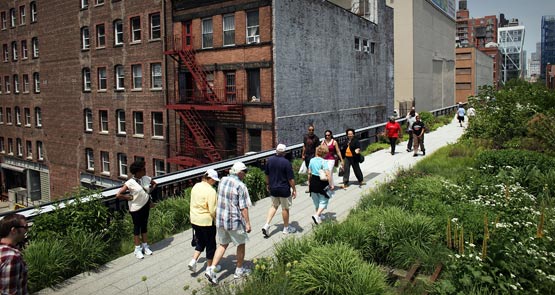 One of the co-founders of New York’s celebrated High Line, Robert Hammond, is in Australia explaining the fascinating story of how a disused elevated railway line on Manhattan’s west side was turned into a beautifully landscaped linear park.

Given its high international visibility and iconic status, it’s not surprising cities around the world are keen to understand the secret of the High Line’s success and emulate it if they can. Writing in The Conversation this week, Melbourne University academic Kim Dovey said:

“The obvious lesson from the Highline lies in the opportunities that emerge when trains are removed from the city.”

Dovey’s right on that score, but I think there’s a number of other issues the High Line brings up for the managers of cities elsewhere, especially those whose imagination and ambition has been fired by New York’s success (e.g. see New York-style elevated park plan for Ultimo).

First, in some cases we’d be better off reserving disused infrastructure for its original or related purpose rather than redeveloping it as a park or something else. Sydney’s new light rail line from Central to Dulwich Hill was feasible because it largely uses an abandoned rail line. Likewise, the extension of Melbourne’s Epping rail line to South Morang uses the alignment left over from a disused track. It’s likely reusing these reserves for new rail lines gives a higher social return than it would have if they’d been developed as (say) linear parks.

Second, a related issue is that if disused infrastructure is given another purpose, it could be very hard to come along later and reuse it for its original purpose. For example, the alignments of Melbourne’s former Inner Circle and Outer Circle railway lines were converted to linear parks with walking/cycling trails. Any proposal to now reuse some of the reserve for an orbital light or heavy rail line (e.g. to assist with decoupling of the South Morang line) would meet with stiff opposition from residents.

Third, some disused infrastructure should simply be pulled down. There was a proposal last year for Sydney’s monorail to be re-purposed as a cycle and pedestrian path, but as I explained here, the city would be better off if the blight were removed entirely. I also think Sydney would be better off if the frequent calls to demolish the Cahill Expressway were acted on rather than (say) converting it to a linear park in the manner of the High Line.

Fourth, landscaped walking and cycling trails are valuable in their own right. It isn’t necessary to wait for the rare occasions when infrastructure is no longer needed for its original purpose. We can build paths now if we want, including elevated ones like the High Line. They make sense for walking and cycling because these are modes where the quality of the journey itself matters much more than it does for driving. Much of the appeal of the High Line comes from the novel perspective of the city it provides.

Fifth, projects like the High Line aren’t universally well-received. It’s been criticised for aiding gentrification of the areas it passes through. Some New Yorkers complain (e.g. Disney World on the Hudson) about the hordes of tourists and the declining profitability of light industrial businesses like the auto service establishments in the area’s “gasoline alley”.