All chess-interested eyes are on Norwegian Magnus Carlsen as he fights to become world champion. Australian grandmaster Ian Rogers says but for a twist of fate, it could have been been an Australian challenger. 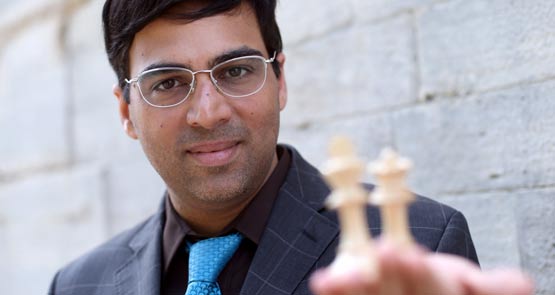 Driving along the Chennai coast in India, one might think Tamil Nadu Chief Minister Jayalalithaa Jayaram was the only competitor in the World Chess Championship match, which begins tomorrow. Jayalalithaa’s smiling face features on billboard after billboard, with a variety of chessboard backdrops and slogans such as “You are the unbeaten king” and “You always make the right move”.

Jayalalithaa has spent $6 million of the Indian state of Tamil Nadu’s money bringing the world title match to Chennai, and she is not about to let anyone forget that, although she does not need to stand for re-election until 2016.

The opening ceremony of the match at the Nehru Indoor Stadium seemed to have become an election rally when 8000 fans starting screaming for the arrival of Jayalalithaa’s car. (Before she began her political career in the 1990s, Jayalalithaa was probably used to screaming fans, having starred in more than 100 feature films.) The only person to get more cheers than Jayalalithaa was local hero and world champion Viswanathan Anand (pictured).

Described by Jayalalithaa as India’s greatest ever sportsman — a debatable comment (cricketer Sachin Tendulkar is not from Tamil Nadu) — Anand, 44, seems to be winding down after a storied career, and many believe that 2013 may be the year he surrenders the world title he has held for six years.

The man tipped to depose Anand is 22-year-old Norwegian Magnus Carlsen, the highest-rated player in chess history, the youngest world number one ever and the only player with the influence to have a grand slam final rescheduled to avoid a clash with New York Fashion Week. Yes, Carlsen is also a model, having worked for clothing company G-Star Raw in 2010. He has been re-signed for 2014.

Carlsen’s appeal to the non-chess world — he was also named one of Time magazine’s 100 Most Influential People in 2013 — is the reason media and fans have flocked to Chennai. More than 300 requests for journalist accreditation have been refused due to space limitations in the press centre, and tickets have been priced at $40 and up to avoid, as one organiser said, “lines going around the block”.

Australian fans, who for once are able to watch World Chess Championship games live at a reasonable hour, might have only one twinge of regret at Carlsen’s success — the thought that, in a parallel universe, it might have been an Australian grandmaster challenging for the world title. For Carlsen is partially the product of a training system developed in but never implemented in Australia.

In 1997, Gold Coast entrepreneur Graeme Gardiner conceived a plan for an elite chess academy that would be run along the lines of the Australian Institute of Sport, with students combining intensive chess training with school work. Somerset College, where Gardiner worked at the time, had agreed in principle to give the chess students sufficient flexibility to rearrange classes and travel to major tournaments while not missing out on schoolwork.

Serendipitously, Norwegian grandmaster (and former soccer star) Simen Agdestein happened to be studying in Sydney at that time and when he travelled to the Gold Coast for a tournament, Gardiner showed him the plan. Agdestein took a copy back to Norway, showed it to the Norges Toppidrettsgymnas — Norway’s AIS — and the rest is history. Agdestein became chief coach at NTG, and a 10-year-old Carlsen was part of the intake in 2000, staying with NTG for two years.

By the age of 13 Carlsen was a grandmaster, the youngest ever to secure all his title qualifications outside his home country. Meanwhile, Gardiner spent a decade searching for funding for his proposed chess academy before then-Queensland premier Peter Beattie and his department agreed to fund the project. However, shortly thereafter Beattie was replaced by Anna Bligh and the funding was withdrawn.

Gardiner had by then set up his own chess centre, catering to the masses, and could only watch ruefully as Norway, not long ago a weaker chess nation than Australia, produced a string of young grandmasters, with Carlsen leading the way.

Whether the planned Australian Chess Academy would have found and nurtured a player as prodigious as Carlsen is unlikely — Carlsen is a once-in-a-generation talent — but with all of Asia as a catchment, it was not impossible.

In the real world, Carlsen is hot favourite to take Anand’s title and become the first Westerner to win the world chess title since Bobby Fischer in 1972. One needs to go back another 37 years to find the last Western European to prevail in a World Championship match.

The match will be a best-of-12 contest run over almost three weeks, with rapid playoffs deciding if the score is tied at 6-6. The winner will receive $1.5 million, the loser a round $1 million. Australian fans who wish to follow the match closely can do so via the official World Championship web site. Games start at 8.30pm AEST.

Another opportunity lost. Thanks for this interesting background into what might have been.

Meantime mega dollars are poured into a tiny percentage of our population – athletes who have finite value physically. Whereas chess players become better with age.

Thanks for the article and the background story which is different from the rest of the media from the rest of the world.
I think Australia could easily have produced another challenger, probably not another Carlsen*. I have done a quick study of the chess player born in around the same years as Carlsen, and one non-Chinese and non-Indian stands out: GM Wesley So, who is younger than Carlsen. It seems Wesley was largely self-taught. Just think what could he have achieved if something similar to the Norwegian school was available.
Carlsen is unique as he is the product of genes (phenomenal memory), culture (supportive but not too pushy parents, supportive coaching school at the right time), and opportunity (parents and family took a year off and travel around to chess tournaments).

PS, Will Ian Rogers be commenting on the games at Crikey? Game by game or just regular updates. Hope it is game by game. A lot of chess players in Australia would be happy for an Australian commentary. On official website, they have an Englishman and an Hungarian-US commenting.

Thanks Ian and Crikey for setting the scene for what should be an historic match.

Any chance of Crikey covering the actual match? Our mainstream media here are more interested in local ‘reality’ TV shows where the winner might get a low 6 figure sum and a car and be forgotten by next year, than a global event watched by people from every country on earth, where the loser pockets a million dollars.

Interesting background article. Can’t wait for the championship to begin … it’s great that the games are at a civilised time here in Australia. I have to say that I’d love to see Anand win but I can’t see that happening. Hopefully it will be a really tough, competitive match.