Newspapers continue to bleed, with fresh circulation stats showing double-digit drops in sales of Fairfax and News Corp titles over the last quarter. The one publication that is not dropping by too much? TV Week. 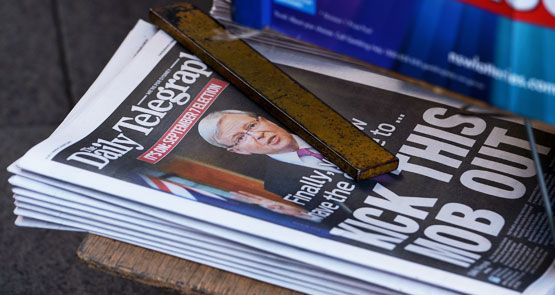 An election campaign dominated by debate about media bias failed to stem the bleeding for newspaper publishers, with Fairfax and News Corp’s biggest-selling titles suffering double-digit circulation declines in the last quarter. News Corp tub-thumper The Daily Telegraph — which ran a front page editorial on day one of the campaign urging readers to kick Labor out — was one of the biggest losers, according to the Audited Media Association of Australia.

The good news for publishers is that Australians appear increasingly willing to pay for content online. The Australian had 55,991 digital subscribers, up 10% on the previous quarter; Melbourne’s mass-market Herald Sun had 37,564, up 22%. As Fairfax CEO Greg Hywood told shareholders yesterday, The Age and The Sydney Morning Herald have attracted 86,000 paid subscriptions between them, on top of 102,000 print subscribers who have signed up for digital access. The SMH has a total masthead audience (print, web, mobile and online) of 4.5 million, ahead of the Herald Sun on 4.1 million.

The problem is the cash from digital subs isn’t coming close to making up for the decline in print advertising — hence more redundancies and a push into events and content marketing. “We’re using a shotgun when we used to use a rifle,” a Fairfax executive said, reflecting on the company’s cash flows.

Zeroing in on the dead tree editions, Fairfax Media‘s circulation decline still hasn’t bottomed out. Among the big titles, the weekday Melbourne Age was the worst performer with circulation dropping to 133,981 — a 15.45% decline on the same period last year. The Sydney Morning Herald was close behind, with circulation down 15.23% to 136,623. The Sunday Age slipped 13.31% to 167,775 while The Sun-Herald fell 15.22% to 273,790. The Sun-Herald was one of the titles singled out for potential extinction in a Fairfax product review, but continues to cling on.

The Australian Financial Review‘s drop was less dramatic — down 6% to 64,270 copies sold a day. The Canberra Times slipped 10.42% on weekdays to 25,228 while The Illawara Mercury and Newcastle Herald fell by 19.74% and 13.42% respectively. Can Fairfax’s circulation revenues continue to rise — as they did over the past year through cover price rises and freebie cut backs — with the numbers falling at this rate?

Here are the average daily print circulation figures for July to September, compared to the same quarter the previous year:

Time to celebrate hey Matthew…maybe one day you’ll only have to write blogs and the Huffington post….that’ll make life easier

These numbers are rigged. For instance there would be absolutely no chance that a million Sunday newspapers were sold in NSW. That is like one in 3 households. They are about as meaningless as the radio ratings. Clearly these ratings are controlled by the advertising industry at the expense of poor advertisers. The sooner the advertisers wake up the sooner we can save a few trees being converted to newsprint.

The unanswered question is the reason for the drops in circulation. Are the pictures in the telegraph and hun too difficult for the illiterate to understand? should they use more colour? or should they give away crayons with every paper?
Gee those education funding anomalies favouring private schools and cut backs to public schools have been a huge success.

Savonrepus, maybe I’m missing something here, but the total of the Sun Herald and the Sunday Telegraph is 790,374 and the populationof the greater NSW area is about 7.3 million, so maybe one in ten?

And btw almost 800,00o copies each Sunday is a bunch more than Crikey ech week..

Savonrepus, maybe I’m missing something here, but the total of the Sun Herald and the Sunday Telegraph is 790,374 and the populationof the greater NSW area is about 7.3 million, so maybe one in ten?

And btw almost 800,000 copies each Sunday is a bunch more than Crikey ech week..