The news is still grim for Fairfax, as Rinehart flexes muscle

The Coalition has failed to deliver Fairfax better news, with no lift in advertising revenue reported at this morning's grim AGM. And Gina Rinehart has flexed her shareholding muscle. 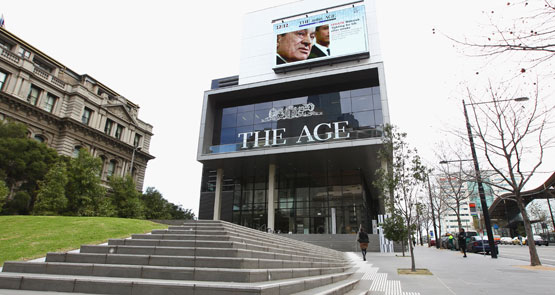 Fairfax Media has avoided a board spill after its largest shareholder, mining magnate Gina Rinehart, backed away from a “second strike” protest vote against the company’s remuneration report. But she did vote against three previous resolutions for the re-election of two directors, and against the grant of shares and options to chief executive Greg Hywood.

Rinehart’s Hancock Prospecting owns just under 15% of Fairfax and her shares were voted from the floor at today’s annual general meeting by her senior executive John Klepec, who apparently decided to abstain after the earlier protest votes fell short of the required 25% to trigger a spill, with live electronic voting underway at the meeting. The protest vote against Hywood’s pay packet was 21%.

Corbett, who pressed the wrong button and inadvertently voted against the resolution, welcomed the “outstanding result”. The remuneration report was approved by 97% of Fairfax shareholders.

Fairfax director and Rinehart ally Jack Cowin told journalists after the meeting that Rinehart “did the right thing” by abstaining from the vote on the remuneration report.

Resolutions for the re-election of Sandra Macphee and Linda Nicholls were opposed in a live vote on the floor of the meeting by a representative of Rinehart. The election was still carried with a protest vote of just under 20%. Corbett said there had been no discussions with Rinehart as to why she was opposing the re-election of the two directors.

Hywood delivered a grim trading update to the AGM, saying the post-election advertising cycle is “not proving to be robust”  and year-to-date group revenue for 2013-14 is running 6% lower than the previous year.

Hywood also revealed in Sydney this morning that Fairfax’s new “metered” paywall — introduced to The Sydney Morning Herald and The Age websites in July — had attracted 86,000 new paid subscriptions by November 4, and another 102,000 existing print subscribers had signed up for digital access.

Hywood said the Future of Fairfax transformation program was on track to deliver its $311 million in savings by 2014-15, but insisted “what we are doing is so much more than just cost reduction”. He pointed to new revenue opportunities in events — soon to be run by former Tourism Australia chief Andrew McEvoy — and “content marketing”, newsletters, webinars and so forth produced for clients to drive trials, acquisitions or customer loyalty without actually selling advertisements. He also discussed a new partnership with Hearst’s Local Edge Marketing Services which works with search engines and others to help small business boost their online presence.

Hywood said Fairfax had dominated the recently Walkley and Pacific Area Newspaper Publishers awards and the company’s journalism is “better than ever”, pointing to the royal commission into sex abuse, uncovering corruption in New South Wales, allegations of drug use at the Essendon AFL club and bribery allegations against Leighton Holdings.

Chairman Roger Corbett said the Fairfax board was “very pleased” with the appointment of Hywood as CEO, with massive changes implemented in a challenging year with a great deal of acceptance from staff — although “the business is, in terms of people, less than half what it was … [it has] cost a lot of people within Fairfax their jobs, sadly”. Corbett said recent meetings with shareholders showed support for the transformation and the shares had risen 70% since a year earlier.

Stephen Mayne from the Australian Shareholders Association questioned Corbett about the non-rotation of the company’s auditors Ernst and Young since 1992, and why directors had not bought more shares in the company to align themselves with long-suffering shareholders. Corbett holds Fairfax shares worth just $60,000, although he had taken fees of some $2.5 million over his years as chairman, Mayne said.

Mayne also asked whether the “experienced” board needed generational change given the challenges of the internet and whether Corbett intended to continue on. The former Woolworths boss wouldn’t say whether he would stand for re-election but said: “I don’t intend to stay one millisecond longer than the directors believe it’s in the interests of Fairfax.” He said his Fairfax shareholding had cost him a quarter of a million dollars but declined to discuss it further as it was a personal affair.

And Mayne questioned redundancy payments of $96 million cash in 2012-13, representing 15-20% of the value of the company, and whether this was “overly generous” to departing employees. Corbett and Hywood said the payments were made according to contractual entitlements.

A worker from the Chullora printing plant in western Sydney — which along with Tullamarine in Melbourne will be put up for sale after the company ditched the broadsheet format for its flagship metro mastheads — complained the decision was a political one.

Fairfax shares were half a cent lower after the meeting, at 57c.

I wonder if the Fairfax board realise how easy it is to avoid the paywall and that it’s almost just as easy to find the full digital version of every daily rag available online? The days of newspapers in the current form are numbered. A new business model is required that looks outside the square.

MIKEB: Perhaps the only way for printed media is to keep sweet with our Australia’s ever expanding ‘old folks’ business.

There was a time when a youngish man with ten children got the gong of ‘Father of the Year.’ But times they are a changing. Soon this ridiculous award will go to ‘Great Grand Dad’ who has had a hundred grand children, and another five hundred for the children of the grand children.

The Age deserves a better fate than the one depicted.

It is a sad state of affairs that hardly resembles “freedom of expression” that moguls like Reinhardt and Dr. Evil (Rupert Murdock) control SO much of the printed material in this nation. Money for access to influence goes further than just how they buy their politicians. It is clearly the case that in this animal farm, some of the animals are more equal than others.

JESS THRANKSON: The person responsible for Rupert Murdoch’s stranglehold on seventy-five percent of our MSM was one of my great heroes-PAUL KEATING. It was he who let this vampire from USA into our country. Yes, the b…tard was born in Oz, but changed his nationality to American in order to make more mega bucks.

On the other hand, if the Oz electorate wasn’t so lazy-and proud of it-Keating would never have succeeded in this nasty endeavour.

What is the point of mandatory voting when the average person couldn’t care less about politics? I would love to see schools having a mandatory subject in politics starting at a young age.

Silly me, I actually believe that politics run our lives; as such, it should be vital to learn about the voting process. The people who would scream the loudest against this proposition would be the Catholic church. Oh, they would do so under that marvelously catch-all heading of ‘violating an individual’s right to be free.’