Short-term stay? How tourism is propping up our export trade

Short-term overseas arrivals to Australian continued to pick up in September, giving cause for optimism on exports despite the dollar's strength. Callam Pickering of Business Spectator reports. 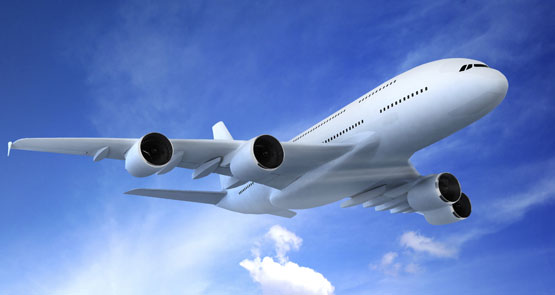 Net exports are likely to have a minimal effect on real GDP in the September quarter, but with short-term arrivals on the rise the tourism sector could soon turn around.

According to the Australian Bureau of Statistics, Australia’s trade deficit narrowed in September to $284 million; over the September quarter the deficit was $2.39 billion. This compares with a trade deficit of $2.245 billion in the June quarter. On the basis of that result, net exports are likely to have a negligible contribution to real GDP in September. 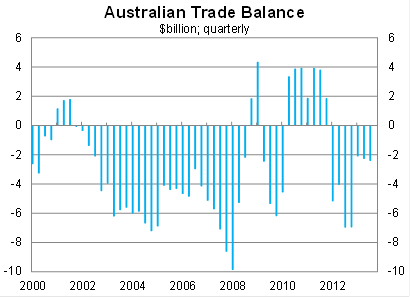 Total exports rose by 0.5% in September, while imports were down 1%. This could be due to the Australian dollar appreciating earlier in the year, which can take some time to flow through the economy, but the month-to-month movements for international trade can be particularly volatile and I would not put too much weight on it.

Merchandise exports to China are up almost 70% over the year to September and are 25% higher over the first nine months of 2013 compared with the same period in 2012. China now accounts for almost 38% of Australian merchandise exports (up from 32% at the end of 2012).

Western Australia continues to run a sizable surplus, offsetting the deficits run by Victoria and New South Wales. While for resources, iron ore exports were up by $120 million, while coal exports fell by $68 billion. 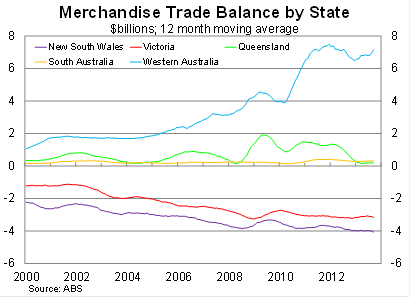 Consumption imports fell by 3% in September but were up 7.1% after strong growth in both July and August. On Monday the ABS released retail trade for the September quarter, which showed retail volumes rose by 0.7% in the September quarter. However, it appears that much of this reflected by rising imports rather than from domestic producers.

Despite the fact that the Australian dollar remains “uncomfortably high”, to quote Reserve Bank governor Glenn Stevens, the depreciation since April has made Australia more attractive to overseas travellers. 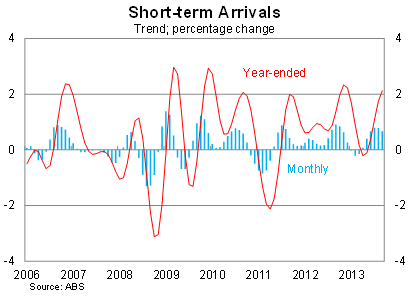 On balance, the data is reasonably positive. Although we cannot rely on net exports to boost GDP growth in the September quarter; overseas travellers are on the rise. The trade deficit may shift to surplus next year as some mining projects progress from the investment and development stage towards production, while the Australian dollar will depreciate once the Fed begins to taper. These factors will provide an environment conducive to growth in the export sector.