Are Fairfax's business reporters lining up to take redundancies, or will there be taps on the shoulder? Plus other media snippets of the day.

Fairfax redundo round down to the wire. Fairfax’s 50-strong redundancy round, caused by the merger of The Australian Financial Review, Sydney Morning Herald and Age business sections, has been extended to tomorrow, and there is speculation, contrary to some reports, that the offering has been undersubscribed. The murky wildcard is the opaque situation inside The Fin, where notoriously low union penetration means decisions on redundos have been kept hush-hush. The SMH, by contrast, is a hotbed of transparent radicalism. Could shoulder taps be on the cards? The clock is ticking. — Andrew Crook

Graeme Wood’s gravy train. Global Mail and Guardian Australia bankroller Graeme Wood is heavily in the money on today’s $15 billion Twitter Wall Street float courtesy of the sale of dud blogs and social media portal We are Hunted to the social media behemoth earlier this year. The technology, used to build Twitter’s disastrous #music app and the defunct Wotnews, might be on its last legs, but Wood and co-investor John Lyons are laughing all the way to the bank, with each set to reap millions from the IPO (“less than $10 million” in Wood’s case, according to the AFR).

Which begs the question: will Wood, worth $310 million according to BRW, plough the bounty back into journalism or sew up his bulging purse for a rainy day? He has three years left on his $3 million-a-year commitment to The Global Mail, while the extent of his large Guardian subsidy is unknown. — Andrew Crook

Wake Up started with 52,000 viewers in metro markets on Monday, but viewership fell to 39,000 on Tuesday morning, up against Sunrise‘s coverage of the early hours of Melbourne Cup day. Wake Up recovered slightly to 44,000 yesterday. Studio 10, which follows Wake Up and also started this week, had an audience of 63,000 on Monday. That fell to 45,000 on Tuesday and rose to 48,000 yesterday. The national ratings for both programs are just as weak — only 19,000 people watched Wake Up in regional markets yesterday. Studio 10‘s regional audience was even more risible, at 16,000. — Glenn Dyer

Trash to treasure: Aussie show lives on. In 2008 Network Ten made a splash with dating show Taken Out. The network pulled the massive flop after just four weeks. People couldn’t stand the vapid contestants, smug host James Kerley, or the single-episode formula. Australian audiences wanted at least the pretend character development of The Farmer Wants a Wife, The Bachelor or Beauty and the Geek. But Taken Out wasn’t a total failure; the production house behind the show — international juggernaut FremantleMedia — were naive to produce it so early in Australia. The concept hit the low-brow jackpot internationally: successfully exported to 19 countries, and none have embraced it more than China — with 50 million tuning in per episode. The Chinese hybrid goes by the English name If You Are The One.

Recut for Australia, If You Are The One is 40 minutes of blinged-out cultural kitsch, ridiculous sound effects, vulgar sets, neurotic lighting and terrible ’90s pop, and yet somehow we’re completely charmed. SBS 2 recently upped the show’s airings from one night a week to three in the prime time slot of 7.45pm; ratings are up 11%. — Ali Winters (read the full story at Wires and Lights)

Video of the day. Democrat Bill de Blasio (no doubt aided by son Dante’s impressive fro) has thoroughly trounced his Republican opponent to become the new mayor of New York City. Di Blasio will take the keys to Gracie Mansion from Michael Bloomberg, who has been mayor since 2001. In De Blasio’s victory speech (which he delivered half in Spanish) he promised a “new direction”. 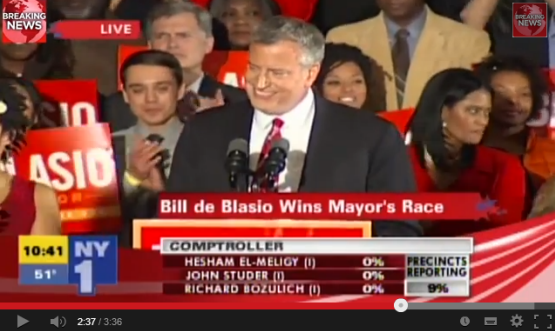 Front page of the day. The Huffington Post captured all the front pages from Canada and the delicious scandal of the crack-smoking mayor; the Toronto Sun was the best of them … 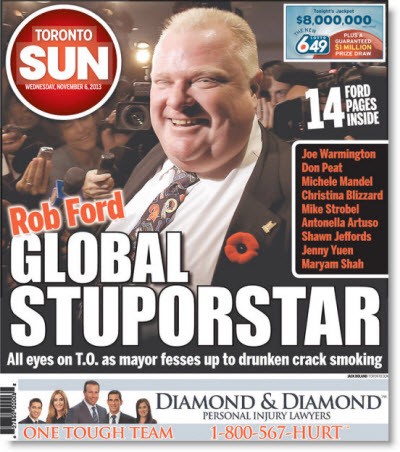