Bolt: the Left is rude and crude (just like his commenters)

Andrew Bolt has decided those on the Left need to mind their manners. We had a look at some of his commenters, and think perhaps they could use an etiquette lesson or two themselves ...

In this morning’s News Corp screed, Bolt calls out Julian Burnside QC for encouraging, via Twitter, little children to spit on Immigration Minister Scott Morrison’s shoes (Burnside has said: “Anyone who thinks the suggestion would be followed literally is missing the point: the suggestion is intended as a mark of my contempt for Morrison”). 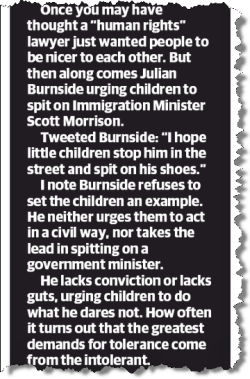 Speaking of intolerance, perhaps Bolt should issue his calls to civility to his own readers. One commenter suggested a measure a far sight more serious than spitting on someone’s shoes:

“You can start by using real bullets instead of rubber ones when faced with a ‘protest’ (read: riot) by the leftwhingers, dude. A few ounces of lead does wonders in controlling the population.”

Bolt also takes The Age to task for publishing a news photo of a sign saying “the bitch is dead” upon the death of former British prime minister Margaret Thatcher. This, after denouncing signs calling former Australian PM Julia Gillard a “witch”, is the height of hypocrisy, says Bolt. Crikey could only find a photo of a sign saying “the witch is dead” on The Age‘s site, and that in a gallery related to an opinion piece by Sydney Institute executive director Gerard Henderson that the Left should show more respect for the Iron Lady.

Whatever the language, though, Bolt thinks The Age should be more respectful to women. 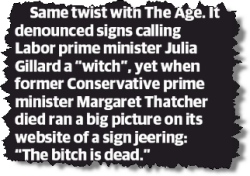 Perhaps some of his commenters should, too. Bolt wrote a short piece on his blog about Mia Freedman’s advice that women stay sober in order to avoid rape. The commenters agreed with Freedman, and then took it further:

“… if they choose to walk down a dark alley alone at 3am in the morning in a short skirt and high heels then they are just looking for trouble.”

” … If you dress like a prostitute, people will have certain expectations …”

And speaking of Gillard, here is a comment on Bolt’s blog about the Walkleys:

“Strategy of the ALP spin doctors to denigrate or
has TA wisely ignored sexual overtures from
the ‘scum of the middleclass’ especially
those of Julia Gillard who appeared to be
coming on to Abbott when they shared a
media spot some years ago during the Howard
years and on other occasions.”

Perhaps everyone could learn from Bolt’s final words in this morning’s column:

I can’t believe Dolt is the most-read columnist? He’s a hypocrite and/or just plain slack and crude when it comes to his own work.
In his sanctimonious, righteous piece he suggests in a rage that “..Yet we’ve seen ABC TV even show a picture of a conservative critic doctored to make him look as if he was having sex with a dog.”
Why is it ok for murdockians to do the same, but when ABC TV are involved, it must be ‘crude and rude’.
http://4.bp.blogspot.com/-BI_IR68e_GY/UnqrBHy8AEI/AAAAAAAAb-g/fKzw3AjbArQ/s1600/bill+leak+cartoon.jpg

It’s a bit rich coming from Andrew, who is rude, provocative, biased and a distorter of anything resembling a fact.

I once came across an article written by Mr. Bolt, which didn’t have the customary provocative style of the Bolt
Report.
I suddenly realised why Andrew writes the way he does. It’s because as a straight journalist, he’s dead boring!

Where’s Pure Poision’s Cut and Paste thread when you need it?

There is a “Bolt” in every classroom – sits up the back, sneers at the teachers, flicks the girls with spit bombs, talks constantly, too smart for his own good, and is exceedingly boring.