Racing fashion furore. All those nice pictures in the paper of pretty women and horses around racing time? Well, it’s a deadly serious business — especially when your face is worth millions of dollars.

“The feathers were flying among the fillies in the bird cage when Harris Scarfe trumped Myer in the front-page fashion war. The newly re-signed Hawko [model Jennifer Hawkins] has always been front page of Melbourne’s Herald Sun on Derby Day since joining the store. This year she was replaced by another Miss Universe Jesinta Campbell — the face of store rival Harris Scarfe. The VRC went into meltdown as did Myer chief Bernie Brookes in his last year calling the carnival shots before stepping down. The snub reportedly came right from the top of the News Limited chain with everyone whinging about Bernie’s media strategy of declining all exclusive media opportunities. It is not only News Limited who is frustrated at his approach — but the Myer media team as well.”

We’ve looked into this and yes, Hawko has failed to make the front page of the Hun in this big week of racing. On Saturday it was indeed the face of Harris Scarfe, Jesinta Campbell (top left). On Tuesday it was American model Kate Upton (top right), and on Monday it was Canadian model Coco Rocha (bottom). Today someone who actually has something to do with racing, Gai Waterhouse, made the cover (more on that later in the edition). 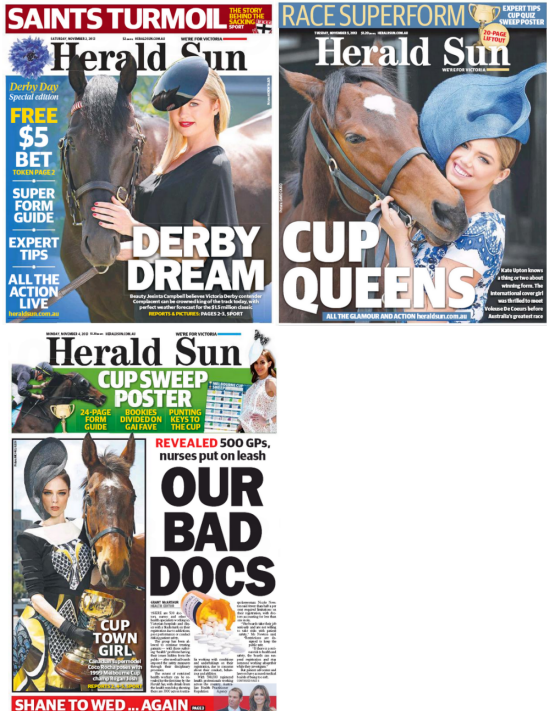 So where’s Jen? She made page seven of today’s Hun: a small pic in a red frock. That’s it for the model who recently re-signed as the face of Myer (she’ll hold the gig til late 2016, bringing up her decade with the retail giant). And don’t forget there’s this sponsorship deal between Myer and the Victoria Racing Club (though Brookes won’t see it through; he’s standing down as Myer CEO soon). Are questions being asked at Myer about the missing faces in 2013?

What’s cooking? Which celebrity chef has a little bit of a coke habit and may have been dealing? That’s the rumour in chef circles, anyway.

Time please. Which senior figure at a state parliament has been “refused service under the Responsible Service of Alcohol legislation by no less than three hotels”? This puts Ms Tips in mind of some of the memorable parliamentary parties thrown by MPs over the years, with journos sometimes allowed in. Open bar, anyone? It’s a more boring workplace now, with some of the parliamentary bars closed and young journos racing off to touch footy training after work instead of gossiping over a beer … or is it? Moles who’ve whooped it up at parliamentary functions recently should tell Tips about it.

And these guys are in government. This tweet from Liberal MP Dennis Jensen tells you everything you need to know about John Howard’s “climate change is not real” speech overnight:

Coalition staffing woes … The federal election was eight weeks ago and Parliament resumes next week — so which parliamentary secretary doesn’t have a single staff member locked in? We’re hearing plenty of grumbles from within Liberal ranks about the slow pace of recruitment — appointments have to be vetted by Peta Credlin (Tony Abbott’s chief of staff and the brains behind the throne) and party veteran/overseer Tony Nutt. The pair are taking their time, and they’re knocking back quite a few candidates put forward by MPs as staffers. Apparently some of these decisions are surprising. In addition, the powers-that-be are insisting that some candidates who do get the green light are employed at a lower level (read: lower pay) than the MPs are proposing. You can imagine what long-serving staffers think of this.

Some within Liberal ranks think Abbott’s office is exercising too much oversight, and too much control, over the rest of the party. The feeling is that this strategy worked well in opposition, but it’s now being taken too far. Resentment is brewing. And staff are being encouraged to relocate to Canberra — all the better for the PMO to keep an eye on them? So will Abbott’s henchpeople ease up on the command-and-control approach? We’ll watch with interest as Parliament resumes on Tuesday.

… but it’s not plain sailing for Labor either. A little mole tells us there are issues on the ALP side, too:

“The process for selecting opposition staff has been a debacle with many talented people still waiting to hear some news (any news!) about their future employment prospects. After receiving hundreds of applications for the sought-after positions, the party then went and opened up a general recruitment drive. Now there are as many as 700-800 applications for about 85+ jobs. The feeling was that now would be a good time to bring in new staff and promote some junior people but from what I hear, it has all been jobs for friends and most are none the wiser. Job applicants with serious credentials are being lost among a sea of applications with no end in sight. Rant over.”

We love a good rant, so don’t be shy. Email us here.

News Limited, deep in the Myer, says g’day US A-listers

Navy wishes it could turn back time over Myer stunt?