Ticked off: can you catch Lyme disease in Australia?

Are Australian ticks now infected with Lyme disease? The Citizen journalist Squirrel Main reports on a new government committee to review the evidence. 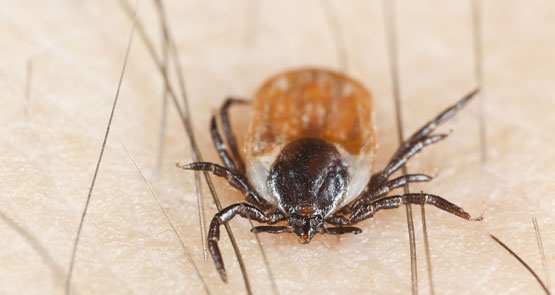 Can you catch Lyme disease in Australia? Although doctors have long said the disease is not indigenous to Australia, a newly formed government committee is sifting through the evidence.

The disease, which can be fatal, has been recognised in the United States since the 1970s, but this is the first time the Australian government has undertaken a formal examination of the evidence for indigenous Lyme disease.

Lyme disease (Lyme borreliosis) is a tick-borne bacterial infection. The infection, which can begin with a fever and bullseye-shaped rash, can be treated with antibiotics. If left untreated, it can sometimes spread to different parts of the body, causing a wide range of symptoms including neck stiffness, shooting pains from nerve damage, heartbeat irregularities and a loss of muscle tone in the face, known as Bell’s palsy. In extreme cases, it can cause death.

Many people are convinced that it can be contracted in Australia, but medical authorities have long said Australian ticks do not carry the disease.

“I was in an electric wheelchair for eight years,” said Nikki Coleman, of the Lyme Disease Association of Australia. Once she began treatment for Lyme disease, her condition improved. “I can start earning money, I can start paying tax, I can start contributing to society.”

There are no formal figures on the illness, but the Lyme Disease Association estimates there are more than 10,000 diagnosed cases in Australia. The organisation estimates that many more cases, perhaps hundreds of thousands, are undisagnosed.

But doctors, including Royal Australian College of General Practitioners’ spokesman Ronald McCoy, say not everyone with Lyme-like symptoms has Lyme disease. “I’m not saying people are lying,” McCoy said. “The college is very much evidence-based medicine, and we can only really go on the evidence we have at this time.”

Others are certain the disease exists in Australia. “We’re talking about the fastest-spreading disease in the world,” says Queensland GP Andrew Ladhams, who has been treating Lyme patients for the past nine years.

To help resolve this conflict, the Department of Health and Aging has established a clinical advisory committee on Lyme disease to provide advice on identifying the micro-organism, diagnosing Australian cases and deciding on treatment options. The committee, which has met twice, has commissioned a research study to begin next year.

In a recent letter to doctors, Chief Medical Officer Chris Baggoley told clinicians in his letter that working towards “the identification and characterisation of an indigenous causative organism” would help improve the means for diagnosing Lyme disease in Australians:

“While the investigation into an indigenous causative organism for Lyme disease continues, there is a need to raise awareness of Lyme disease as a possible diagnosis in returned travellers who may have acquired the infection whilst visiting overseas endemic areas.”

The advisory committee includes experts from public health and professional medical bodies, as well as representatives of the Australian Society for Infectious Diseases, the Lyme Disease Association of Australia and the Karl McManus Foundation, which works to raise awareness of tick-borne disease in Australia.

My mother has Lyme disease, confirmed by a blood test she had to arrange and send to the US, without support from doctors. The only reason she got to this point was months and months of inconclusive tests – Lyme disease “couldn’t exist” in Australia (even though she could have contracted it on a trip to the UK), so despite all the alternative conditions being ruled out (MS, etc) she was just told she had a virus and there was nothing they could do.

She’s now being treated, by a doctor who has to risk their reputation to provide care. But because her diagnosis took so long, there’s a chance the disease might be with her for years or the rest of her life, and she’s in frequent pain.

Being dismissed by the medical community when something’s obviously wrong is extremely distressing, demoralising and dangerous. Please, please let something conclusive and helpful come out of this new committee.

A friend was ‘lucky’ to get the bullseye rash (only about 30% of Lyme cases show that symptom) so she could fast-track the diagnosis. As with siadele’s mother, the only tests available are from the US. Getting treatment turned into a very frustrating battle with denialist doctors. The committee is welcome.

Sorry commenters, but you are plain wrong. There is no “denialism” in the medical field- there is evidence-based research. The reason why you are sending samples to the US and getting positive results is because the testing labs are shonky and the drug companies have an interest in you buying their drugs. And that goes for the Australian doctor who gave you this information, who “risked their reputation”, to provide care to you/your loved ones at great expense to you and a steady, profitable stream of patients who want a diagnosis so they can feel vindicated.
Siadele, if you mother went to UK she might well have contracted it there- but IT DOES NOT EXIST IN AUSTRALIA.
Lastly, the author deliberately confuses the reader by intimating that the committee recognises Lyme Disease exists in Australia, which it does not. It has been formed to review the evidence for it existing in Australia (if it does)- and that is mainly to pander to uninformed hysteria, a very small number of doctors who are profiting from this and internet experts.

Holmes, you don’t need to be so aggressive about it please.

I’m not saying there is or isn’t indigenous Lyme disease in Australia. That’s what the committee’s looking into.

But either way, some people in Australia are presenting with symptoms that aren’t anything else, and they aren’t being treated for it (like my mother, who could have contracted Lyme in the UK – but there’s no support for her here).

I don’t care what we call it, but we need to be constructive about this. Let’s stop just telling people who think they have Lyme that they’re merely hypochondriacs, let’s find out what’s actually making them sick, and let’s get systems in place to help them.

Lyme disease has been around for a long time it is identified and acknowledged in the UK and USA. Two of many large tourist pools on the planet. For some reason Australia is still claiming lyme diease could not possibly exist in Australia. I have watched TV programs some years ago where people claiming to be infected with this disease were pointing out they had not left Australia. I also recall reading about our government keeping pigs in pens on the Cape York Peninsula years ago. So they could test the pigs blood for the presence of mosquito/blood born diseases migrating from New Guinea like Ross River Fever which is now known way South into NSW. It is interesting we acknowledge people residing in Australia may have contracted the disease from tick bites overseas. But is the Australian government really asking us Crikey readers to accept those infected tourist over twenty or thirty years could not have passed the Lyme infection onto australian ticks and into our Australian population ? Edward James