Real ideas, at least from the Left, in pollie-free <em>Q&A</em> 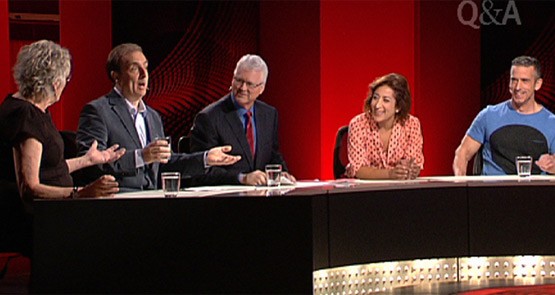 Like all Q&As, it was a process of occasional bursts of contestation surrounded by longer moments of mutual incomprehension. But as usual, the program was all the better for having no politicians on, giving out cautious blather. In this case, it was doubly advantaged by having three people — Rosin was a bit dull — with firm opinions, ready to speak their mind; Savage represented what is now a pretty standard progessivism, Greer with a more complex take — rooted, as she has said before, in Marxism, among other influences — and Hitchens representing an uncompromising religious conservatism, of the type that sees the sort of world Savage wants as something amounting to a kind of hell.

But therein lay the problem. Savage’s model of freedom and the good life as a simple multiplication of choices — connect with whomever you like, however you like, take whatever drugs you want, commit to euthanasia, have no objection to porn, etc — is, on the one hand, mostly common sense in our era. It’s also an asinine and simplistic reading of some of the cultural challenges we face, and it needed a good conservative/critical response. Greer fired a salvo for the critical response — pointing out that Savage’s idea of freedom was really consumerism transferred to everyday life, with people rather than objects as its ultimate purchase. From the look on Savage’s face, that was like teaching Spanish to dogs — this well-meaning but gormless American liberal could barely follow the argument.

But the conservative side didn’t get a look in, mainly because it was Hitchens doing it, and quickly accelerated from fairly sensible points — that if you want to see the downside of a libertarian/consumerist culture, look at the lives of the poor — to a sustained jeremiad in which liberal feminism was an alliance the “equal of the Nazi/Soviet pact”, in which he claimed that he would soon be forbidden from offering his opinion at all (he is a columnist in Britain’s Daily Mail, which has 8 million readers a day), and that the most “dangerous” idea was the divinity of Jesus Christ.

The performance was pure Hitchens, P, a man who has lived much of his life in the shadow of his late brother. Like Christopher, Hitchens was a young Trotskyist (indeed, he introduced CH to it) and then rapidly went in the other direction. So too later did CH, and although they ended in different places, the motive appears to have been the same — the search for an absolute politics with all the answers, an anti-Trotskyism, vesting faith in either Church or George W Bush.

“Add to that the blighted lives of many of the poor … and progressives have some questions to answer.”

Such a double act suggests two people for whom politics is psychology by other means, and you don’t need to go far back to find why. Papa Hitchens was a naval officer, commanding a WWII destroyer in his early 20s, and thus a figure of pretty much unmatchable gravitas and will; Mama Hitchens was a party girl and manic-depressive, highly alive and creative, who ended her life by suicide with a ne’er do well she’d run off with, in an Athens hotel room.

The family politics have been driven by those twin poles ever since — the manic need to project internal feeling onto an external world, kept in motion by a super-mensch father, whose psychic presence would not allow their egos to solidify. The sparks they have throw off through sustained lack of personal reflection have been mistaken for the illumination by all sides and corners of politics for five decades.

You saw it on Monday night. What was required for the political cause of conservatism was making the calm and reasonable point that we have a world of “freedom”, which seems to be choked by branding, consumerism, pseudo-choice, enslavement to debt (which Greer mentioned), porn, exploitation on a global scale, atomisation and a form of social media which appears to make many people lonelier and sadder each time they go on it. Add to that the blighted lives of many of the poor — cut off by powerlessness, with drugs like “ice”, poor health and other waste as the result — and progressives have some questions to answer.

But if you put it, as Hitchens P did, as if it is the end of a civilisation, rather than problems to address, and be more reflective about, if the only answer is religion then you lose the argument in wilful absurdity — and can then congratulate yourself, as Hitchens did, on not being listened to. It was a silly and egotistical performance by a man who has a greater need to be jeered than he does to be listened to.

The trouble for conservatives is that they have too many people like this — from Hitchens to Mark Steyn to Mad Lord Monckton to Melanie Phillips — who are more interested in stilling their own psychodynamics than they are in mounting a reasonable cultural conservative case. The parlous state of conservatism, its incipient and disabling hysteria, could be no better illustrated than by the fact that Germaine Greer had to do most of the heavy lifting in putting a reasonable counter view to daffy American progressivism.

Nevertheless, it was a cracking hour of actual debate. Next week, said Tony Jones, wrapping up, a panel of business leaders. Even he could not hide the dismay in his face. More of this, less of that, say the coffee lab set.

Savage was trying too hard to be confrontational with Hitch and Hitch fell for it. Surprisingly for me Greer made the most interesting observations & contributed the most. I think GR has summed up the hour pretty well, and yes, it was great TV.

A little savage on Savage Mr Rundle, but overall spot on, although come to think of it, I really don’t think that CH could be blamed for ‘sustained lack of personal reflection.’ His embrace of the war on Iraq, agree with him or not (me not) had to have been the result of many dark nights of the soul rather than reaction to Papa Ubermensch.

The other thing that occurred to me as I watched the show last night on iview is that when the discussion turns to drugs, it is always about abuse rather than use. Hands up who didn’t try cannabis in their yoof – and got over it. For every addict there are a thousand users. Peter Hitchens’ miserable view of the world – reflected in his sad hound dog face – is that once we try drugs we’re doomed to a life of misery and penury.

Well as I can attest to from personal experience it ain’t necessarily so. As the song goes (attention Peter):

How rarely we are treated to a politician-free desk and how rewarding it is when it happens. Let’s have a new criterion for Q&A panelists ie: they be articulate. That should automatically disqualify 90% of party hacks.

Savage appeared overly pushy, undermining his case by regularly interrupting Hitchins and talking over him. It’s not about who projects loudest, it’s about communicating a cogent argument.

The ABC needs to loudly proclaim the pollie free programmes as I have gotten out of the habit of watching Q&A’s pollie dominated shows with most to timid to go beyond rehearsed party lines.

The QandAs without the politicians have always been much better. The politicians from the major parties, with very few honourable exceptions, are more predictable than the sun rising in the east, repeating sanctioned talking points as if they were on the autocue. The producers should limit individual MPs to no more than 2 appearances a year and have no more than 2 on each panel, preferably with more focus on minor parties/independents. They also need to cut back on the think tank types and have actual experts on instead.

I actually haven’t watched this edition yet, but I agree with Guy that it seems difficult to find reasonable (even if I don’t agree with them) conservative arguments on many issues. There is a real lack of conservative commentators in the MSM who I would bother reading for anything other than comic relief. The only one that comes to my mind is Waleed Aly, who at least passes the laugh test and doesn’t write as a shrill for the Liberal party or some other vested interest from what I’ve seen. It probably helps that he has a genuine academic background rather than floating through the think tanks.