Australia is in the top 20% of performers among OECD countries in terms of well-being, but the GFC has had a profound effect. Plus other political snippets of the day.

Not just a matter of the GDP. A reminder this week from the Organisation for Economic Co-operation and Development that the central purpose of economic policies is to improve people’s lives. With the release of an updated version of the report How’s Life?, OECD Secretary-General Angel Gurria called for a rethink of “how to place people’s needs at the heart of policy-making” as data showed that the global economic crisis has had a profound impact on people’s well-being, reaching far beyond the loss of jobs and income.

The OECD finds that over the past 20 years, OECD countries have made considerable progress in terms of overall well-being, but progress has been uneven between countries and in some countries, across population groups too. 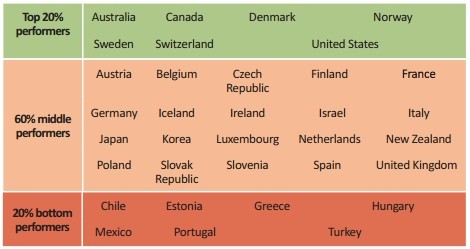 Since 2007, the crisis has had a profound impact on households’ economic well-being, as well as on people’s sense of well-being in several OECD countries. Income and wealth, jobs and earnings, subjective well-being and civic engagement are the aspects of life that have been the most aﬀected by the crisis.

Employment and labour market conditions have deteriorated markedly as measured by higher long-term unemployment, involuntary part-time work and the number of discouraged workers and inactive people. Between 2007 and 2011, employment rates fell between 5 and 10 percentage points in Iceland, Slovenia, Portugal, the United States, Estonia and Denmark, and by more than 10 percentage points in Ireland, Greece and Spain.

Subjective well-being decreased signiﬁcantly in 2009 and in 2011 in the OECD as a whole, but particularly so in euro area countries most hit by the crisis. Between 2007 and 2012, the percentage of people declaring being very satisfied with their lives fell by 25 percentage points in Greece and by around 16 and 14 percentage points in Italy and Spain respectively.

Trust in national governments and in the way democracy works declined dramatically in the majority of OECD countries. Today, in the OECD euro area, less than half of the citizens trust their governments, the lowest level since 2006.

A pure leisure transfer to the well-off. Some new opposition fodder for the debate soon to come on Prime Minister Tony Abbott’s generous paid parental leave scheme is provided by a report just published by the US government’s National Bureau of Economic Research. New research conducted jointly by economics professors in the UK, US, and Norway assessed the case for paid maternity leave, focusing on parents’ responses to a series of policy reforms in Norway that expanded paid leave from 18 to 35 weeks (without changing the length of job protection).

The summary of What Is the Case for Paid Maternity Leave? (the full paper is behind a paywall) says the more leave allowed, the more time mothers spent at home without a reduction in family income.

The second set of empirical results revealed the expansions had little effect on a wide variety of outcomes, including children’s school outcomes, parental earnings and participation in the labor market in the short or long run, completed fertility, marriage or divorce. Not only was there no evidence that each expansion in isolation had economically significant effects, but this null result held even if estimates across all expansions from 18 to 35 weeks were cumulated.

“Our third finding is that paid maternity leave is regressive in the sense that eligible mothers have higher family incomes compared to ineligible mothers or childless individuals. Within the group of eligibles, the program also pays higher amounts to mothers in wealthier families. Since there was no crowd out of unpaid leave, the extra leave benefits amounted to a pure leisure transfer, primarily to middle and upper income families.”

What climate scientists do say is that we must achieve zero emissions if we are to stabilise the climate. Any “reduced” figure they speak of is only ever a part-way mark to the necessary achievement of zero itself.