Mythbusting those tales of urban sprawl

New analysis by Chris Loader at Charting Transport shows that while Australian cities are continuing to spread outwards, they’re nevertheless getting markedly denser. He calculated the changes in population density of Australia’s main cities over the period 1991-2012 and produced a fascinating chart … Contrary to the stereotype, the density of all of Australia’s major cities increased […]

New analysis by Chris Loader at Charting Transport shows that while Australian cities are continuing to spread outwards, they’re nevertheless getting markedly denser. He calculated the changes in population density of Australia’s main cities over the period 1991-2012 and produced a fascinating chart … 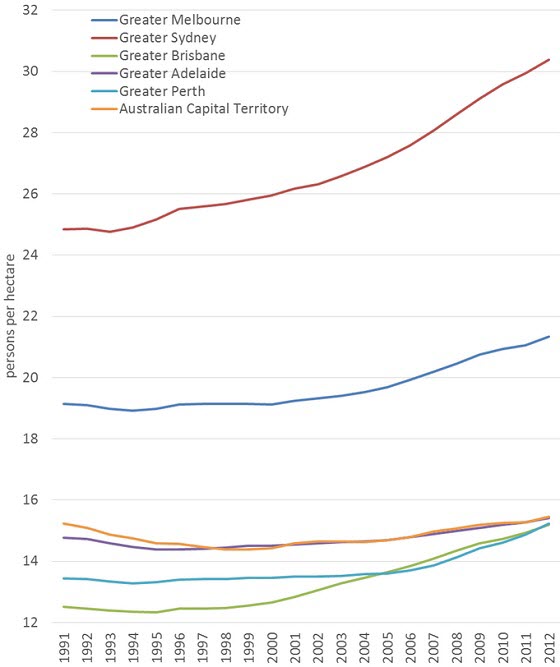 Contrary to the stereotype, the density of all of Australia’s major cities increased since the 1990s (following a period of falling density from at least 1981). The increase in Sydney and Brisbane over the last 10 years was around 15%.

As Loader notes, the rise in density was partly the result of increased infill development in established suburbs (that is, townhouses and apartments). Many outer-suburban growth areas also got denser, largely as a result of the average lot size getting smaller in response to deteriorating affordability.

He shows the convergence of the smaller capitals around 2012 at a similar density (15 persons/hectare), largely as a result of significant increases in Brisbane and Perth. Although both cities came off a low base, Brisbane certainly went through a vigorous inner-city redevelopment phase over the last 25 years.

But what stands out clearly is how much denser Sydney is than other cities; it’s clearly in a class of its own. It’s half as dense again as Melbourne and slightly more than twice as dense as Brisbane, Adelaide, Perth and the ACT.

There are a number of factors that help explain Sydney’s high density relative to its peers, ranging from its size to its unique history and the composition of its economy. Any explanation though would also need to consider the effect of Sydney’s constrained topography/geology and the impact of  infrastructure charging policies on development costs.

A study of dwelling costs by the National Housing Supply Council found it cost $561,000 to construct a typical three-bedroom house on Sydney’s fringe in 2010. That’s considerably more than the $370-384,000 it cost in the other capital cities. The cost of raw land was $152,000 on average, compared to $50-54,000 in the other cities. Further, developer contributions were in the order of $60,000 per lot higher in Sydney than elsewhere.

What’s especially important though is that the fringe house in Sydney cost slightly more than the $554,000 it cost to build a typical two-bedroom apartment in the inner suburbs (in a 5-8 storey block within 2-10 kilometres of the centre).

This pattern is reversed in the other capital cities — the typical inner-suburban apartment cost 25-42% more to build than the typical fringe house. In Melbourne, for example, the house cost $115,000 less to develop than the apartment. In Perth it costs $137,000 less and in Brisbane $156,000 less.

It’s no wonder a detached house on the fringe is a more attractive proposition in Melbourne, Brisbane, Perth and Adelaide; not only is it considerably larger than an apartment, it’s also substantially cheaper to build. A key challenge for these cities is to enhance housing choice by finding ways of reducing the high cost of constructing apartments. It’s accordingly important that large inner-suburban redevelopment sites like Brisbane’s Eagle Farm and Doomben racecourses and Melbourne’s Flemington racecourse and Alphington paper mill are able to generate economies of scale and provide large additions to the supply of multi-unit housing.

In Sydney, given the fringe offers no saving in cost, it’s not surprising that a higher proportion of residents opt for greater accessibility and accordingly demand higher densities. The challenge is to address the fact that the absolute cost of building both houses and apartments is much higher than it is in the other cities.