iSentia index: all eyes and ears on Queensland

Clive Palmer and Queensland premier Campbell Newman rocketed to the top of the charts thanks to an election win and new anti-bikie laws. 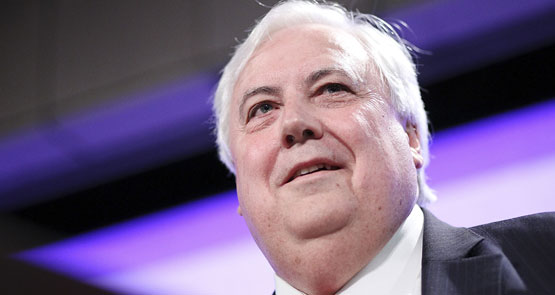 After a very long wait and a very close finish, the ascension of Clive of Coolum to Federal Parliament came very close to knocking the PM off the top spot in the iSentia Index this week, with broadcast particularly excited by the prospect of three years of great soundbites and dinosaurs as props. The government’s continuing relative silence helped, with coverage volumes well down and the press gallery starting to complain more loudly as each week passes about the lack of media engagement from ministers. Clearly the powers that be within the Liberal Party firmly believe that the government neither seen nor heard is the one likely to be least disliked. No concern about winning the “cycle” every day from this mob, and hard to argue after the last six years.

Campbell Newman up to third, thanks mainly to the bikie gang laws. This week perhaps defines a real changing of the guard in the Sunshine State (or a return to type?), with Kevin Rudd finally off the list and his fellow inner city latte type Anna Bligh long gone, Queensland politics seems to be dominated once again by tough talking blokes who aren’t too interested in foreign hooey like this “separation of powers” rubbish or greenie alarmism getting in the way of a mine or 12.

Julie Bishop jumps as the Indonesians arc up about a wee bit of friendly local spying, while the WA Senate debacle was the reason for most of the other movers on the list, with the slightly-known Scott Ludlam and even lesser-known Louise Pratt joined by Dropulich and Wang. It’s almost certain that all of them will have to take another spin of the Senate lottery wheel, with the Government desperate for the likely election to be yet another “referendum on the carbon tax”. 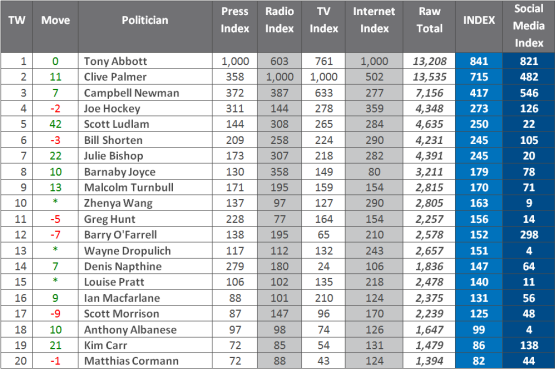 A mixed bag for the Queensland duo on talkback, plenty of fans for both of them but not quite universal praise.

Despite the rest of the media ignoring him, Tony Abbott remains by far the favourite punching bag on the microblogs — a lot of preaching to the choir…

It only took her 20 years, but Gai has finally conquered the Cup, and the Waterhouse clan clearly brought some Sydney-style partying to the southern capital last night.