A Birdcage flutter: how the boldly rich and beautiful spend Cup day

The Melbourne Cup Day carnival draws the rich and famous like no other event in Australia. Crikey snooped around the birdcage enclosure to see who was swilling champers with who.

The remarkable Spring Racing Carnival continues in Melbourne this week — a truly unique event that manages to combine celebrity, gambling, alcohol and thoroughbreds to create what has turned into one of Australia’s biggest cultural exports. Although the Melbourne Cup has fewer attendees than the Kentucky Derby or the Japan Cup (which draws more than 150,000 spectators), there is no richer week in racing anywhere than the carnival, culminating in yesterday’s $6.18 million Melbourne Cup. The scale of the prize money is significant — the entire Royal Ascot carnival, with 30 races, has a total prize money of $8.4 million.

Much credit for the event’s success (especially in recent years) is due to shrewd marketing — somehow, the carnival appeals to 18-year-old high school graduates and BRW Rich Listers alike. Of course, the circumstances in which they enjoy Flemington’s hospitality does differ somewhat.

Of all the marketing initiatives of the Victorian Racing Club, few match the growth of the Birdcage enclosure — a menagerie of celebrities, CEO, nouveau riche and MasterChef contestants. It’s hard to believe that a little over 10 years ago, the Birdcage as we know it didn’t exist. It epitomises the glamour of the carnival and has become the perfect PR anchor for the event.

The biggest presence in the Birdcage this year was once again the ubiquitous Emirates marquee — famous for its trackside balcony (it has by far the best view in the Birdcage) and plumbed toilets. While Emirates is believed to spend several million dollars annually for naming rights to the Cup and Saturday’s Stakes Day, it’s the company’s $1500-a-head-plus marquee that generates most of the publicity. There are few brands that have made such an impact in a relatively short time. Emirates’ success is such so that Qantas has (many believe shrewdly) abdicated its money-losing international business to the gulf-based carrier. The Emirates marquee in 2012 was also the scene of Australian Financial Review gossip hound Joe Aston’s infamous outing of Qantas marketing boss Olivia Wirth and union heavy Paul Howes. The power couple were back for the Cup this year.

Derby Day drew a large contingent of entertainment types, with Crikey enjoying the elaborate Middle Eastern dance routine alongside the Sunrise team of David Koch, Sam Armytage, Mark Beretta and Natalie Barr (Mel Doyle made an appearance on Cup Day), with Fifi Box, Jules Lund and Eddie McGuire also watching on. Geri Halliwell (pictured, left) mingled with guests and appeared to be getting along famously with Channel Seven personality Rob Palmer, while international model Coco Rocha was also a guest of the airline. We watched the race alongside the lovely Deborah Hutton, who picked a winner, while $10 million man Buddy Franklin looked on (sans beau Jesinta Campbell, who was practising her dance moves). 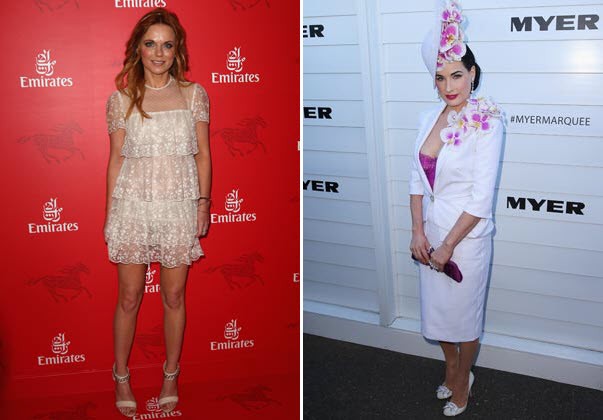 The business contingent was quieter on Derby Day, with former David Jones boss and now Solly Lew’s go-to man Mark McInnes in attendance, and James Packer popping in. Jeff Browne along with new partner Rhonda Wyllie (Australia’s second-richest woman) made an appearance for both the Cup and Derby. The Rich List was ably represented on Cup Day by Flight Centre boss Graham “Skroo” Turner and adman John Singleton, who left the Birdcage soon after the race, presumably to congratulate Gai Waterhouse on Fiorente’s win.

The Emirates marquee is also birthplace of one of Australia’s successful budding IT businesses — Lewis Romano (the 25-year-son of Emirates PR kingpin Judy Romano) devised his SpotJobs website in the marquee four years ago. The site is now Australia’s fourth-most visited jobs site, behind Seek, MyCareer and CareerOne, and has secured equity backing from the Simonds and Smorgon families.

It’s not just Emirates wining and dining the rich. The Lavazza marquee, a single-level pavilion confined to a Birdcage backwater at the rear of the enclosure, continues to draw international celebrities. Catered by Chris Lucas (of Melbourne foodie favourite Chin Chin fame), Lavazza draws a younger crowd, with fewer corporate types: former Spice Girl Mel B and DJ Roger Sanchez enjoyed the hospitality alongside Chris Judd and Alex Davis.

The Birdcage is also a handy indicator of financial health — as much for the exclusions as those present. It seems the Suisse bank account is running a little dry, with the formerly ubiquitous vitamins company quietly cutting back on its extensive marketing spend as it struggles with an American expansion (last year, Suisse dominated the Birdcage with international guest Nicole Kidman). Radek Sali’s outfit has also drastically curtailed media spending and last month reported to regulators that its 2012 profit halved from $8 million to $4 million, despite revenue almost doubling to $172 million (the company is yet to file its 2013 results).

Meanwhile, a tepid share price hasn’t stopped Bernie Brookes lavishing the hospitality in the Myer marquee (which sits alongside Emirates in Millionaire’s Row). BRW Young Rich Lister Jen Hawkins was a constant presence, having recently re-signed with the retailer for another three years for a cool $3.5 million, as was burlesque superstar Dita Von Teese (pictured, right), who made a suitably glamorous Cup Day appearance.

I appear to have stumbled and clicked on Mamamia by mistake.
WTF

Yes. And then I read the “rumour” about a celebrity chef’s cocaine habit?
Maybe it’s actually NewIdea?

I read this in the vain hope it may contain a crumb of information or a serious angle which warranted the subject being covered. No result there. Now I feel used.

Please stop it, Crikey. Take your act up a notch, not down – there’s already too much competition at the lower end.

One more nail in the Crikey coffin.

I’ll add my support to thd comments above. What rot!