One man on track today is a safer bet than anyone: Lloyd Williams owns six horses in the Melbourne Cup, including the defending champ, a long neck ahead of the other Cup rich-listers. 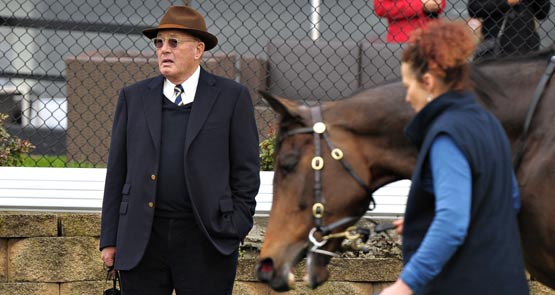 Forget kings: in Australia, racing is the sport of the very, very rich.

Most of the horses racing today at the Melbourne Cup are owned by some Rich Lister or other, and six of them are owned by the very same man.

Lloyd Williams’ Green Moon won last year’s race. And it wasn’t even a first for Williams (pictured); his horses had won three Melbourne Cups before that, and his odds of repeating that feat today aren’t bad. Green Moon is back to defend the crown this year, against other Lloyd Williams runners Sea Moon, Fawkner, Seville, Masked Marvel and Mourayan.

Williams himself is hoping for a Fawkner win, as it’s the only one of his horses bred in Australia. He told The Sydney Morning Herald yesterday:

“I love it that he’s a home bred. That would be so satisfying, to think with this race is now truly international and a horse from our country beats the rest. I raced his sire [Reset] and wouldn’t it be marvellous for him to win the Cup and show that Australia can breed and own the winner of the Melbourne Cup.”

Williams adds that if he’s bested today, he hopes a Gai Waterhouse-trained horse wins it. Waterhouse may be Australia’s most famous trainer, but she’s never trained a Melbourne Cup winner before. But Waterhouse-trained Fiorente is the 2013 cup favourite, with odds rapidly shortening to $7 this morning. Waterhouse’s son, Tom, wanted to place a $1 million bet on the horse winning this morning, but that was rejected by the bookies at Betstar.

Other horses owned by Rich Listers include John Singleton’s Dear Demi (he’s put $4 million of his own money on it winning) and Foreteller, which is owned by a conglomerate that includes by PFD Food Services chief Richard Smith and Melbourne pub king Bruce Mathieson.

Not all the horses racing today are owned by people on the Rich List. After Fiorente, the best odds are on Dandino, co-owned by 20 part-owners, including Bernie Devlin, a 55-year-old farmer who paid $4500 for his share.

“They call it the sport of kings, but it is a sport that can be shared among everyone,” Devlin told The Australian. “That is the beauty of it. You don’t have to be a millionaire to have a share in a horse like this.”

I don’t know why he does’t just go out and buy another one – and it seems the racing media are either lining up to faun over him or “St. Gai who can do no wrong”?