Why Australia should procure nuclear-powered submarines

Australia's six submarines are in poor condition and are due to be retired in 2025. Should nuclear-powered vessels replace them? Freelance writer Henry Belot finds passions running hot on both sides. 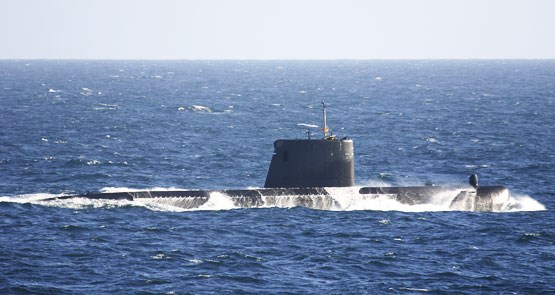 As Australia’s unreliable and ageing submarine fleet faces retirement, a leading nuclear engineering expert is urging the Abbott government to consider leasing nuclear-powered submarines from the United States. The proposal has divided politicians, military brass and the non-proliferation movement.

Stefaan Simons, director of the UCL International Energy Policy Institute, believes that developing a nuclear-powered submarine capability presents no greater challenge to Australia than developing a modified conventional fleet. He’ll outline his case in a speech in San Francisco later today. But with the exception of India, which is not a signatory of the Non-Proliferation Treaty, the acquisition of nuclear-powered submarines by a non-nuclear-weapon state like Australia would be unprecedented and steer the country into uncharted legal waters.

Simons told Crikey “a reactor could be leased to Australia, probably as part of a US Virginia Class Submarine. Hence, there is no need for Australia to have a nuclear power industry, although, of course, this could eventually be a spin-off.”

The Australian Navy is facing a looming “capability gap” and may not have a single deployable submarine once the six much-maligned Collins Class submarines, which are in poor condition, are retired in 2025. In most cases, only two or three submarines are operational at any given time. On occasion, none have been operational.

Back in 2009, the Rudd government’s defence white paper promised a dozen new conventional submarines, but Defence still remains stumped on whether to lease, procure or construct replacement subs.

Importantly, the 2013 defence white paper released by then-defence minister Stephen Smith categorically ruled out replacing the Collins Class fleet with nuclear-powered subs. But there’s been a change since then, and some within the non-proliferation movement see little to fear in nuclear submarines.

Ramesh Thakur, director of the Centre for Nuclear Non-Proliferation and Disarmament at the ANU’s Crawford School of Public Policy, told Crikey that nuclear-powered submarines make a lot of sense for Australia. “They can be at sea for much longer periods. They are a lot less noisy and can therefore be much harder to detect by enemy forces,” said Thakur.

“… acquiring a fleet of nuclear-powered subs would not and should not raise suspicions by others in the Asia-Pacific.”

But Shannon Kile, the head of the nuclear weapons project at the esteemed Stockholm International Peace Research Institute, told Crikey any acquisition of nuclear-powered submarines would create a dangerous precedent. “The spread of nuclear-powered submarines threatens to undermine or erode important arms control and non-proliferation goals,” he said. “It also complicates the already complex political and diplomatic task of negotiating a meaningful global Fissile Material Cut-Off Treaty — an important piece of unfinished business on the multilateral arms control agenda.”

Simons acknowledges that the non-proliferation treaties remain the stumbling block for any potential lease agreement with the United States. “The NPT is the major hurdle, along with the restrictions on the movement of defence materials of national security interest, but our opinion is that these hurdles can be overcome with careful diplomacy,” he said.

But should they be? The UCL International Energy Policy Institute’s green paper Could Australia’s Future Submarines be Nuclear-Powered? admits that although many nations may not be overly concerned by the transfer of nuclear material and technology to Australia and the consequent removal of International Atomic Energy Agency safeguards, “some may be concerned that this sets an undesirable precedent and implies tacit international support for such transfers generally”.

Australia’s Comprehensive Safeguards Agreement with the IAEA requires the government to inform the IAEA should it intend to use fissile material for non-explosive military purposes. Australia would have to forge new agreements with the IAEA, and accept certain conditions, to ensure safeguarding.

But Kile says the IAEA regulations around nuclear-powered subs are too lax as it is. “The rather minimal safeguards applied to uranium designated naval nuclear reactors need to be strengthened to make it easier for the IAEA to achieve a timely detection of any nuclear weapons-related use of fissile material designation for naval nuclear propulsion,” he said.

The Abbott government has not announced any aim to acquire nuclear-powered submarines. While there were some suggestions of such a policy before the federal election, then-opposition defence spokesman David Johnson rejected the idea. “Nuclear submarines are not Coalition policy and they are not on the table for us to be examining,” Johnson said before the election.

The curious case of the missing French nukes

Whatever tactical benefits might arise from nuclear powered subs we should not overlook the strategic regional implications of greater use of nuclear energy. Increasing the risk of Indonesian radicals getting their hands on the makings of a nuclear ‘dirty’ weapon seems dumb.

A bit bewildered by Mr Thakur’s reported comments. Nuclear subs are NOT quieter than conventional ones. The opposite is true. This is one of the major advantages of conventional submarines, in fact. A nuclear submarine’s reactor must operate continuously, so produces noise from water circulation pumps etc. There is no way around this. A conventional sub can shut down its engine completely in order to operate off silent batteries when stealth is at a premium. Not sure whether the error is Mr Thakur’s or Crikey’s, but this is pretty fundamental to the convenional vs nuclear debate. Nuclear subs are STRATEGICALLY better because of their range and freedom from refuelling needs. Conventional subs are tactically better because they’re quieter.

Here are some issues not considered:

Here some considerations not raised by what must rate as a very shallow article which appears to have been generated by nuclear-industry lobbying rather than by any attempt to come to a balanced view of the strategic military issues as they relate to a comparison between nuclear- and conventional powered boats. Just some of the issues not canvassed:

(1) The comparative cost of acquisition and maintenance. At just under $3 billion per unit price the Virginia class boat is much more expensive than something like the Soryu, the Type 214, or even a customized child of the Collins. Even allowing for capacity of nuclear boats to stay at sea for much longer than conventional-powered boats, the immediate result of purchasing Virgina class boats on the current ‘budget’ would be that we would be scratching to maintain at sea 2 boats at a time.

(2) The degree to which the choice between conventional and nuclear-powered ties us to third parties. In particular we lack the industry infrastructure to refuel. We would also lack all of the criticual propulsion machinery parts.

(3) We lack the necessary engineering skills. This is already a critical issue for our conventional naval maintenance. Adding nuclear-powered boats would magnify this issue enormously.

(4) We lack of the industry capacity necessary for refuelling. Apart from anything else this would tie us permanently to being fleet units of the US Navy. (Unless we purchased the nuclear-powered vessals from the Soviets).

(5) While there is a strategic issue with the life of the Collins, there is no intrinsic reason to prefer nuclear-powered vessals over conventional boats to address this issue. Apart from anything else, the article overstates this issue. Ironically, it is highly likely that Australia will draw on US expertise in extending the operational life of the Virginia Class by decades in order to stretch the operational life of the Collins Class.

(6) The ‘best’ thing by far about purchasing Virginia Class vessels would be that we would purchase them off the shelf. The horrendous tactical, strategic and fiscal risks involved in building custom boats in Adelaide would largely be avoided.

The argument that nukes are quieter is a bit dodgy, though closer to truth than it once was, but by blurring the distinction between tactical and strategic situations you run the line that nukes are less detectable because they’re not regularly running surfaced or snorkelling on diesels to actually go anywhere. Nukes have a lower “indiscretion rate”.
More generally, I’d be surprised if the Non-Proliferation treaty would allow the Yanks or Poms to casually supply us with enough weapons grade uranium to blow up a small country, even if it was sealed in a submarine reactor.

The Virginias (and the British Astutes) are intended never to be refuelled, their highly enriched uranium fuel is supposed to be good for the planned thirty year life of the submarine. The French are using much less enriched civilian reactor grade fuel in the Barracuda class, but will need to refuel every decade.
Not that there wouldn’t be other vital maintenance we have no expertise in.