Happy birthday, Mr Prime Minister … Many happy returns to Tony Abbott, who turns 56 today. That makes him a Scorpio. We’ve thoughtfully compiled some horoscopes for his big day. 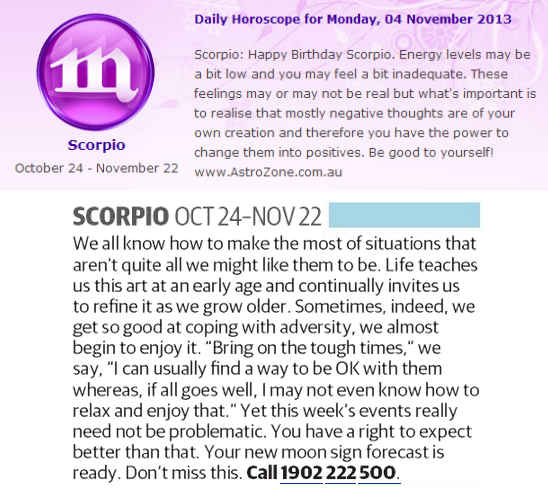 The top one we found via a link on The Age, and the bottom one is from astrological megastar Jonathan Cainer in The Daily Telegraph. We’re sorry to hear that Abbott “may feel a bit inadequate”, and can only add that he “has a right to expect better than that”. You can read a comprehensive and bizarre astrological guide (including a “natal chart“) to Tony Abbott here. Interestingly, that guide was written just before the 2010 election, and based on the stars alone, the writer tipped a confusing and close result. Maybe there’s something to astrology after all?

… and same goes for the first Dad. And Tony Abbott might have at least another 35 birthdays to come. He took time time out recently to celebrate his father Dick Abbott’s 90th birthday (you can see a family snap, courtesy of first daughter Bridget Abbott, who tweets as @bridgetabbott, here). Bridget also made sure to tag her aunt Christine Forster — who tweets using the handle @resourcefultype.

WA Liberal machinations. Any tip about WA Liberals is welcome, because it gives Ms Tips an excuse to reflect on one of her favourite pollies, Troy Buswell (that’s Treasurer Buswell to you). But sadly this snippet isn’t about the chair-sniffer …

“I am a member of the Swan division executive of the WA Liberal party. A bit of info that might be of interest to any political animals amongst your readership; Steve Irons (federal member for Swan) is looking to parachute his wife Cheryle Irons into the safe Liberal state seat of South Perth upon John McGrath’s retirement at the next election. Cheryle, recently elected to South Perth City Council, also has key factional backing. The development has angered McGrath who upon announcing his intention to retire had anointed hardworking and talented Swan division President, Andre Shannon, as his successor.”

In case this confuses you a little, these are all Libs (you can read about Cheryle and Steve here — and yes, Cheryle is on council). McGrath hit back at the rumour, saying he had not given any thought as to whether he would run again, and has not ruled it out (the next WA state election is due in 2017. There was one in March). “I certainly have given no thought to anointing a successor,” McGrath told Crikey.

Steve Irons’ office also denied the rumour. A spokesperson said “we cannot find any truth in this tip. Thank you for running it by us.” You’re welcome. Say what you will about Perth, they do have nice manners there. If you know more goss about the ascendant WA Libs, flick Tips an email.

Rupert rues News failure. Wonder who this tweet was aimed at … no prize for guessing, it’s too easy.

AEC under fire. The AEC’s processes are under scrutiny after the WA debacle, in which nearly 1400 votes went missing between the count and the recount. That stuff-up may see a fresh Senate election called for sandgropers. With that in mind, we’ve heard from someone who was counting votes for the AEC for the Senate in Victoria on federal election night. We won’t give our tipster’s name, but we’ve talked to him and yes, this is legit:

“I’m not sure I was accurate on the application form. It says nobody who is ‘politically active’ can be involved in the count. I’m a member of the Pirate Party but I’ve never attended a meeting, so does that make me active? On the Friday before the election the AEC got in touch and asked if I wanted to count votes. They did not check my referees.

On the day we all assembled to count the pre-polls. The senior AEC fulltime offical said a few words and left. People who had done it before were sent to the lower house counting area, and we newbies got the Senate. As far as I observed all the party scrutineers watched the lower house and not one bothered with the Senate.

The people in charge of the two sections on the night were casuals who had done it before but I was a little surprised that the decision on the night — obviously everything starts again on the Monday — to rule a vote in or out rested solely with these part timers. The woman who was in charge of the Senate section said she had only been contacted at the last minute to come in and head it up. She been working elsewhere since very early that morning.

Things started to get ragged, it was late and people were tired, and there was a mandatory cut-off time and once a decision was taken we were close enough to go for a completion on the night. As the time grew nearer things got a bit frantic. Mistakes were nearly made in getting the right number of ballot papers in each box. But in the end it was sorted and seemed like the number of votes that should have been there were all accounted for.

We were told to get all the below-the-line votes and summarise them on one of the ‘invalid’ ballot papers. Despite a suggestion to use one of the many Senate ballot papers that had been returned blank, a Senate ballot paper that had been marked and declared invalid was used. One of the things mentioned in the briefing was that they would err on the side of counting a vote if the intention was clear; on this particular ballot, while it was not a pristine vote, the intention was clear to me. Put that in the WA context and imagine that process was repeated at every polling place …

Was I Robinson Crusoe having a unique experience, or is this the reality of the AEC on election night? It doesn’t matter in safe seats but as we see time and again, when it’s tight and every vote is vital, is it fair to say chinks in the AEC armour are revealed?”

So from what this mole says, the AEC is not too fussy about who counts votes, people are secured for the task at the last minute, some vote-counting is rushed, some votes which are clear are ruled invalid, and there are no scrutineers at some counts to monitor the process. We’d like to hear from people who counted votes or were scrutineers on September 7 — did the processes seem fair and accurate? If there were problems, what were they and what could be done to fix them? Email us here — and don’t forget to tell us where you were and if you were associated with a political party.

I live in Western Australia, and I’m looking forward to returning to the polling booths. I always vote beneath the line. It indulges my masochistic tendencies. Numbering 1 to 62 wasn’t enough last time, I’m looking forward to at least 1 to 100. It also reflects my personal motto; why be difficult, when with a little effort I can be absolutely impossible.

I’m not certain whether electronic voting is such a good idea, particularly if the software could be manipulated (as in Andreas Eschbach’s novel ‘Ein Koenig fuer Deutschland’), to give the incorrect result.

At least with paper ballots, a recount to check the tally is possible. I doubt seriously that the votes have been lost. Just misplaced, on the wrong pile somewhere, unless they were double counted initially and didn’t actually exist in the first place.

Dear Rupert, hopefully in the long term Newscorp is heading the way of the parrot in the Monty Python skit – dead.