The Chinese reform agenda: a committee to push it forward?

There's high hopes of further economic and social reform to come from the Chinese Community Party's 18th CCP Central Committee Third Plenum. But the big calls will probably be dodged. 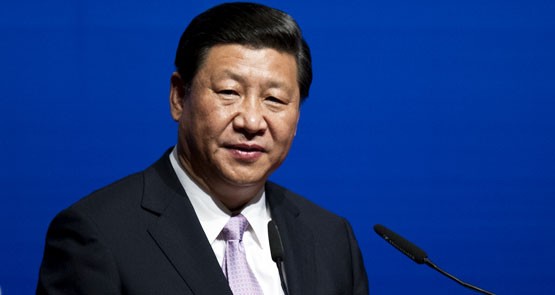 When the 16th Central Committee of the Chinese Communist Party had its Third Plenum 10 years ago, a year after Hu Jintao began his term as China’s leader, only devoted Sinologists and a handful of economists knew or cared what that mouthful of a phrase meant. Now the 18th CCP Central Committee Third Plenum, coming a year after Hu’s successor Xi Jinping took charge, and being held in Beijing for four days from this Saturday, is front-page news around the world.

It’s a world eager to see fresh changes to China’s ageing go-go growth model that will keep it (and its increasingly interdependent Asian neighbours) as the primary engine for much-needed global economic growth. Nowhere is this more important than Australia, which is now an inextricable economic cog in the region.

China’s recently retired premier Wen Jiabao was fond of describing China’s model as unbalanced and unsustainable, yet a decade of disappointing inaction by Wen and Hu has left the heavy lifting on economic reform to their successors.

In many quarters expectations are high — driven by Xi and his team — that this weekend will produce a new blueprint for reform in China. Hopes were raised two weeks ago when the Development and Research Council, the Chinese government’s top think tank, released a laundry list of reforms that would make Western economists proud, including one of the most critical that is likely to end up in the too-hard basket — the break-up of the biggest state-owned enterprises that monopolise key sectors like power, energy, telecommunications and mining.

The Party’s Third Plenum is always potentially significant, coming after China’s leaders have appointed the new team to run various bits of the party as well as China’s economy, bureaucracy and military. Its legend has been perhaps over-burnished: at the 11th Central Committee’s Third Plenum in 1978, Deng Xiaoping fired the starting gun on China’s reform that vaulted the country from a backward, impoverished agrarian nation to the position of the “world’s factory”, lifting average incomes from $200 a year to $6000. At the 14th Central Committee’s Third Plenum in 1993, Jiang Zemin began reforms that would sweep away tens of thousands of loss-making local state-owned enterprises.

The good news for those who believe Xi will deliver is that he has firmer grip on power than any leader in China since Deng. Unlike his two predecessors, he didn’t have to wait years to add the Chairman of the Central Military Commission to his main power base as CCP Secretary General and the ceremonial head of government role of president. He has publicly purged Bo Xilai, the former Politburo member who was recently incarcerated in prison for life on corruption and other charges. But the political reality of that move was to sound a warning to anti-reform conservatives.

Still, the party is not split into two neat factions — far from it. There are myriad overlapping interest groups aligned to not just ideological leanings but to industry sectors, provincial groupings and family ties, to name just a few. This has resulted in months of horse-trading in the party’s backrooms.

Xi is certainly keen to lay out his economic program, bolster his credentials and put the finishing touches on his clear desire to be Deng’s belated but natural heir.

This week, The Economist had Xi on its cover once again and summarised the broad global view on the meeting with the headline “Go on, bet the farm” and the subheading “The moment for Xi Jinping to prove that he is a reformer”. The article is about much-needed land reforms for the 600 million or so who still live in often subsistence agrarian poverty, a reform widely seen as critical to Premier Li Keqiang’s pet project of urbanisation. 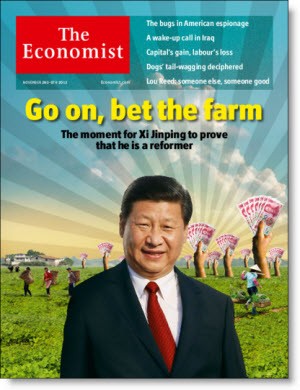 Most pundits agree that a broad range of reforms will be outlined in the all-important communique at the Plenum’s close, but in suitably vague terms, as such documents have never delved very far into detail.

Xi’s problem is that the China of 1978, or even of 1993, when Jiang introduced his own big-bang reform effort that lead to China’s admittance to the World Trade Organisation in 2001, is very different to the China of today. The torrent of cheap money and credit showered like confetti across the country by a government obsessed with GDP growth has led to an enormous mis-allocation of capital and a wealthy elite reticent to give up their slice of the pie. Billions upon billions of dollars of vanity and white elephant projects by local governments has caused debt at local levels to soar, and there is now central audit into that problem underway.

For decades now, China’s officials have been rewarded on GDP growth, which depends upon growth in credit. The leadership has recognised that this growth is too high, but still credit growth in the country shows little sign of waning; already this year it is up 20% on last year. This is in an economy growing at only 7.5%, suggesting more than half the credit growth is simply being used to roll over debt. Economists have suggested that if China is to achieve its aim of rebalancing its economy towards domestic consumption, new targets such as growth in median household income would serve it better.

But Xi’s biggest problems are that the economic constraints on China are no longer just purely “economic”. China’s fundamental problems are increasingly political — most particularly the lack of any strong institutions, especially an independent legal system.

And on this Xi shows little sign of being any sort of reformer — quite the opposite. He has repeatedly stressed the primacy of the party; China’s internet censorship is getting worse, not better; and activists continue to get rounded up and denied any fair legal process.

Foreign companies are finding it more, not less, difficult to do business in the country, according to recent surveys by the American and European Chambers of Commerce in China. The recently announced Shanghai Free Trade Zone — supposedly the centerpiece of new economic experiments — has a bewilderingly long list of businesses excluded from it.

Without addressing these issues, any program of economic reforms announced next Tuesday could just be so much tinkering around the edges of any real reform in China.