Channel Ten has two spanking new morning television shows on offer. Our fearless reporter watched both -- and wondered if the execs thought the viewers had had lobotomies. But it wasn't all tedious and lacking in news ... 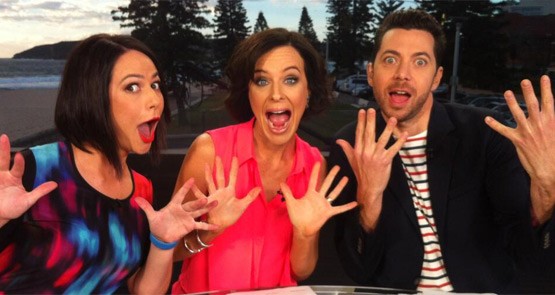 There’s a type of story here at Crikey loosely described as “we do it so you don’t have to”. In my case, this includes spending the day with Craig Thomson and going to anything organised by Max Markson.

But today we have reached a new low. With a heavy heart, I turned on Channel Ten this morning to watch three hours of the two new breakfast shows, which both had their glitzy debuts. And the verdict? Well, next time I’m given a choice on stories, I’ll take the colonoscopy.

Networks keep making breakfast TV because there’s about $100 million in advertising revenue up for grabs at that time of the day. Research indicates that most of the viewers are women, hence the deluge of ads for shampoo and diet food, because, after all, isn’t that what women are interested in?

This new program, Wake Up, which aired for the first time this morning from 6.30-8.30am, has attracted a lot of attention because Ten stuffed it up so badly last time — spending tens of millions on a program that bombed — and because the network hired executive producer Adam Boland, who steered Seven’s Sunrise to a winning position a few years ago. Boland has said he wanted it to be more like commercial FM radio than a conventional TV program.

First, the hosts. In Charlie’s Angels terms, Natasha Exelby (Tash) is the Kate Jackson role, Natarsha Belling (Tarsh) is Jaclyn Smith, and reporter (and guest tweeter) Jo Casamento is Farrah. The sole man on set, James Mathison (Matho), plays the straight man who is often the butt of their jokes.

It looked pretty good — Ten has spent squillions building a set right on Sydney’s Manly Beach, so the shoreline is the backdrop — but has anyone actually thought about content? In two whole hours of TV, there was barely any actual news, apart from the weather forecast. In fact, it seemed more like social media on the big screen.

In the first news bulletin, read by Nuala Hafner, the top three stories were the Catholic Church asking for the opinion of its bishops (cue Twitter question), a report on the possibility of a rerun of the Western Australian Senate election, and a story on the Melbourne Cup.

None of these snippets contained any interviews with anyone involved or anything that I would loosely describe as “journalism”. I know that I’m showing my age, but if I’m going to watch TV in the morning, as opposed to listening to Fran Kelly on the radio, shouldn’t I hear or see something new? Breakfast TV in the US can be meaty and entertaining, and on Seven’s Sunrise and Nine’s Today the hosts actually conduct serious interviews and cover important topics. 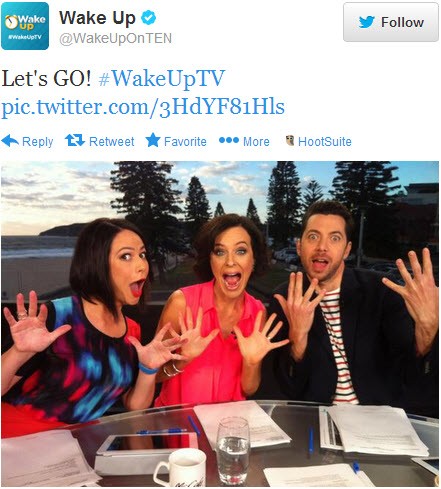 In fact, all of the stories in Wake Up’s “news bulletins” were covered in depth in this morning’s copy of the Sydney Morning Herald — which had been put to bed 10 hours earlier. Boland has boasted that they all get in at 2am — what were they doing?

It seemed more like a panel show, where a group of people saying “awesome” debated such weighty topics as whether parents should drink alcohol in front of the children, and whether women can have it all? It wasn’t too long before we got onto a discussion of female body image via a photo of “Celebrity Body After Baby”. I know commercial TV producers think women are stupid, but do they honestly think we have had lobotomies?

Whining complaint sessions about the focus on women’s appearances, usually conducted by women who have spent an hour in hair and make-up, are a classic First World Problem. Personally, I’d like the see the revival of the Society for Cutting Up Men (SCUM). If we are going to get serious about undermining the patriarchy, we may have to do something more than just moan about lipstick.

Boland, of course, is a good operator, and there are signs that he has managed to both cut costs and quell criticism by cosying up to local media groups. Casamento is the Sun Herald’s excellent social columnist (who deserves better than being forced to tweet from a McCafe), and one of the segments involved a live cross to the newsroom at News.com.au. Ten, of course, is owned by Lachlan Murdoch, so it’s never going to cop a caning from News or any of its journalists.

The highlight of the show was the announcement that it will give away $1 million dollars to a viewer. If nothing else works, that could get the ratings up.

Anyway, for some people, the fun never stops, and I stayed on the couch after 8.30am to catch Studio Ten, Ten’s new morning show, which runs til 11am. It stars Ita Buttrose, Sarah Harris, Joe Hildebrand and Jessica Rowe. I’m not sure if Stockholm syndrome had set in or it was a lack of caffeine, but I actually enjoyed it much more than Wake Up (shouldn’t there be an exclamation mark there?).

The host Sarah Harris has an appealing Katie Couric-like demeanour, and Jessica, Ita and Joe have good chemistry. Joe is genuinely amusing — hilarious at times — and the women are more than just giggling adjuncts to his jokes (which is why I can’t watch Sunrise). There was a live cross to Wendy Harmer and a plug for her successful online magazine, The Hoopla, and a very entertaining guest panellist, comedian Meshel Laurie.

Radio host Jonathan Coleman was warming up the studio audience by giving away free espresso magazines and a free copy of TV Week (more cross-promotion), but the climax of the show was when a member of the audience won a car.

All eyes will be on tomorrow morning’s ratings, which will determine whether Lachlan’s money has been well-spent on Studio Ten.

According to media site Mumbrella, Wake Up will probably attract around 75,000 viewers, although he quotes its rivals as saying the show needs 100,000 to be viable. Seven’s Sunrise and Nine’s Today tend to deliver between 300,000 and 400,000.

Personally, I can’t face watching it again, so I’ll finish on the words of critically ill Australian writer Clive James: “I won’t be buying a ticket to Switzerland so I can book into some clinic and pay people to put me into a long, deep sleep. I can get that from television here.”

Bravo Margot. You have our thanks for your valiant efforts.
I accidentally flicked on to Ten during the Studio Ten session and was momentarily confronted with Joe Hilderbrand.
It won’t happen again.

Ten has been annoying for years. If it is trying to sell advertising, it needs to first have an audience which generally likes Ten as a station. Then we may put up with a little garbage. I have four recorders, I will get more because I no longer put up with ads. Lets face it unless a viewer has a memory problem we tend to notice after having the same group of mindless commercials served up to us several times each hour over and over and over again day in day out. BTW cross media promotion and product placement is getting a bit wearing too. Edward James

A million dollars falls way short of the amount of bait required to lure me to Ten’s breakfast show.

I don’t watch any breakfast TV shows. They are all cr+p!
I’d rather listen to Fran Kelly on Radio National.

Thanks for the review. It will save me some lost hours. On the rare occasion I watch morning television, its ABC News 24 all the way for me baby