AGM season rolls on, with encouraging results across a number of key industries. 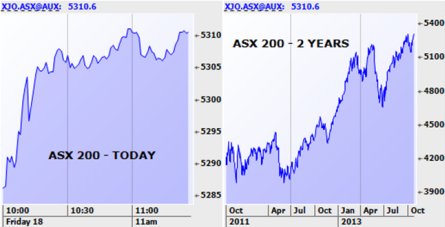 The market is up 14 points. The Dow Jones was up 70 points to 15,616. The market opened up strongly before coming back to previous close levels. It strengthened throughout the day and closed near the highs in a 100 point range.

The ISM manufacturing index rose to 56.4 in October from 56.2, compared to expectations of 55.0. The data corroborated the stronger Chicago PMI from last week which was initially seen as a bit of an outlier.

The US$ rose against most major currencies and the Aussie dollar was slightly weaker, currently trading at US$0.9445.

European share were weaker — with the exception of the UK FTSE which rose 0.05%. The French CAC fell 0.62% and the German DAX fell 0.29%. The peripheral markets were weaker.