Radio ratings: ABC Sydney in big trouble. No election chat, and blather-and-talk stations all took a hit. Nowhere was the hit hardest than with ABC702 in Sydney. The seventh radio ratings survey of 2013 ran from September 22 to October 26, so also covered the end of the NRL and AFL seasons.

Stevie Nicks’ dog’s body. Notice anything strange about Fleetwood Mac’s Stevie Nicks on the front cover of Qweekend this week? Try covering the dog’s face with your hand; notice anything now? Brisbane readers were choking on their weekend cornflakes with this rather confronting image of a dog sitting on Nicks’ lap. 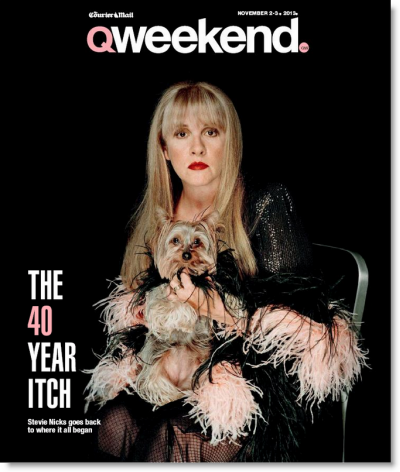 As if that weren’t enough embarrassment for the Courier-Mail‘s weekend magazine, the cover story is an interview with Nicks ahead of the band’s Australian tour — which has been cancelled. Fleetwood Mac was supposed to play in Brisbane on November 14, but the group announced on its Facebook page on Sunday, October 27 that it was cancelling its Australian tour because of bassist John McVie’s ill health. The band’s announcement came almost a full week before Qweekend hit the streets, but a Qweekend spokesperson says the issue was printed on Friday, October 25, too late to amend the article (the spokesperson also points out the Stevie Nicks film In Your Dreams will still be playing at the Brisbane International Film Festival). What a dog’s breakfast. — Cassidy Knowlton

News Corp awards its own. Who needs the Walkleys? News Corp gave out its own gongs on Friday night to journos working in its stable (and yes, Rupert Murdoch was in attendance). Broadsheet The Australian and Melbourne tabloid the Herald Sun were the leaders of the pack with five awards each, but the Hun has more to crow about, as it was named Newspaper of the Year. A full list of winners is here. No one seemed as rapt as The Daily Telegraph editor Paul Whittaker, though, who put his CEO award on page three of his paper the next day …

Video of the day. Radio France Internationale journalists Ghislaine Dupont and Claude Verlon were found murdered in Mali. Their colleagues remember them in this video …

Re the radio ratings: we don’t all live in Sydney and Melbourne! A bit of a bone thrown to at least the 3 other major markets wouldn’t be to much to ask, surely?

News Corpse Awards – like “looking into mirror while wanking”?