The federal government is wrestling with a "good money after bad" dilemma, as it decides whether to continue subsidies to Australia's car industry.

Ahead of a full productivity commission inquiry, today’s report released today by the Federal Chamber of Automotive Industries, produced by consultants Allen Consulting Group, is an opening gambit designed to show there is no bad money problem here: for about $500 million of annual public subsidy (or “investment”), the industry returns about $21.5 billion. Cut another way, $18 of subsidy per capita generates $934 of economic benefits, or $52 for every dollar of subsidy.

The $21.5 billion figure is an estimate of the economic activity that would be lost to Australia if car-making was to shut down altogether, derived from a computable general equilibrium model. These CGE models should be approached with caution; The Australia Institute has frequently criticised their use to generate vast multiples of direct investment and employment associated with an industry or project, and recently won a surprise legal victory against Rio Tinto’s proposed expansion of the Warkworth coal mine in the NSW Hunter Valley by attacking the claims of economic value-add which underpinned the cost-benefit assessment of the project.

A key trick in Allen’s modelling for the FCAI, says the institute’s Richard Denniss, is to compare the current value of federal assistance with a net present value of the future economic contribution of auto manufacture. The annual economic benefits may well be greater than the amount of the subsidy, but not by that. At best it’s “disingenous”, at worst it’s misleading.

A more fundamental criticism, he says, is that the real economy is far more complicated than the model. “This exercise shows how inappropriate and unhelpful the use of GCE models can be,” Denniss told Crikey. “The authors say the main advantages of the car industry are to do with technology transfer [to other industries, such as defence] and innovation. GCE models don’t capture those.”

In this case, however, the conclusions of Allen’s CGE modelling are not especially controversial. The FCAI report shows that withdrawal of support for local car manufacture would have a major economic impact, particularly in Melbourne and Adelaide where Toyota’s Altona and GM’s Elizabeth plants are located.

Few would dispute that finding. The Australian Manufacturing Workers Union national secretary Dave Smith warns that both Victoria and South Australia could tip into recession if car-making was to cease altogether. The real debate is whether Australia would be better off taking our medicine now.

Setting aside Allen’s modelling, the bare facts in the FCAI report is sobering. How on earth can Australia possibly compete globally, when we manufacture just 225,000 cars a year, and falling?

Production statistics for the first half of 2013 from the Paris-based International Organization of Motor Vehicle Manufacturers show of, 40 countries, Australia ranks 32nd with production of some 80,370 vehicles. In cars, that puts us ahead of Serbia, Ukraine, Egypt, Slovenia, Portugal and Austria.

We are right behind Sweden, population 10 million, which made 81,163 cars in the last six months and offers an interesting comparison. According to the FCAI, Sweden pays the heaviest subsidies to its car-makers, roughly US$334 per capita. The results are hardly encouraging. Volvo and Saab — both makers of interesting cars, with a real design philosophy — were taken over by Ford and GM respectively. Ford bailed out of Volvo in the GFC aftermath and the brand is now owned by China’s Zhejiang Geely Holding Group. GM sold Saab which subsequently declared bankruptcy, although there seems to be a rebirthing exercise underway with an all-new electric model unveiled last month. 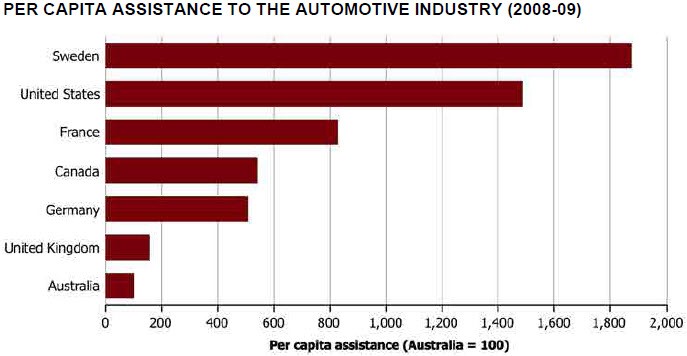 Australia withdrew protection for the industry in the 1980s, cutting tarriffs from 57% to 5%. The Button car plan rationalised models and manufacturers and for a while we competed on the world stage, with Australian car exports rising from 10% of production to over 40% between 1991 and 2007. The stubbornly high Australian dollar, courtesy of our resources boom and currency devaluation almost everywhere else, has put an end to all that. According to another scenario prepared for FCAI, the industry could generate 4100 additional jobs if we could restore car exports to pre-GFC levels over the next five years — for example, by negotiating to ease tariff restrictions on Australian cars in countries like Thailand, with whom we have a free-trade agreement. Whether that is at all realistic has as much to do with one’s view of the dollar as it does with the virtues of the Australian car industry.

So we are left with the disaster scenario: when Ford stops making the Falcon and the Territory in 2016, there will be two car-makers left in Australia, GM and Toyota. GM has announced it wants to cut the cost of manufacture by $2800 per car on average, while Toyota has nominated a figure of $3800. Neither manufacturer will identify their average manufacturing costs per car, but there are estimates of $20,000-25,000. These are very deep cuts.

To really understand the viability of local car manufacture, a figure on subsidy per car would be more useful, Denniss points out. Again, the report does not provide the figure.

The sums go like this: Australia’s car-makers are expected to made $213 million in profit in 2012-13 after soaking up government subsidies of some half a billion dollars, mainly from the $415 million under Labor’s “New Car Plan for a Greener Future”. Without subsidy, the industry would close.

We subsidise the private health insurance industry to the tune of billions every year. Why not the car industry as well? At least it generates engineering skills and employment and can generate export income. Not sure what the big, overseas health insurance companies generate.

Agree with your comments, Hood. Why can’t we subsidise our car making industry here, when just about everyone else does? And with much higher amounts of money, it would seem.
If not, I hope everyone is ready for the disaster that 40,000+ jobs lost, particularly in Vic and SA, would cause. It is all very well for those commentators and others, who usually have well paid jobs, to discard all those workers. They don’t seem to care about the human misery that kind of unemployment would cost the workers and their families. To say nothing of the effect on the greater economy, with tens of thousands of people/families having very little money to buy anything.
The retail sector thinks it is doing it tough now. Just wait for the depression to arrive, if the car industry is ever closed down. This government just doesn’t have a clue!

Given the woeful emissions and fuel economy standards of the local products, we’d get much more (or rather, less) bang for our buck if we tied subsidies to meeting some stringent goals in those areas.

Why are we only concerned with car making in Australia for Australians? Can journalist stop with the acronyms if you can’t be bothered identifying them the first time you use them! Written short hand may be OK for you. But CGE GCE GFC the last one I accept may be the Global Financial Crisis. As for the story I believe we have almost left it too late to get back to putting Australians first. Importing products is tantamount to exporting Australian jobs. Until Australia started “playing ball” with other countries we were busy mining and smelting steel for our own manufacturing industries. Australian workers were earning Australian pounds and spending them here on Australian farm produce and value added white goods. There is no way for Australians to compete with countries making cars where our days wage would employe a worker in some countries for a week if not two. Marketing consumerism, has a lot to do with our problems. Very few workers are not paying bank interest on their borrowings which they needed to be able to work of purchase a house. I believe workers have swapped an IRON collar for a fiscal collar the latter is no less onerous. Edward James

Subsidise a vehicle industry for strategic reasons but ensure that it is one suited to the future, not the 19th century internal combustion engine.
Herr Diesel never intended, nor expected, in the late 1800s that cracking oil into the more volatile petroleum would ever become feasible – his original idea was to run his engines on anything available, whales, rapeseed or slaughterhouse tallow.
A good start, and impregnable nationwide test bed, would be to electrify the entire rail network using solar arrays along the vast easements of thousands of linear miles, feeding DC into the system.
Think of every village, town or grain terminal on the blazing plains as providing their own equipment to power the “slow trains a’coming”, carrying all they need to & from the entrepots on the coast.
Then we could use our remaining oil reserves for useful purposes, plastics, feedstock, fertiliser, medicine, it has a 1001 uses instead of just one, combustion.