Rupert, Clive and Campbell in the Arkansas of the world

There's Rupert Murdoch, Clive Palmer and Campbell Newman: mildly sinister, certainly absurd. It's an Australian political implosion, and there may be no turning back. 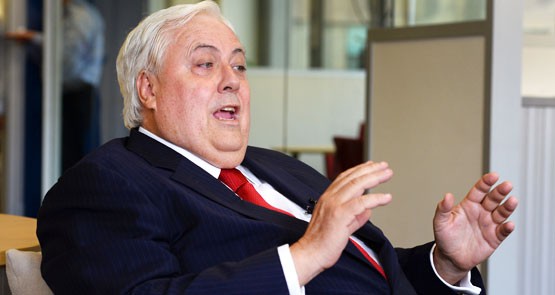 So, on a Thursday night in Australia, the proprietor of the country’s largest media outlet gives a lecture auspiced by a think tank set up by the country’s largest shopping mall magnate, which is then broadcast live and in full on ABC News 24, and breathlessly reported the next morning in all the papers.

Meanwhile in Western Australia, the Australian Electoral Commission loses some 1400 votes in a tight Senate election, which will have to be redone in very changed political circumstances … meanwhile plutocrat party starter Clive Palmer dodges questions as to whether he will use his emerging Senate control to leverage advantage for his businesses, currently in a possibly precarious state (though how would we know?), while his Tasmanian Senator-elect Jacqui Lambie — demonstrating a deep understanding of the Westminster system — calls for an inquiry into the Greens (perhaps a revival of Clive’s CIA charges).

And up north, Queensland Premier Campbell Newman, with a 60-plus seat majority, takes a problem of criminal gangs — not nothing, but hardly war in the streets — dredges up Joh-era public order laws, and imports “zero tolerance” laws from the United States — the country with among the highest crime rates, highest homicide rate and highest incarceration rate in the Western world.

History, first as tragedy, then as farce, the man said. He forgot to add … “then as a Dukes of Hazzard” episode. Boss Hogg Palmer dun got hisself a posse to find them lost votes probly stolen by some Labor-associated hack, while the governor done give the commencement address at the university and Police Chief Newman won’t let the biys ride, but the kids just want to dance man, the kids just want to dance!

What can explain the state of the nation today, this mix of the mildly sinister, with absurdity beneath it, where billionaires lecture us about elitism, and celebrate the “dynamism of capitalism” reported throughout the news organs they run at a loss of millions a week in order to have a voice?

What can explain the absurd deference to Murdoch’s mix of business magazine platitudes about the country, the world, and the nature of prosperity and the good life? What can explain the vacuum beneath, wherein — absent a major political clash — absurdities such as the Palmer United Party and the microparties can pullulate? The “surplus repression” inherent in Newman’s actions, the determination to bring in all the US problems associated with draconian law — i.e. bikies saying they will stand their ground against cops — where none currently exist here?

What can explain it above all in a country that once had a more involved and pluralist democracy, a contestation of forces that ensured that representation was not aligned with money and power? As so often in these matters, the question is the answer.

“We could have been the Germany of the Pacific. We decided to be the Arkansas. Not hopelessly backward, but a long way from the front foot, too.”

Those institutional structures fell away so quickly, were undermined so quickly — far more in the Hawke/Keating than in the Howard years; at the same time as the global economy and culture changed — that the effect was political implosion. Our union movement had always been so top-down (with honourable exceptions) that its winnowing produced no great storm of resistance.

Our great publicly owned corporations were so bureaucratic and distant from general mutual ownership and provision that few shed tears when they were privatised and then sold back to us. Superannuation and other measures profoundly privatised prosperity, and ushered in an era not merely of individualism but of atomisation. Within that, not merely Left traditions, but also classical liberal traditions died as mainstream political causes.

The result? A cautious and evasive Liberal Party, hoping to govern by stealth, a self-involved and complacent Labor Party, a Greens outfit hemmed in by the limits of its class base — and in the vacuum Clive Palmer, Rupert Murdoch, vague waffle of a Promethean nature about our great future, etc, etc. It is all nonsense, of course.

We will live better or worse depending on decisions of governments to come, but we missed the great future. We missed it these last 20 years, when we failed to plug the mineral boom into a genuinely dynamic and world-beating knowledge/science/industry/post-industry base.

While Norway builds a future fund now approaching $800 billion, we built one of $60 billion for a country five times the population. We let our schools decline, our universities rot, and we wasted the talents of a generation through complacent inequality. We gave the run of the farm to big banks, big comms, big services, and thus when ANZ makes $6 billion — $6 billion — in profit, there is no one to say that maybe they should pay a little more tax, or not charge us $2 to get our money out.

We could have been the Germany of the Pacific. We decided to be the Arkansas. Not hopelessly backward, but a long way from the front foot, too. That this fantasy creed should have been enunciated by the man who did so much to stunt our real development, on a Thursday night in Australia, is grimly amusing I guess. Morale Hazzard indeed.

What a waste of resources and chances the last 20 years has been – sacrificed on the altar of political expediency.

The ‘Future Fund’ is a vehicle to meet the government’s future liabilities for the payment of superannuation to retired civil servants of the Australian Public Service.

Norway has a sovereign wealth fund, for all of its citizens, present and future.

So well put! Murdoch embraces new technology for business because there’s a quid in it, but socially he is die-hard conservative and a conservative by definition is; a person who is reluctant to accept change and new ideas.

Great article Guy. Sums up everything that is so pathetic about Australia. But the anti science and anti future meme is not just a problem of the right wing. The Greens are also prone to some of the worst anti science thinking when it play to their very narrow ideological framework.

“a country that once had a more involved and pluralist democracy, a contestation of forces that ensured that representation was not aligned with money and power?”

Contrast this with a David Penbernathy editorial in the hun during the week praising the virtue fo Australia’s disinterst in politics and the mokcing of the “Q&A watcher”.
My thoughts were – political disinterst is only good for you David so you and your paper can keep telling the fools what to think.