There is still some life in print -- magazines that is.

Cat settles publishing case. Antony Catalano’s Metro Media Publishing has settled its long-running dispute with boutique Geelong real estate agent Hayeswinckle over alleged contract breaches and defamation. Crikey revealed in February that the brawl erupted when Hayeswinckle principal Danny Hayes was accused of welching on a deal with MMP and shifting his ads from the Weekly Review Greater Geelong to the News Corporation-owned Geelong Advertiser. In retaliation, Hayes then belled the Cat with a Supreme Court defamation writ after a series of articles and interviews appeared in the press concerning alleged diamond ring kickback shenanigans. But all that is now forgotten — Hayes took out four pages of ads in last week’s Weekly Review and both parties have agreed to the following peace statement:

“All disputes between MMP Greater Geelong Pty Ltd, the Publisher of The Weekly Review Greater Geelong, its director Antony Catalano and Geelong real estate agents Daniel Hayes and Michelle Winckle and their agency Hayeswinckle Agent have been settled. The terms of the settlement are confidential, however, as part of the settlement all legal proceedings will be discontinued with denials of liability by all involved parties. There will be no other statements made about the disputes or the settlement.”

Make of that what you will. — Andrew Crook

Bauer adds Kiwi magazines. There is still some life in print — magazines that is. German-owned Bauer Media Group has expanded deeper into magazines with the purchase of a number of New Zealand titles from APN News and Media. Under the agreement, Baurer said it had bought (subject to regulatory approval) all APN’s wholly owned magazine brands: New Zealand Woman’s Weekly, The New Zealand Listener, Simply You, Simply You Living and Crème, along with their digital properties. APN will continue to publish New Idea, That’s Life and Girlfriend magazines under licence from the Pacific Magazines Group Australia, which is part of Seven West Media. — Glenn Dyer

Shepp freezes over. Some great article placement on page four of today’s Shepparton News, with lots of different perspectives on ice. Also interesting that Antarctic explorer Rod Champness appears to be wearing a Heisenberg costume … 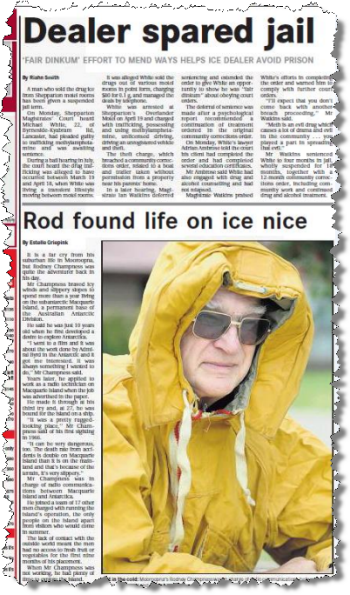 Front page of the day. London’s Daily Telegraph has put Rebekah Brooks and the News of the World phone-hacking scandal front and centre as salacious details come out in the trial. 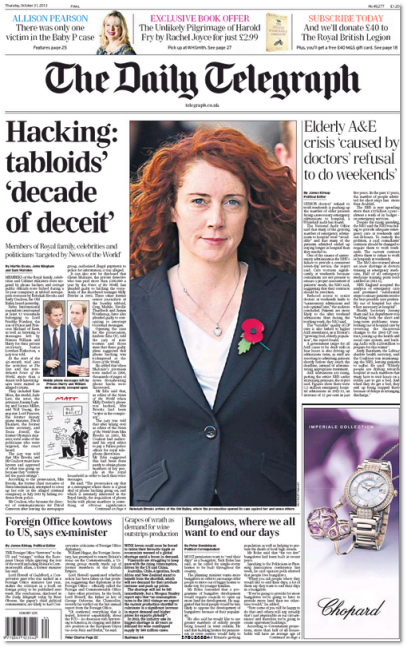 Video of the day. Egyptian cardiac surgeon and satirist Bassem Youssef is under investigation, with the country’s top prosecutor alleging he harmed the national interest by ridiculing Egypt’s military. It’s not the first clash with authorities for “Egypt’s Jon Stewart” — here he is in January talking about charges of maligning president Mohammed Morsi (we’ve found one with English subtitles) …

Funny seeing Brooks get slapped now – usually it’s the other way around?

…. imagine what Murdoch’s Limited News could have made of that line …. provided it wasn’t someone from his sanctuary involved, of course?