Dinner with Rupert and dreams of an egalitarian meritocracy

Talk about an all-star dinner. But then, Rupert Murdoch is the most powerful Australian in the world. Crikey rubbed shoulders and wondered just what the media mogul might be on about. 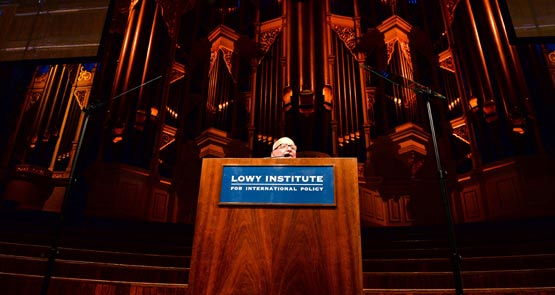 Tickets for the event cost $300 each, and quickly sold out; nabbing a spare seat was trickier than finding a pro-Labor yarn in The Daily Telegraph during the election campaign. Luckily, a friend with a table had room for Crikey. This allowed us to chow down on crispy skin mulloway and “deconstructed lemon tart” served with butter crumbs and lemon balm (surely it won’t be long until some bright spark finds a name for the iron law of dining: the longer and more elaborate the name of the dish, the blander the taste).

While the invited guests wined and dined downstairs, working journalists without a ticket were consigned to nose-bleed seats in the dress circle and only allowed in only for Murdoch’s speech. “It’s a shame they were treated as second class citizens,” sighed one attendee.

Other journalists lucky enough to score a seat downstairs were The Australian‘s Janet Albrechtsen, ABC Lateline host Emma Alberici and business media power couple Michael Stutchbury and Ticky Fullerton. Australian Financial Review gossip hound Joe Aston — looking fashion-forward in a maroon suit — was spotted on the phone talking to a Fairfax lawyer (both, presumably, have each other on speed dial). Gerard Henderson was there too, as was Sunrise host David Koch.

According to a Holt Street heavy, Murdoch has been in fine form during his visit down under: as sharp as ever and in good spirits. “It’s impossible to meet the man and not to like him,” the News insider said.

As the night continued, and the cab sav kept flowing, moving around the room became ever more enjoyable. Daily Tele editor Paul Whittaker was overheard railing against Clover Moore’s bike lanes; Col Allan and Miranda Devine were locked in discussion about how Tony Abbott had been unfairly castigated by the Left for his volunteer fire-fighting.

The official proceedings kicked off with a video spruiking the Lowy Institute. Judging by the presentation, accompanied by pounding drums and soaring strings, the think tank has solved all major geopolitical disputes of the past decade. But, hey, when you’ve got the most powerful Australian in history as your guest of honour, why talk yourself down?

After a generous introduction from institute founder and shopping centre mogul Frank Lowy, Rupert Murdoch took to the stage. Suddenly, there he was before us. The power and glory in flesh and blood. Truth be told, he looked positively tiny compared to the giant organ looming behind him. 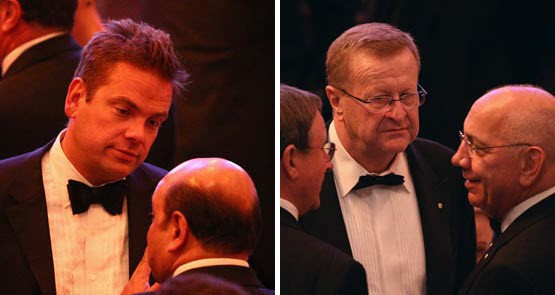 The consensus was Murdoch hit the right notes in a cleverly constructed, if cautious, speech. His message was simple:

While his tabloids may be famous for fanning conflict and stoking anxieties, this was Rupert the bridge builder, the optimist, the relentless dreamer. And a patriot too, despite ditching his Australian citizenship to buy up media assets in the US. “I’m glad he didn’t come back and pour shit on Australia,” one relieved confidant said. Not a word was uttered about the phone-hacking scandal engulfing his UK operations. At times, the contrast between the speech and the surroundings was simply surreal.

To truly prosper in the 21st century, Murdoch argued, Australia needs to focus on three areas. First: defending Australian values; rejecting elitism and snobbery — a message that went down well with the cashed-up high fliers in the crowd. Australia is well on the way, Murdoch argued, to becoming an “egalitarian meritocracy” where anyone who works hard can rise to the top. Self-made men James Packer, Lachlan Murdoch and Ryan Stokes no doubt raised a silent toast.

Third: the need to embrace the disruption inherent in capitalism. One need only look at News Corp, Murdoch said — rather than a potentially fatal blow to its business model, the company sees the growth of the internet as a “shot of adrenaline”. If you listened closely enough you could hear the ghost of ousted CEO Kim Williams howling in protest.

One of the most fascinating parts of the speech was learning about the “jaw bone” Murdoch wears on his wrist: a bracelet tracking how he eats, moves and sleeps. This allows him to take personal responsibility for his health, rather than rushing to the doctor every time he feels sick. Tonight, the mogul is off to the in-house News Awards in Brisbane; then the future beckons. Anyone banking on this 82-year-old falling off the perch any time soon better think again.

Didn’t he sell his “Australianness”?
Pity his English spear carriers, Brooks and Coulson, couldn’t make it?
But I do like his sense of humour, his irony, his self-parody and sense of the ridiculous. Then there’s his timing – did he crow about what he’s done to the UK with his NotW? Or what his patronising/sponsored politics (per the way his FUX News spins reality) way of thinking has given rise to the Tea Party and what they’ve done to the US – Pythonesque in scale?
Her he was using the occasion to slag off “elites”?
From a bloke with his media empire, with it’s virtual monopoly of msm opinion editing what we get to see in the form of “gnus” – the source the rest of the media choose to parrot without question (that way they can blame someone else, when their lack of drive leaves them short on reality?), selective as it is in what it chooses to publish – what could be more “elitist”?
He was being funny, wasn’t he?
If he wasn’t, that would be even more Pythonesque – his “Dead Parody Sketch”?

How are Lachlan Murdoch and James Packer self made men? Lachlan’s dad has bankrolled him all the way and James inherited a vast fortune.

All conmen have to sell a dream while they pick your pocket. Murdoch talking up Ozs future is him saying ‘watch the pretty birdy’ and not News Corps organised crime being prosecuted in UK. I hope he lives long enough to see jail.

Several things stand out about Rupert Murdoch in his reported speech last night.

1. His dishonesty over multiculturalism – never forget his tweet 3 weeks before the federal election to “put multiculturalism behind us” as a signal to white supremacists in the UK and Australia not least PM Abbott using his 3 white uniform daughters as props.

2. Murdoch embraces the creative destruction of economic “disruption”. This is language from climate science of “climate disruption” – about which his highest selling Sydney tabloid was so dishonest and wrong. The rag sought to airbrush the record dry and heat of September 2013 in and around Sydney leading to 200 houses destroyed and another 100 damaged, let alone all the other costs – easily $100 million plus (private and public). An abrogation of moral leadership by the Murdoch press consistent with an anti science posture in support of PM Abbott again. Exhibit 1: Relying on non expert Peter Cannon for their extreme right editorial yesterday. Truly farce.

3. Murdoch attacks lawyers and elites. According to Rupert Atticus Finch was craven elite in Harper Lee’s To Kill a Mocking Bird. Don’t buy into his emotional violence – it’s the well educated amongst us – some of the 25% for instance with higher education at uni or post grad, and in the arts, media, science, medicine and professions, very often in the inner city crucible (where ironically Murdoch’s company is based) who keep alive the bulwark against the corporate dictatorship that would have facts distorted depending on the latest tactical and strategic financial self interest. Indeed these are the main people that stand against banal evil, and speak truth to power. Lawyers in particular are trained in understanding real evidence as opposed to PR, or opinion, and for Murdoch this is like a silver arrow of truth in the heart of a vampire.

The only comment Uncle Rupert got right was the Gutenberg to Google reference.

Hi @sharman, should I have used sarcasm font?