It was the second-highest amount paid for an Australian painting. My Armchair fetched $3.2 million at auction last night -- did the Spotlight baron end up with it? Gabriella Coslovich was there for Crikey.

For such a well-plugged painting (including front-page coverage in The Age and an effusive critique by Virginia Trioli on ABC News Breakfast), the bidding for Brett Whiteley’s large, blissful, Matisse-inspired oil painting My Armchair was almost painfully slow.

Nevertheless, there was a sense of occasion at last night’s auction at millionaire businessman Rod Menzies’ prestigious South Yarra premises in Melbourne: standing room only and people spilling out the door of his first-floor gallery, crammed and craning to watch the late Whiteley’s 1976 masterpiece (pictured) go under the hammer.

Menzies’ lively head auctioneer, Martin Farrah, had to use all his cajoling skills to lift bids from the starting point of $2.7 million. There were no riveting bidding rallies evocative of the art market’s boom years and Farrah joked that his job was at risk if the painting failed to sell. But his bullish boss would have been pleased with the result.

Menzies achieved the new record he had been counting on — My Armchair sold for a hammer price of $3.2 million, or a whopping $3,927,273 once buyers’ premium was added. That’s the highest price for a Whiteley at auction and the second highest for an Australian painting overall. But the publicity hungry Menzies had only been competing against himself. My Armchair surpassed the previous record for a Whiteley, The Olgas for Ernest Giles (also known as To Ernest Giles), which sold for $3.48 million in 2007 at Menzies in Sydney.

The outstanding result gave Menzies something new to crow about last night — he is now the name behind the top three most expensive works sold at auction in Australia: Sidney Nolan’s First-Class Marksman, bought by the Art Gallery of New South Wales for $5.4 million in 2010, My Armchair, and The Olgas for Ernest Giles, famous for its multi-testicular landscape.

Many have described My Armchair as the better work. Certainly with its serene palette, featuring Tunisian blue pigment, and calming composition of Whiteley’s Lavender Bay studio-home, the large canvas is easier on the eye and spirit. But it is likely that My Armchair and The Olgas have ended up in the same collection, that of multi-millionaire Morry Fraid, co-founder of the Spotlight fabric-and-crafts chain.

The winning bid for My Armchair was placed last night by one of Melbourne’s most active and colourful art dealers, the unflappably charming John Playfoot, who last night said he had his eye on the work since “seeing it in the newspaper with Rod Menzies sitting next to it”.

“I discussed the work with family and friends and we decided to buy it,” Playfoot said. Asked to remark on the price tag, Playfoot said: “It’s only money … it’s not that expensive. I thought it might go for 3.6 or 3.8 million. We paid 3.2 million for it.” 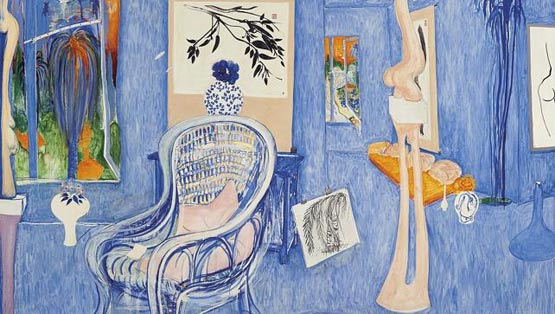 Perhaps he could afford to be blase. Playfoot was most likely bidding for Fraid, who sat next to him during the auction. The men left the auction room together immediately after the winning bid was placed; Playfoot stuck around to field questions from the media. It was also Playfoot who placed the winning bid on The Olgas back in 2007, a painting that Melbourne art world wisdom has it is owned by Fraid.

But if Playfoot had bought the work for Fraid, he wasn’t telling. “[Fraid] may end up with it but I didn’t buy for him tonight,” Playfoot said, contradicting Menzies himself who later told Crikey that Fraid had bought it.

Whiteley’s widow Wendy, who manages the late artist’s estate, was buoyed by the result. “I am relieved that people are loving Australian works again, because the current state of the art market suggests people are in doubt, they’ve been buying buildings, they’ve gone back to real estate. Hopefully this will make people feel more secure about buying art,” she said. “I hope the person who bought it will love it and enjoy it and occasionally loan it for exhibition.”

When told the owner might be Fraid, Whiteley added: “That’s good, he is obviously a Whiteley fan, he loves the work.”

No resale royalty applied to the Whiteley painting as it was the first time it had come to auction since the owners, a couple from Ivanhoe, bought the work in 1976 for $10,000 from Australian Galleries. Had the resale royalty applied, Wendy, as guardian of Whiteley’s estate, would have fetched close to $200,000. “I can’t make any comment on that because the royalty does not apply so it’s beside the point,” she told Crikey, punctuating her comment with one of her delightfully throaty laughs.

Australian Galleries’ Stuart Purves, who originally sold the painting in 1976, was thrilled by last night’s result. “It’s incredible money. It’s walk out outside your apartment and look at three houses in your street, that’s what it is,” Purves said. “I always thought it was worth $3 million and it went for nearly $4 million … it’s a remarkable picture and it’s good to see that we are beginning to understand the significance of our own culture.”

Purves says the painting’s original owners didn’t attend last night’s auction but saw the results on the news and are pleased.

Menzies is understood to have guaranteed the painting for $3 million. He also organised a strong marketing campaign — not only documenting the painting in the general auction catalogue, but creating a supplementary brochure entirely on the painting, with an essay by the University of Melbourne’s Ken Wach.

Sydney art dealer Denis Savill says it shows the market remains flat. “Even Menzies with his charm and great chardonnay could not convince people to spend. People are still gun shy. In boom years the Whiteley would have gone for $4.2 million plus buyers’ premium,” he said. “It’s tender at the moment, it’s very soft, we are dragging behind the real estate and the stock market.”

I have to say there are many Whiteleys that I would prefer to own-as if I could afford them??!!

Why did you read this story then Laura?