The union bosses are back in charge of the Labor Party, to no one's surprise. And why is jam and the traditional British breakfast under threat?

The price of privatisation. They are having quite a debate in Britain about the pricing policies of oligopolist energy suppliers. From page one of the Daily Telegraph: 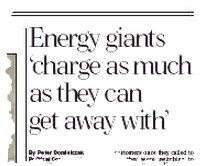 Amusing, really, to find that headline in such a newspaper bastion of free enterprise. Maybe they were just giving their readers a definition of capitalism.

Same old, same old. As they say, the more things change the more they stay the same. After the token experiment with letting ordinary members have a say in choosing the federal party leader, the trade union-based factional bosses are back in control of the Labor Party. In New South Wales there was nothing rank-and-file about choosing a successor to Bob Carr as a senator. The party executive imposed the defeated member for Robertson, Deb O’Neill, into the job after Left faction leader Senator Doug Cameron said there was no point party members nominating for the Senate vacancy because a cross-factional deal had already been struck. Hard to disagree with Shoalhaven party member Michelle Miran, who declared:

“Sussex Street is like the politburo with its shady backroom deals. Again it’s the anointed who are chosen, someone who’s lost her seat, said she wants to recontest it, and they’ve decided to give her a job for the next three years. Why bother calling for nominations if you have no intention of honouring them?”

And now its Victoria’s turn as the thoughts of the factional bosses turn to the next state election. Labor’s Victorian factions, the Age tells us this morning, are scrambling to work out a plan for vacant state seats but are keen to avoid infighting ahead of next year’s state election. And then this:

Reducing too quickly. The US Federal Reserve is continuing with its money printing as it endeavours to increase economic growth, with the Federal Open Market Committee warning overnight that “fiscal policy is restraining economic growth”. Translated, this means politician are concerned with reducing the government budget deficit and the policy of cheap money is needed to stop growth declining again.

A measure of the brakes that the Congress has put on spending was shown by the latest update from the final budget results released by the Treasury and Office of Management and Budget.

Those banking ticket clippers. As the multibillion-dollar fines for international banks keep coming over past misdeeds, new questions are arising about the way they continue to fleece their customers. The latest potential scandal appears to involve foreign currency trading, with Reuters this morning referring to a number of senior traders from several banks being sent on leave. I say “appears”, because the reason for the gardening leave has not yet been given, but Bloomberg reported that two went on leave after regulators probing foreign exchange manipulation started investigating traders’ use of an instant-message group.

The end of the British breakfast as we know it. The pressure for Britain to quit the European Union will surely grow now that officialdom in Brussels is seeking to reduce the minimum level of sugar that  a product calling itself “jam” or “marmalade” can contain. Lib Dem MP Tessa Munt argues that if the regulations change, as the government is proposing, “we’ll end up with something much more like the French and German product — and worse still the Americans, where they have things a bit like a fruit butter or a fruit spread. It’s dull colours that don’t taste the same and they certainly don’t last as long.”

She told the BBC:

“I’m actually quite worried because I think this is going to be the end of the British breakfast as we know it.

“At the minute, we’ve got a jam that we know exactly what it’s like. It’s a fantastic colour, a really good shelf life — it’s going to last a year — it’s beautiful consistency, it’s got a gloss to it.”

“First Law: It is almost impossible by rational argument to persuade people to believe what they do not want to believe. Second Law: Almost any argument, no matter how feeble, will convince people of what they do want to believe. The third law is the non-obvious one; I learned it the hard way, by making mistakes. Third Law: If you think your opponent’s position doesn’t make sense, or that he or she is stupid or uninformed or irrational, think again. Almost certainly, YOU are the one who does not understand”

Ian Dunlop: why I am nominating for the board of BHP Billiton

I’m having a bit of a problem with that 3rd law. Does it say that all the people who believe in anthropogenic climate change are wrong & all those who argue against it are also wrong?