Believe it or not, there is actual good news in the world of digital journalism.

Slap for Fairfax on executive pay. Ouch. Proxy adviser CGI Glass Lewis has given Fairfax Media a slap over its remuneration report, although it has still recommended shareholders vote for it. The proxy report notes the pay structure is fair, and disclosure and readability are good, but rates the company “poor” on the crucial measure of pay-for-performance.

CEO Greg Hywood’s total remuneration fell from $2.4 million to $2 million in 2012-13, a year in which Fairfax delivered a total shareholder return of minus 38% and hundreds of journalists took redundancy. CGI writes that Fairfax paid “more remuneration to its CEO than the media remuneration for 41 similarly-sized companies with an average enterprise value of $A1.5 billion; more than a sector group of 16 consumer discretionary companies, more than an industry group of six media companies. Overall the company paid more than its peers, but performed worse than its peers. — Paddy Manning

Financial Times‘ record profits. There is some good news in the digital world for newspapers: Financial Times overnight posted its third-quarter results, showing record circulation figures, and digital sales now exceed print sales by 150,000 a day. Total sales were 629,000 in the quarter for the 125-year-old newspaper, up 5% on the third quarter of 2012. Digital subscriptions are the driver, more than offsetting the slide in print sales. At the end of September, FT had just on 387,000 saled, up 24% on a year ago.

And Pearson, FT‘s owner, revealed that the paper has reached “profitability this year for the first time” . The FT said that ad revenues were weak in the print edition, but reported a 23% jump for mobiles ads. The luxury website and magazine called How To Spend It recorded a 41% jump in ads revenues in the nine months to September. Despite this good news, the paper remains on track for more cost-cutting in coming months as it moves to a single global edition next year, getting rid of regional versions and emphasising the website as the place where breaking news and features will appear first.

Tonight one of the other global success stories for the digital world, The New York Times, will reveal its September quarter financial data and is tipped to expand its previously announced plans to restructure the shape and cost of its digital paywall to kick-start subscription growth, which slowed sharply in the six months to June this year. — Glenn Dyer

Video of the day. Happy Halloween! Grown-up pop princess Britney Spears has recorded a video of herself narrating the opening monologue of Michael Jackson’s Thriller. It’s certainly strange, with Spears adopting a fake British accent for some of the video and ordering a pizza midway through.

Front page of the day. We’re mostly disturbed that Aussie Joe doesn’t know if his kids share his DNA. But the headline is pretty good too … 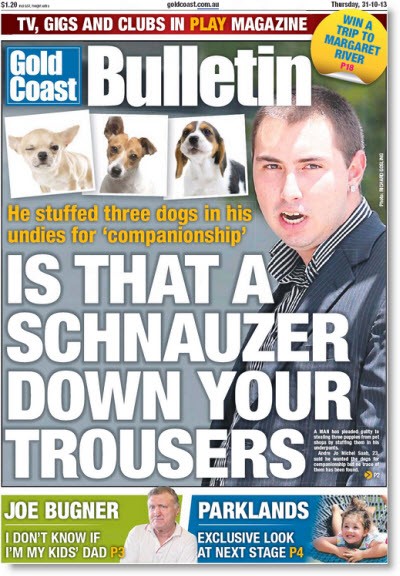 It is interesting to note how successful the FT has been with digital sales. I get both the print and the digital edition of the FT and the cost of that is substantially less than the cost of digital only for (e.g.) the AFR (I live overseas so cannot get the print). Other media now with paywalls in Australia are similarly very expensive compared to their international comparators (e.g. the Australian is more expensive than the Wall Street Journal) Clearly the FT is the more “valuable” paper to read, and at the same time from a business point of view is showing that a reasonable charge for what is a marginal (almost zero) cost of additional sales on digital is a better way forward than the extortionate prices being asked for digital subscriptions in Australia