Was Direct Action document cut down by Abbott's office? ... Democrats down in the dumps ... three cheers for the IPA ...

Just a one-pager, then? Interesting tip about the alleged curbing of enthusiasm at the office of Environment Minister Greg Hunt:

“Hunt had planned to release an ‘Issues Paper’ on Direct Action within 30 days of the Liberal government being elected. A draft issues paper was prepared and it was about 20 pages long. However, Tony Abbott’s office prevented it from being released, and insisted that the Terms of Reference for consultations on Direct Action were to be no longer than a page. These terms of reference were quietly released on 16 October, a day after the draft carbon tax repeal legislation was published.”

We’ve checked that one out, and the finished product was a document five pages long, of which the terms of reference are one page (the cover page is one, and another page is blank). We put the tip to Hunt’s office, and a spokesperson said this:

“Those claims are incorrect. The Terms of Reference were publicly released following the release of the repeal legislation, and were also provided to business groups and NGOs.”

So there you have it — our tipster reckons the document started life at about 20 pages, Hunt’s office says that’s not correct.

Seselja’s staff. Yesterday we mentioned rumbles within the ACT Liberals about the Right-moderate balance within the party, and we wondered aloud who Right-leaning Liberal Senator-elect Zed Seselja would hire as staff to go up to the hill. We heard that he might have recruited “on-again, off-again” member of the Liberal Party Sam Mullins, who declares himself “proudly Catholic” on his blog. A spokesperson from Seselja’s office said this to Crikey: “all staff employed by Senator Seselja obtained their positions based on their skills and experience. They have all gone through the standard selection processes.” The spokesperson would not confirm or deny Mullins’ appointment. We’ve tweeted Mullins to see if he’s heading up to the hill; we’ll keep you posted.

Democrats down in the dumps? The Australian Democrats have had a bit of trouble in the last few years. Yesterday a reader told us this:

“As a long time Democrats supporter I contacted both current sites in an attempt to find out how I can rebuild, I even joined the AEC-sanctioned Dems. Still no return contact, as a small-l liberal re Meg Lees, Don Chip, Turnull, I am now starting to ask if PUP party has the draw for my future support.”

Gosh, that’s quite a leap. The Dems must really be in trouble if supporters are being driven to Clive Palmer.

Newman criticised. Crikey is the first to remonstrate with our Tory friends at the Institute of Public Affairs when they reserve their celebration of liberty for when it is found among conservative pollies and media commentators. So here’s three cheers for they IPA as a spokesman criticises Queensland’s LNP Premier Campbell Newman for his draconian anti-bikie laws (click here to watch the vid). The laws certainly have a wide spread of critics … 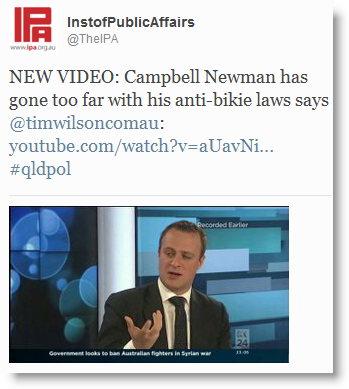