The NT News is taking Darwin's omission from Lonely Planet's 10 best cities list rather poorly. Plus other snippets of the day.

DFAT’s strange idea of transparency. “Each Trans-Pacific Partnership country has domestic arrangements for active consultation and information exchange, which will continue as the negotiation proceeds,” the Department of Foreign Affairs and Trade declared in 2011. DFAT is immensely sensitive about accusations about lack of transparency about the TPP, after protests in a number of countries about the way deals affecting intellectual property have been conducted in secret, with groups representing the copyright cartel given privileged access while consumers were left out in the cold. In July last year, the Joint Parliamentary Committee on Treaties slammed DFAT over its consultations on the Anti-Counterfeiting Trade Agreement, which the Committee — in a rare move — declined to endorse. DFAT’s lack of transparency “negated meaningful public consultation, and while stakeholders were invited to make inquiries to DFAT at any time, queries as to substantive aspects of the negotiating texts were not satisfactorily answered.”

But it seems DFAT has forgotten about both its 2011 statement and the Committee’s views, because yesterday the Department suddenly uninvited journalists Josh Taylor (ZDNet) and James Hutchinson (AFR) from attending a public briefing on the TPP this afternoon in Sydney, declaring that they should be given a “more tailored” briefing. Requests to DFAT for an explanation from Crikey and, apparently, others, have gone unanswered by DFAT’s ever-helpful media desk. Fortunately for DFAT, a number of “stakeholders” attending the briefing have said they’ll relay the outcome of DFAT’s effort at “active consultation and information exchange”.

Sore losers in Darwin. The NT News is taking Darwin’s omission from Lonely Planet‘s 10 best cities list rather poorly. The NT capital was on the list last year but has been superseded by “filth repositories” like Amsterdam and San Francisco. Even Hobart is on the list. The News consoles its readers that Darwin missed out on the list due to a technicality — Lonely Planet changes up its list every year.

News Corp’s $900m loan. The Commonwealth Bank has been kind to the Murdoch family over the years as perhaps the most supportive lender in the world for the ambitions of Rupert and his family. This morning a filing with the US Securities and Exchange Commission revealed that the Commonwealth was prepared to help lead the funding for News Corp (the newspaper, pay TV and book-publishing side of the family empire) with a revolving loan of up to $US900 million over five years. Other Australian banks are also involved in the loan as well, but the CBA is in the prized position at the top of the list, where much of the fee flow ends up.

It is the first loan arranged by the company since it was formed in the split of the Murdoch family’s empire on June 28. The documentation for the split included the idea that directors of News would load up with a half-a-billion-dollar loan once the split had settled down. So the loan announced this morning is much larger and complex than previously thought. News Corp has $US2.6 billion in cash with the expected receipt this month of the final $US240 million or so in the promised cash transfusion from associated company 21st Century Fox. — Glenn Dyer

Reuters cuts deeper into jobs. Thomson Reuters has boosted its job cuts by thousands. The Guardian reported the company has:

“… announced it would shed 3000 jobs on Tuesday as it accelerated cost cuts in its business aimed at banks and financial firms. The news and information company said most of the jobs would be lost from its financial and risk arm, which sells data terminals and other services to investment banks and brokers. The losses are on top of 1000 cuts announced earlier this year.”

Thomson Reuters said the latest round of cuts would cost it about $350 million on top of $100 million set aside for those already announced, and predicted savings of about $300 million a year by 2015. — Glenn Dyer

Front page of the day. British red-top tabloid the Daily Star has an “exclusive” interview with the ghost of Princess Diana today. Really. According to Diana’s “spiritual adviser”, the former Princess of Wales thinks her daughter-in-law is too thin. The Star‘s selling point, by the way, is that it is “cheaper than the Mirror”. 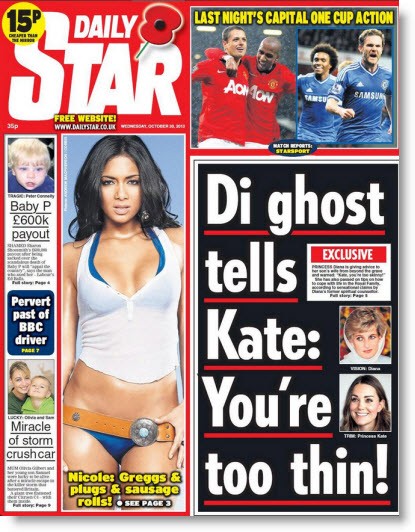 Why is the NT so attractive for US defence?

The dish that came to represent the melting pot of Darwin

Anything to do with the TPP should really be on the front page not hidden away in “Media Briefs”. It needs to in front of people as much as possible. Especially the deliberate and planned avoidance of any sort of public consultation or any sort of publicity at all. Very few people I meet are aware of the proposed terms of the treaty.

There are many, many US citizens that don’t like it either and many of their objections also apply here. These are “campaign” sites, but there’s heaps more information around.

Please keep some attention on this as it’s unlikely to get any coverage in the Murdoch media. Murdoch owned corporations and investments are amongst the major beneficiaries of this agreement should Australia be stupid enough to sign. Our current leadership has shown signs of being at least that stupid.