iSentia: Abbott front of mind in all media

For the first time since the election, we have the traditional top three of PM, Opposition Leader and Treasurer in media mentions.

The official end of Australia’s military role in the 12-year-old war in Afghanistan was the major political news this week, with the PM travelling to Oruzgan province to announce that Australia hadn’t won and hadn’t lost, an admission that things still look far from rosy for the people of Afghanistan as the country continues to suffer from tribal division and religious ultra-extremism. Meanwhile where was our new Defence Minister on the list? Absolutely nowhere.

Joe Hockey leapt nine spots to second after dumping $9 billion extra dollars into the RBA. For the first time since the election we have the traditional top three of PM, Opposition Leader and Treasurer.

In the other major issue of the week, Tony Abbott proved that even as Prime Minister, he’s still a crackingly good Opposition Leader, throwing a couple of “Electricity Bill”s at the new Opposition Leader, which was enough for Mr Shorten to creep rapidly away from blocking repeal of the carbon tax until the change in the Senate next July, when the repeal would have passed anyway. A conundrum for the Opposition, clearly wanting to “bury and cremate” any link to Julia Gillard’s tax, but at the same time looking woefully indecisive in a major policy area and giving the Greens just the boost they desperately needed.

Christopher Pyne jumped up the list by floating the idea of a privatisation of HECS debt and Bob Carr bowed out, explaining in his inimitable, postmodern way that the Gillard Government hadn’t been “cunning” enough. The kind of cunning that left the electorate with such a high regard for the NSW Labor Party after its four terms in office? 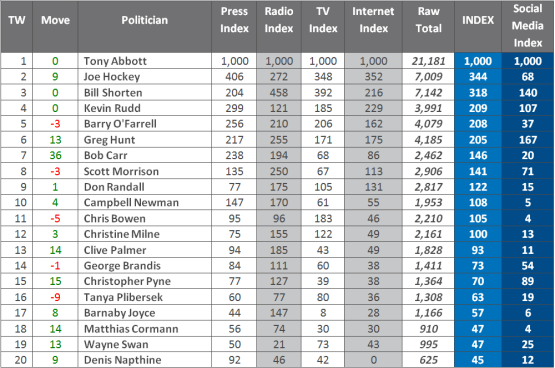 Bill Shorten pretty invisible on talkback, only getting one-seventh as many mentions as Kevin Rudd.

The online chatterers are not at all engaged by our new Treasurer, although his predecessor never made much of a splash in social either.

Punter clearly feeling a bit of relevance deprivation but getting some nice media coverage for his new book after some nasty jibes at his successor Michael Clarke.