Germaine Greer spoke in Melbourne last night without mentioning female emancipation or even women. She's now a crusading conservationist, a second-wave version of herself. Crikey was there. 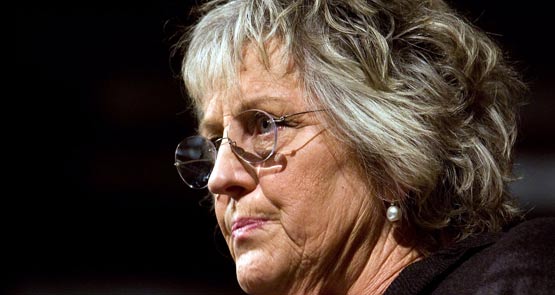 If you dream of being lectured for 90 minutes by Germaine Greer on forest regeneration and weed management, with an accompanying PowerPoint presentation of blurry photos, you’re in luck.

Australia’s most famous feminist, who forged a reputation 40 years ago for revolutionising the way many people think about gender, sex and society, is now a proselytising botanist. She’s on a green roadshow, spruiking her message to audiences around the country. Last night was Melbourne’s turn.

The author of The Female Eunuch made no reference to female emancipation, social organisation or indeed women, beyond announcing she would not take the first audience question from a man.

Instead, she talked about her rainforest regeneration project on a property she owns in south-east Queensland, in a speech book-ended by passionate applause (Greer beamed and blew kisses to the crowd). It was part gardening lecture, part home slideshow, and felt at times like a fundraiser. Only after the gruelling PowerPoint did Greer elevate her speech to the ideological, mounting an original and powerful case for a rethink of conservation in Australia.

Greer bought the former dairy farm of Cave Creek in 2001 and has spent millions trying to return it to something closer to its original state (she still lives in the UK but spends a fair bit of time in Queensland). Her most recent book, White Beech, covers this mission — there’s an edited extract here.

She wants others to follow suit and help regenerate a very damaged Australian landscape. To that end, speaking to hundreds of people at the 1920s-era Capitol Theatre last night, she gave detailed instructions on species choice, propagation, sheds, weeds, fire, her love of pythons, etc.

Greer was knowledgeable, brusque and uncompromising. Sample quotes were: “those of you who deal in regeneration will be wondering, how does she cope with predation by macropods?” (certainly not something this audience member had ever wondered) and “we have to take a different attitude to road verges”.

“You can’t really hug a tree … you are likely to end up with something nasty in your cleavage.”

Greer, a self-described anarchist who made her name urging women to shake off the confines of a masculine world and find their own will, now makes botanical puns. When an audience member gently asked about her transformation from feminist to conservationist, she replied, “it’s the same old Germaine”. She has written on gardening and botanical matters since the 1970s, although this has been much more evident in the UK than in Australia. Greer is an interesting example of a public intellectual shifting her focus away from the subjects which made her famous. She’s a second-wave feminist who is now a second-wave (or third-wave, or fourth-wave) version of herself.

And why should others join Greer’s botanical crusade? Regenerating natural systems is “so exciting, and so heartwarming,” she said; it can “ease your heartache” about the ecological devastation that surrounds us. But she cautioned against sentimentalising nature: “You can’t really hug a tree … you are likely to end up with something nasty in your cleavage.”

As she sees it, there is “a lack of commitment to conservation in our country”. Governments are more of a hindrance than a help, she argues. “We can’t leave it to them, we’re going to have to do it ourselves … The thing about the government is you’ll be given everything except help.”

Greer also called for the professionalisation of the conservation sector, saying it is too reliant on volunteers and there is little career progression for those trained in the sector. Conservation workers should be treated like doctors and engineers, she said, to cheers from the audience.

Clad in black with a grey shawl tossed over her shoulder, Greer, who is in her 70s, was bossy, blunt, and at times very funny. Her ability to turn a phrase is impressive and her apparent lack of inhibitions runs unchecked.

She recently sold her archives — more than 150 filing cabinets of letters, video, audio and papers — to her alma mater, Melbourne University. The sale was, she reflected (in a parallel admirably in keeping with her biological theme), rather like a blowfly giving up its abdomen. She could continue to live, but not fully. She can go on, but without her archive, “can’t properly shit”.

Germaine is in ripping form – should do a World According To Greer ( Greer Street ? ) doco. Can’t believe she kept her Melb Uni lecture notes !! Mucho respeto.

She’s bloody marvellous. One way or another, her book had a big hand in changing my life in 1970.

Now I can’t help comparing her current project to many women’s propensity to turn to gardening as salvation later in life.

As is her wont, Germaine has made her “gardening” into a master intellectual project that encompasses issues of huge relevance to us all.

IIRC she at one stage wrote a satirical gardening column in Private Eye.

It was a sad loss when she ceased writing her “gardening” column as Rose Blight in Private Eye.
GO, GERM!