Liberal goss. The Liberals’ Zed Seselja is a Senator-elect who will take his place in Parliament next month (instead of waiting until July) because he’s from the ACT. He may be on the brink of entering the red chamber, but he;s kept pretty quiet since the election. Meanwhile, rumours continue to rumble around the ACT Liberals about the contested process in which Seselja ousted sitting Liberal senator Gary Humphries in preselection. Some party members are unhappy with what they see as a Right takeover of the ACT Libs (in the country’s most progressive jurisdiction — see gay marriage). Which staff will Seselja take with him to the hill? If you’ve got the inside story, send us an email.

Tales from Sydney property market #1. Is this the property deal that tells us the Sydney property market has become overheated? Five square metres of an industrial development (about six years old) in the Blacktown area was sold recently for around $95,000. There’s a bank ATM on the site and a small shopping area nearby. The ATM has been there since the building opened. The investor will get a good return from leasing the five square metres to the bank — the investor has to pay rates (but no water) and other charges. The five square metres is Torrens Title.

So what does that value equate to when compared to houses in the Blacktown area of western Sydney? The average house sold in the area is roughly 200 square metres. If the five square metres were used as a valuation, the average house would be more than $3.5 million — instead it’s between $500,000 and $700,000 depending on size, age and location.

Tales from Sydney property market #2. Around six weeks ago, a house sold in the Strathfield area of Sydney’s inner west for $5 million — $1.5 million above reserve. The buyers were Chinese. Smart heads in the property market point out that if you buy property for $5 million or more in Australia you get a free visa; that’s also why there’s bulk buying of apartments. Property people reckon this is the real investor buying, and self-managed funds, which are increasingly active, are competing with these offshore investors and squeezing out local owner-occupiers. That’s also why auction clearances in Sydney and Melbourne are rising and topped 80% last Saturday.

West winds. Last week we asked Crikey readers to confirm whether Clive Palmer and Labor were flying scrutineers to Perth for the Senate recount to decide Greens Senator Scott Ludlam’s future. An anonymous tipster can now “categorically confirm that the ALP hasn’t flown in anyone from interstate, and the Greens have”. Apparently “it’s pretty full-on in there”.

Why Parliament should turn out the lights. Bogong moths haven’t left Canberra after nearly three weeks in town. This morning’s tweet from ABC journo Sabra Lane shows the moths are hanging around … 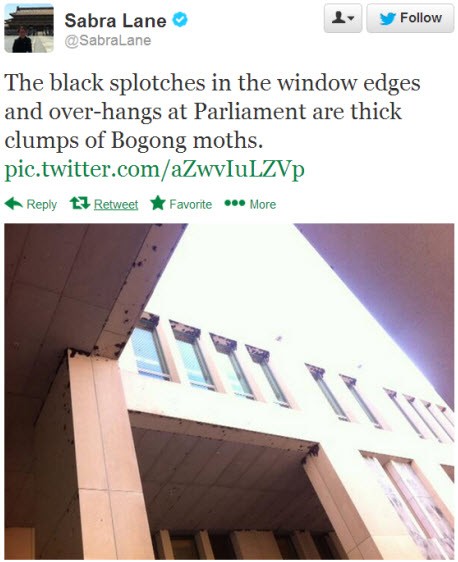 Bogong expert (and CSIRO fellow) Ted Edwards told Crikey that the moths travelling through at night were being stopped by the lights of Parliament House. “If you switch the lights off from 2am to 5am it would let that day’s moths move through,” said Edwards. Although there are many more moths than last year, Edwards said “there’s a constant procession going through that will finish pretty soon”. Until then, Canberra’s mottephobes will just have to wait it out.

So, what does a bank pay per annum for the lease on an ATM site?

Comparing a small commercial site with a viable lease arrangement of that nature to residential properties that probably won’t support an ATM on every 5 square metres, is pretty much like comparing apples to cheese.

But I am curious as to what the return would be on an ATM site in that type of circumstance.