The Daily Telegraph's Miranda Devine and The Australian's Nick Cater both have the same "exclusive" story today, on the Australian War Memorial -- but Devine and Cater's work usually appears in the op-ed section rather than the news pages.

Devine timing on war memorial. How very curious. The Daily Telegraph‘s Miranda Devine and The Australian‘s Nick Cater both have the same “exclusive” story today: the Australian War Memorial, led by former Coalition defence minister Brendan Nelson, has scrapped a plan to remove the words “known unto God” from the tomb of the Unknown Soldier. The phrase was to have been replaced by a quote from former prime minister Paul Keating, but the Abbott government overruled the War Memorial council’s decision. Devine and Cater’s work usually appears in the op-ed section rather than the news pages, making the stories even more intriguing.

Oz lobbies for ABC review. Still on The Australian, the paper takes an almighty swing at the ABC today in its editorial. The paper blasts the ABC for recent news judgments — including Four Corners‘ dramatic live cattle episode and a lack of coverage of the Julia Gillard/AWU affair. “Perhaps the ABC doesn’t get enough practice making editorial judgments because it has such a poor record in breaking stories — save for those spoon-fed by unions or environmental and animal rights activists,” thunders the Oz. “With vast resources and annual public funding of more than $1 billion, the ABC fails to break as many significant stories in a year as this newspaper does in a week.” The paper then calls for the Abbott government to review the ABC’s “reach, role, funding and internal leadership”.

The ABC’s corporate affairs boss Michael Millett has already fired back at the Oz in a letter to the editor. It’ll surely get a run in tomorrow’s paper, but here it is in full:

“The Australian‘s latest editorial on the ABC (October 29) exhorts the national broadcaster to display Australian nationalism, open-mindedness, curiosity, plurality and fair-minded debate. What the editorial doesn’t mention is that in the past week the ABC has: broadcast the lost masterpiece documentary on the Opera House, started a landmark series on Australian art with Ed Capon, educated a nation on brain nureoplasty with Todd Sampson, launched a new triple J radio service to promote Australian music and better serve audiences, broken audience records for iview through Chris Lilley, provided a forum for a debate on gender in the media at the Olle lecture, raised half a million dollars for Syria, delivered outstanding bushfire coverage for days on end and broke major stories including the shutdown of Operation Puma in Melbourne and another instance of scientific fraud, this time regarding research into heart disease.

“It also fails to mention that Federal Parliament this year unanimously voted in favour of updating the ABC Charter to recognise the importance and popularity of its on-line services. Ultimately, the audience decides if the ABC is doing its job properly, not the editorial writers at The Australian.”

Newspaper page of the day. It wasn’t on the front page, but the newspaper of New York’s counterculture, the Village Voice, has republished its 1967 review of the first album by Velvet Underground (frontman Lou Reed died this week). Even the finger-on-the-pulse Voice didn’t think the band was worth more than two paragraphs on page 19. The review begins: “The Velvet Underground is not an easy group to like …” 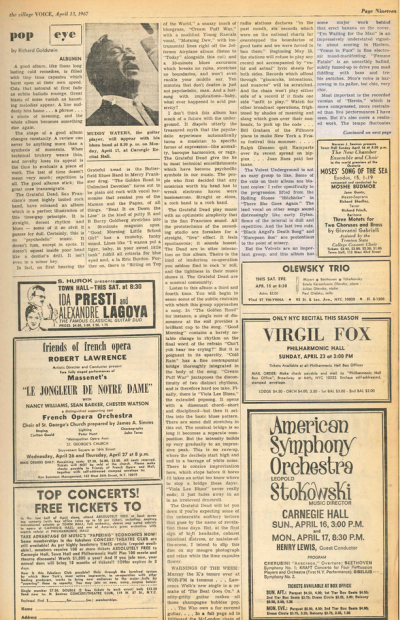 Video of the day. Sesame Street has taken on current zeitgeist show Homeland as a battle between Caaaaa-rie and wolf-in-sheep’s-clothing Baaaa-rody. For your enjoyment: Homelamb.

Another boring and predictable Murdoch salvo at the ABC – sounds like the sort of drivel they’ve tried against the BBC as well. I believe its called ‘trying to get rid of the opposition’ and has nothing to do with how taxpayers money is being spent.
I can’t bear to think of a world where all the news, TV content and opinion came from commercial media – horrifying thought.

What is the obsession with the ABC at the OZ? If this was people, they would be charged with stalking.

Bravo! Michael Millet. All true!
And, of course, we shall decide which media outlet we trust, and the manner in which we read, listen and view it!!!!!
P+ss off, Ltd News.

Murdock’s vision gave us the OZ! Up to five/six years ago we had our first national/quality newspaper staffed with quality journo’s. Rupert then destroyed his original vision. Replacing journalists with progressively ultra conservative opinion columnists. I stopped buying. If nothing else Rupert is pragmatic. He has always focussed on money and power . . . and as he has grown richer, more powerful, he added philosophy and politics. With 70% of the print market plus associated secondary media interests his ‘stone in the shoe’ is the people’s ABC. His media interests have installed our Federal Govt . . and now ‘The Piper’ seeks his due!

Known unto God. In my opinion Brendan Nelson and those others responsible for planning the rewording of the epitaph on the tomb of the unknown solider, should be sacked not defended. Edward James