In Afghanistan, we fought a smart war in dumb ways

Australian troops leave behind a better Afghanistan. We made the right decision to commit. But the prolonged, unpopular campaign could have been fought smarter, says Army veteran and Lowy fellow James Brown. 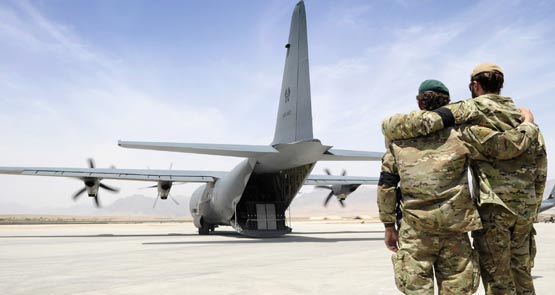 When asked in a Lowy Institute poll earlier this year whether the 12-year-long war in Afghanistan had been worth it, 61% of Australians responded with a resounding no. Yet in two successive parliamentary debates on Afghanistan, all but a handful of politicians have argued that Australia’s national interests were best secured by putting military lives on the line in Uruzgan. As Prime Minister Tony Abbott wound down the war with a visit yesterday, understanding this disconnect is critical to assessing Australia’s performance.

Australia made the right decision to enter the Afghanistan war in 2001. The Taliban was running a safe haven for terrorist groups with a demonstrated intent to attack our allies and friends. Our principal security ally, the United States, judged that an invasion of Afghanistan was necessary to reduce this threat. In such circumstances, it was entirely correct to support this mission with our military forces.

But the mission changed, and as the US became preoccupied with Iraq, Australia’s strategy in Afghanistan became less forthright. Once al-Qaeda was decimated in Afghanistan, and the threat of terrorism in Australia was reduced, Australian governments on both sides struggled to articulate why our military remained. At one stage we were there to reconstruct Uruzgan provinces, so ravaged by war. At another, we were part of a national effort to build a new and more sophisticated Afghan nation. At the end, our mission was simply to train our Afghan replacements.

In a newly released book, the commander of Australia’s fourth Reconstruction Task Force in Afghanistan describes the impact this shifting strategy had on the soldiers fighting at the tactical level. Lieutenant Colonel Stuart Yeaman describes being given his mission by the Australian Defence Force’s Headquarters Joint Operations Command only to find that it simply reiterated the title of his task force, despite there being little to reconstruct in Afghanistan’s poorest province. In Lieutenant-Colonel Stuart Yeaman’s words: “The disconnect between the planning of the mission as a reconstruction mission and the government rhetoric of preventing terrorism became a fundamental failing.” He found “it seems impossible to link the improvements made to the Tarin Kowt Hospital with the aim to defeat Al Qaeda and the Taliban”.

Part of the problem is that over the decade of fighting in Afghanistan, the ADF seems to have forgotten many of the lessons of the East Timor conflict. Like finding a way to tell your story and get the media onside.

“Whatever tactical successes Australian soldiers were having on the ground were divorced from strategic perceptions.”

In Afghanistan, winning on the ground matters much less then the broader perception of who is winning on the ground. Australian soldiers fought this perception war with both hands tied behind their back. Lieutenant Colonel Yeaman describes media engagement as being “quite heavily censored by layers of approval processes in theatre and in Australia, which weakened or plainly stopped messages”. In his view, the defence force had arrived at a Twitter fight with World War I media skills. By the time the Australian government had meticulously crafted vacuous operational updates and media releases, Taliban propagandists had already released three versions of their own story.

Whatever tactical successes Australian soldiers were having on the ground were divorced from strategic perceptions. Winning in the Chora Valley was irrelevant if Australians at home were already convinced we were losing. If successive governments have been unable to persuade Australians to support the war in Afghanistan, it is unsurprising that they struggled to gain the support  of many Afghans.

A recently concluded review in the United Kingdom articulates that when politicians send their military to war, they must be better at making the case for their deployment or face ultimate mission failure. This lesson is yet to be learned in Australia. Knowledge of military strategy within the Australian Parliament is so low, it is bordering on being dangerously negligent.

But it has not all been in vain. A 30-year-old in Tarin Kowt in 2001 had no conception of what a local police chief was for. Now, we might not have developed a corruption-free police force in Uruzgan, but there is a functioning police chief. That’s worth something for the Afghans, and for our soldiers.

The most important question to ask on Afghanistan is not should we have gone or left, but could we have fought a smarter war.

Australia and the US should never have invaded Afghanistan. Will they invade again in a few years when it is again ‘ . . . a safe haven for terrorist groups with a demonstrated intent to attack our allies and friends.’?

Are you saying that $7.1 billion is a fair price to pay for one police chief (even if Corrupt). No mention of lives lost and families fractured both in the coalition countries and Afghanistan.
What a waste of money time and humanity this “smoke em out of their foxholes” exercise has been. Some of us are old enough to remember the rhetoric and how Al Qaeda morphed seamlessly into the Taliban- How war criminals became friends and how many Hazaras have fled to the 4 corners of the earth seeking safety from persecution and massacres.
John Howard in Oct 2001 announced our entry into this brutal sandpit so that we could play with our buddies in the ole USof A, without even convening the parliament. Australians ever ready to follow the leader into whatever fight is on offer did not demur. More fools we.

“the Taliban, with military support by Pakistan and financial support by Saudi Arabia, seized Kabul and founded the Islamic Emirate of Afghanistan.” <– what's to stop that happening again? Or will it be another proxy war?

Surely there were more fundamental issues at stake than unsympathetic media coverage.

Excellent article Jim, thanks. For sure we could have fought this war smarter. But hindsight is a bi%ch. As a relatively small (in comparison to other ISAF nations) contingent, our short rotations possibly played a role in how we could have done this better. Irrespective of intent, new rotations have their own ideas which causes some momentum to slow or outright cease. Reinventing the wheel is inherent with new commands in all theatres. Ours just happens more regularly. Further, we didn’t own the battle space during formative years, the Dutch did, and owned/operated it questionably. One step forward, two steps back was rife under the Dutch who neglected to address real reconstruction/security issues in some key Uruzgan Provinces. What I have noticed is that too much effort has been spent on processes rather than goals. Had we focused on the end-state more instead of bogging down in the cesspit of bureaucracy, I am certain our campaign would have looked a lot more successful (in a reconstruction sense). From a security point of view, our forces conducted themselves marvelously. We dominated the ground in which was charged to us. This built a lot of trust with the indig population and greatly assisted the COIN strategy. But our alliances with some questionable actors played counter-productive in making that a total success. As you correctly state – we appeared to fail learning lessons from East Timor. However, it must be noted that we were the leading authority in East Timor. Under a coalition of NATO/US it is difficult to implement those lessons under an authority who was both uninterested in success and lacked pro-action (the Ducth). Thanks again.